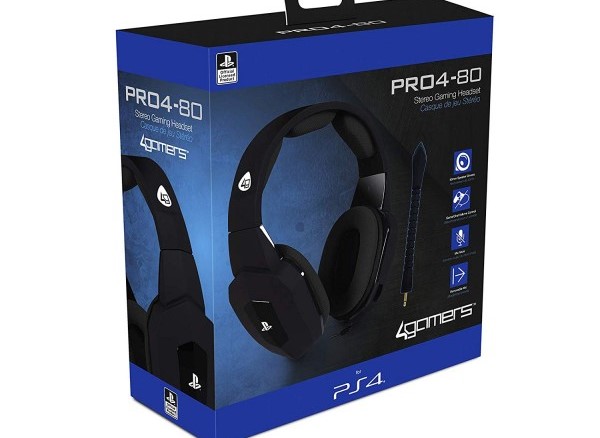 Designed for – and officially licensed to – the PlayStation 4, 4Gamers’ latest headset pitches itself at a very budget-friendly end of town. Obviously it’s not going to offer an experience comparable to headsets three or four times its price, but I was nonetheless impressed with its build and overall quality.

This is a lightweight headset, with a standard headphone jack that plugs directly into your PlayStation 4 controller. As such, the headset also works with almost every device that hasn’t had the headphone jack ripped out in favour of BlueTooth or Lightning connectors. I’ve been testing the headset while playing Astral Chain on my Nintendo Switch. Now, that might confuse people on the train thanks to the prominent PlayStation branding on each of the headphones, but I’m a rebel like that. Confusing people by mixing brands is my gig.

There’s a built into the headset, which is detachable, which is great so you can take the headset out in public without feeling like a fool, and the audio quality that you can transmit through it is actually quite impressive. I’ve been using the mic to record a couple of videos for the DDNet YouTube channel this week, and as you can hear, the voice quality is more than adequate for playing games and communicating with people. That mic is also flexible and has a good range, so will suit most heads, and will allow you to adjust the thing so that you don’t sound like you’re doing a re-enactment of a creepy “heavy breathing into the phone” horror movie.


The only other additional feature on this otherwise no-frills package is a small sound controller located on the cord itself. This controller can both mute the microphone and control speaker volume, and does work with any device. Why you wouldn’t just mess mess with the TV or device volume is beyond me, but the mute function is a good one when using the headset on its intended PlayStation 4.

The build quality of that sound control box is really, really poor, though. It feels like a cheap bit of plastic in the hand, and when I go to move the volume wheel, it’s hardly a smooth process. I inevitably jump from “far too soft” to “far too loud” volume, without ever transitioning through the ideal middle ground. Goldilocks this headset is not.

With that being said, the build quality of the headset itself feels much more robust. It’s build from a lightweight plastic, but has a nice, premium texture which helps to allay any fears of the robustness of the headset. The foam ear coverings are smaller than I would like, and this device won’t give you the natural “noise cancelling” effect that more premium headsets do by covering the entire ear, but it does sit nicely, and is soft enough to be very comfortable. I’m also quite a fan of the overall aesthetic – the headphones have a nice angular design, and the overall understated black design makes this the kind of headset that you can take out in public and use for non-gaming purposes without feeling like you’re carrying an esports tournament on your head everywhere. The only decorations are the PlayStation logos on both sides, and a single 4Gamers logo on the band, and while these are prominent enough to work as branding, they’res also understated, leaving the overall impression of minimalist chic. 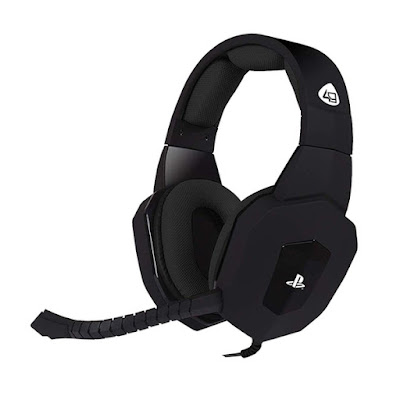 The sound performance is about what you’d expect for a mid-range headset. By that I mean it’s going to broadcast the music and big boom boom explosions into your ears in a way that’s more immersive than relying on your standard TV speakers thanks to its 40mm speaker drivers, but the clarity isn’t quite there if you’re an audiophile and want to listen to a symphony or opera through it. As I mentioned earlier, the lack of any kind of natural or technical noise cancelling limits the value of the headset on, say, a noisy train or airline, especially considering the headset also struggles at the highest volume settings, but at home it’s a great way to play games without disturbing anyone, and has secondary value as an around-the-house headphone. Because it’s so light, I like to throw on some relaxing ambient music, and put these headphones on when I want to read a book, for example.

Not everyone can afford premium headsets. Other people would rather save those headsets and have a secondary set for more day-to-day use. I can see the 4Gamers Pro4-80 Stereo Gaming Headset find its way into a lot of homes on that basis. It’s more than sufficient for gaming purposes, and the lightweight, stylish form factor makes it versatile and comfortable for all-day use. It’s also so much easier to just shove this into the PlayStation 4 controller than it is setting up my studio-quality Blue mic, so I’ll probably continue to use this headset for the majority of my YouTube videos. See – I told you there was a niche for this in the household! Even for people like me with plenty of premium-grade headsets, and sound recording equipment, the lazy (but effective) simplicity of this headset makes it a winner.

The Trials of Mana remake is looking gorgeous!