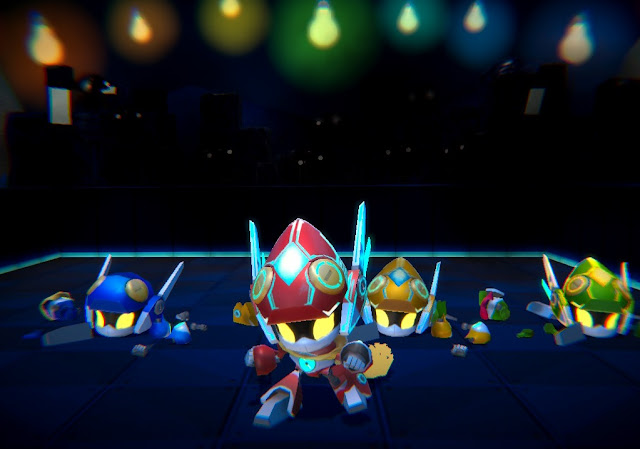 Scrap Rush is what you get when you combine the multiplayer hijinks of Bomberman with Pengo; an obscure arcade game about pushing blocks around an arena to squish enemies. Four little robots are dropped into an arena filled with scrap metal cubes, and they are tasked with pushing and smashing the blocks and each other to stockpile the highest total of scrap metal in a short time limit. This game comes from Acquire, a studio as prolific as it is versatile, and serves to shake up the other competitive multiplayer experiences available on the Switch with its combination of light strategy and fast paced action.

Related reading: Bomberman offers a similar experience, and is also available on Nintendo Switch. Here’s our review of that one

The game’s core mechanics are simple enough to explain. Each player controls a robot in an arena seen from a top-down perspective. They can move on a grid in the four face directions, and can interact with scrap metal blocks by tapping them one square at a time, punting them three squares, or charging up to send a block flying all the way across the arena until it hits a wall. If your robot is unfortunate enough to be stuck between a wall and a hurtling block, you’ll be crushed into a pile of scrap metal for the other players to collect as their score.

Despite the game’s visual similarity to Bomberman, there’s a bit more strategy under the hood of Scrap Rush than the bomb-detonating antics of Namco’s arcade hit. It’ll take a few levels to sink in (and the early ones on offer do not do a great job of communicating this) but success in Scrap Rush relies in your ability to see and predict pathways within the level. There’s a lot of big-picture thinking about where different players will want to go next: maybe they’ll be trying to amass scrap from a densely packed sector of the map, or avoid a large scrap-meteor which periodically drops onto the stage. Since each robot’s push when charged can cover the entirety of a stage, players will always need to be aware of which spaces are dangerous, which are safe, and how they can best find scrap without making themselves vulnerable. 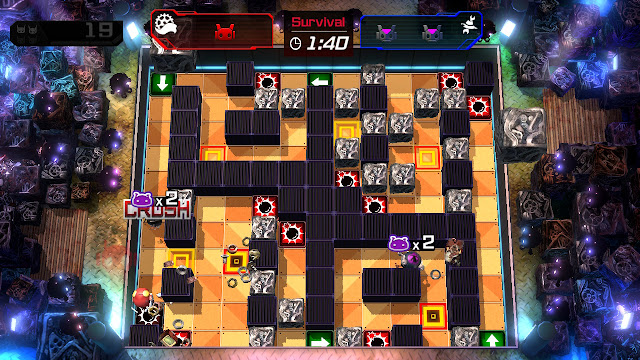 Once you’ve completed the arcade mode twice, you’ll be able to unlock additional modifiers in the in-game store which allow you to personalise your strategy. You can change the types of blocks you chuck out (some are more durable, others are cheaper on your scrap pool, others can explode) as well as unlock additional maps that have complex tile patterns such as warps and direction-switching arrows reminiscent of Chu Chu Rocket. All of these contribute to the spatial nature of the game, and ultimately the successful player will be the one thinking a layer ahead of the opponent.

The game’s AI is serviceable enough but sometimes I felt that Acquire had resorted to “fake difficulty” by pitting the player against an allied team of robots, especially in the later levels. I definitely felt that in the harder difficulties I was succeeding by exploiting inconsistencies in the AI and level design. The arcade mode is still a manageable affair to complete and does teach you how to be good at the game, but it’s not a fair simulation of what competitive multiplayer would feel like. Speaking of which, there’s no online available here – it’s a purely couch based experience. The game does play well with any type of controller setup though, needing only a control stick and three face buttons, and it’s easy to pick up and learn regardless of gaming experience. One more plus to Scrap Rush is that there’s no need for finicky split-screen since everyone sees the same arena – making this one of the few party games which I’d actually consider playable in the Switch’s tabletop mode.

Acquire has packed in a veritable wealth of variety, offering over twenty stages, five different block types, three multiplayer modes, an arcade mode with two difficulties, and a survival mode. You’ll get a lot more bang for your buck compared to many other party games available on the eShop, even if you’ll be playing more alone than with a group. That being said, the mechanics do become a little same-y after a while: there is only so much strategy which can be had with four-directional block pushing, and the AI won’t pose much of a challenge for long. 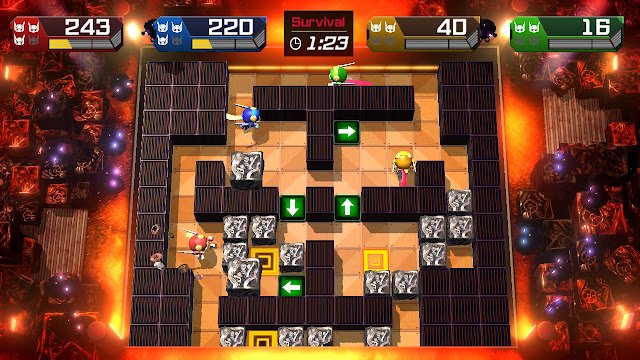 Scrap Rush is ultimately a party game which does a little better than the other party game fare available on Switch at the moment. Its mechanics aren’t particularly novel but they are robust enough to support replayability, and there’s a good blend of skill and chance involved with success. The team at Acquire has successfully tapped into a more cerebral game that’s still easy to understand and quick to pick up and play. If you’ve got a group of friends you play local multiplayer with regularly, this has the chops to make it into the regular rotation. That being said, it might not have the staying power of some of the other local multiplayer classics.