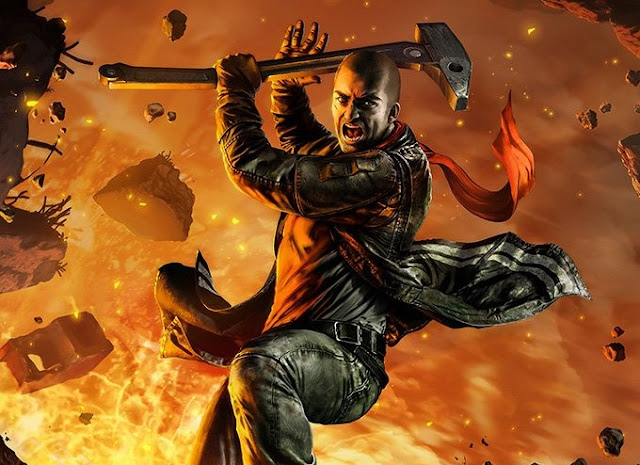 Red Faction: Guerrilla was a major hit for THQ (as in, the original THQ prior to bankruptcy, not the Nordic Games-renamed THQ Nordic). It soared well over the million units threshold, and was a critical darling too; on Metacritic the aggregate score for PS3 and Xbox 360 was a very sound 85/100. Sadly the remaster, which is a perfectly competent effort on the Nintendo Switch, is more notable for demonstrating just how badly open world games age than it is a reminder of how much this game was originally loved.

As an early era open world title, Red Faction: Guerrilla suffers from every issue that modern open world developers have figured out how to solve. The world isn’t overly interesting to explore, for a start. It’s set on Mars, so the red, barren dustiness is expected and appropriate, but the downtime in traversing from one objective to the next is an exercise in monotony. Thankfully, the world itself is relatively small and constrained, but there’s never a sense of “living in” this one’s world, because all you’re doing is following arrows and icons across empty and uninteresting spaces

Missions themselves are entirely generic, and universally feature some variation of “travel here, kill everything” or “travel there, blow something up”. This is sometimes dressed up as a need to protect allies or rescue captives, but in every case it boils down to shooting up a bunch of goons or setting up a large explosion before moving on. If the narrative were more interesting and I were more invested in generic Mars dude-hero’s little war, I might have suspended disbelief to find the quest structure more interesting. That’s basically how the Yakuza games, and Witcher 3 work, after all. If you strip away the ridiculously good storytelling and you’re left with a bunch of fetch quests and combat scenes. But generic Mars dude-hero isn’t Kiryu or Gerald-I-mean-Geralt, and I wasn’t invested in the narrative at any point, so I saw the superficiality of the mission “variety” all-too-clearly. 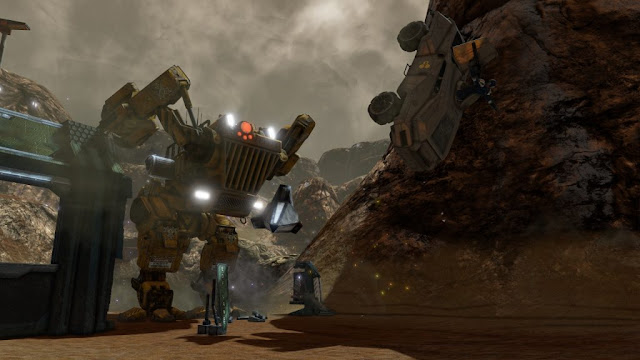 The saddest thing is that there is plenty of potential in there. This is a game in which a previously benign organisation – the Earth Defense Force, or EDF (not to be confused with the giant ant-slaying heroes of D3’s EDF series) – has turned bad, and despotic. You play as a a member of a tiny faction looking to fight back against this newly-evil organisation, and you do that by helping the rebels muster resources, take down key enemy fortresses and…

Look Red Faction Guerrilla is basically Star Wars. Let’s just save the rambling explanation and describe it that way. Star Wars is, of course, a beloved masterpiece of cinema so this stuff can be done well, filled as it is with interesting characters, exotic cultures, and a galaxy of worlds to explore. The problem that Red Faction Guerrilla faces is that it has no interest whatsoever in anything but the next mission. There’s no genuine effort put in to give generic Mars dude-hero a quality character arc, nor were the developers particularly concerned in painting a world of cultures and people – the space you play in doesn’t serve a purpose more than areas to blow things up, and characters aren’t much more than bodies to fill with lead. If you played enough early-era open world games, none of this will be a surprise. Storytelling used to be a real issue for this kind of game. This approach to game design in open worlds has evolved rapidly in the years since, and unfortunately it’s not one that has aged well.

Blowing stuff up is good fun though. It always has been with Red Faction, thanks to the series’ penchant for destructible terrain. Unlike some of the other Red Factions, you can’t level mountains this time around, but any building can be blown up and demolished down to dusty rubble, and that’s something you’ll be frequently asked to do. Running around, working out where the important structural points are, laying down explosives and then stepping back to watch the fireworks is something that doesn’t get old, thanks to the excellent (and realistic) physics that are implemented into the game. The gunplay’s not bad either, though the Switch’s Joycon controllers aren’t great for the highly sensitive aiming that this game demands of you. Play this one with the Pro Controller if you can. 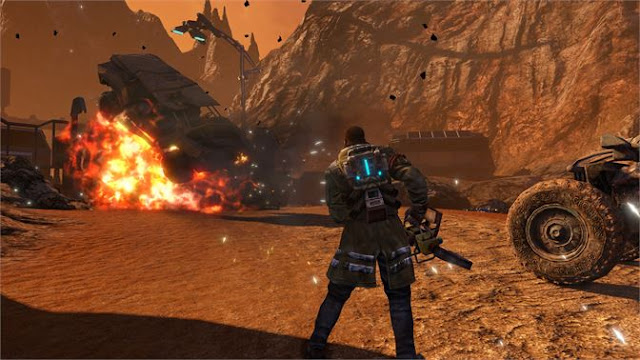 Difficulty spikes – another holdover from the previous era of open world games, finds its way into Guerrilla too. There’s a decent amount of freedom that is provided to the players in terms of how they can go about their missions. Once the jetpack and expanded range of explosive weaponry is unlocked, you’ll feel like you’re in control of a one-man army. It’s just that you’re going to need every trick up your sleeve, because enemies are both bullet sponges and have a habit of attacking on multiple fronts, making for dynamic but often frustrating combat scenes.

There’s multiplayer in this game, but as I never bother with multiplayer, I haven’t touched it here. Unlike some other titles it doesn’t appear that I’m missing out on anything overly important in the single player game by giving multiplayer a miss, which checks the right boxes for me, but based purely on the standard of the gunplay, and the explosive fun with the destructible terrain, I could see this one being a fun time for people who do like the multiplayer hijinks.

There’s nothing outwardly wrong with Red Faction Guerrilla, and the HD remaster is handled competently. On the Nintendo Switch, and particularly in handheld mode, it actually looks really nice in capturing that grim-Mars wasteland. Sadly, open worlds age far worse than most other approaches to game design, and while I can quite happily recommend HD remasters of JRPGs that originally appeared on PlayStation 3 – or even PS2 or PS1 – because it’s the unique and timeless narratives that people play them for, open worlds lose their value rapidly. Everything that a title like Red Faction Guerrilla has done, newer releases have done better… and where does that leave Red Faction Guerrilla?

Damnit, the new Utawarerumono game is a F2P mobile title…