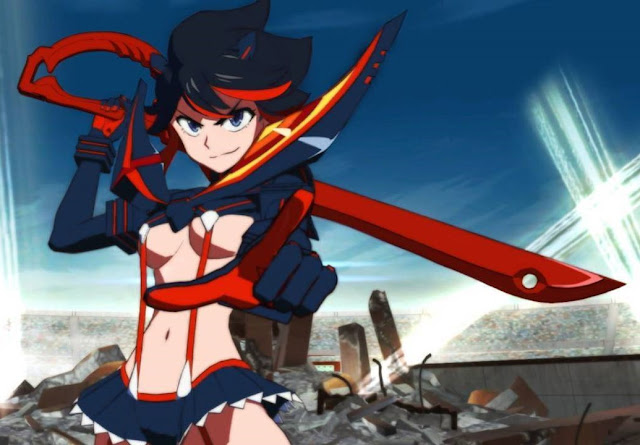 When I think about what defines Kill la Kill, I think of relentless energy – a hyperactive, kinetic, punk-like mashup of explosive, over-the-top action. If that sounds like it’s the perfect material for a fighting game, you’d be right, but it’s harder to pull off that kind of extreme energy than you might think. It’s a testament to the quality of the Kill la Kill game that it’s exactly what the developers have managed to achieve.

Fighting games are usually more deliberate than they first seem. The action on screen looks like the players are bashing away at the buttons at a frenetic pace, but in truth a practiced fighting game player has an almost rhythmic control over what they are doing, with very deliberate pacing when it comes to the rate that they’re pressing buttons. It’s hard to see Kill la Kill in that light initially, because the relative simplicity of the controls (melee, ranged, guard break, and aerial and special versions of each) are so simple in design, and the action so twitch-like responsive on screen. The urge to “button mash” will be instant and extreme with this one.

You’ll lose if you do that, of course. You’ll lose to the very weakest opponent AI. I should know: I lose in Kill la Kill frequently. I am actually very bad at this game, and that partly has to do with it being an arena fighter, and way out of the way of what I usually like to play (the dismal Jump hero-based brawlers by Spike Chunsoft and Bandai Namco have long put me off this particular genre). It also has to do with the precision that the game requires to really master, and I struggle to get out of the mindset of button mashing when I see the fireworks kicking off on the screen. 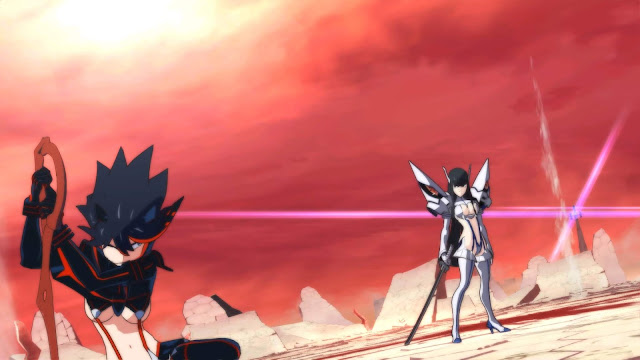 I enjoy losing in Kill la Kill, though, because it’s just that enjoyable. The action is smooth and slick, and while there’s only a small cast (less than a dozen fighters), this is actually a strength rather than a weakness. There are no balancing issues, nor “tiers” of fighters, as far as I can tell. Every character is supremely balanced, as far as I can tell, with no characters have a distinct and insurmountable advantage. At the same time, every character feels distinctly different to play. Some have a greater emphasis on melee, while others are more comfortable at range. Some are more naturally nimble, while others are the kind you want to avoid getting too close to, lest you be pummeled into the dirt. Each of these strengths feels like a genuine advantage, and a big part of the combat system is figuring out how to close the gap from a ranged barrage, or stay just out of the way of the heavy hits. In other words Kill la Kill offers the kind of combat system that I prefer, as it’s one based on skill rather than combo memorisation.

The one and only frustration that I have is that it’s easy to get caught up in an onslaught which, while pretty, means that there are lengthy seconds where all you can do is watch your character being beaten into a pulp. I’m not such a fan of fighting games where the systems allow you to get caught in lengthy onslaughts, as it’s irritating having to watch them through.

Rarely for a fighting game, Kill la Kill does seem like it wants you focused on the single player experience. The narrative is surprisingly rich and ambitious, melding moments from the anime in with new scenes. While this probably limits the appeal of the game to existing fans, it’s not like a licensed anime game is ever the right introduction to a property in any event. The only people who were ever going to buy into this are existing fans, and this narrative has been built with them firmly in mind. 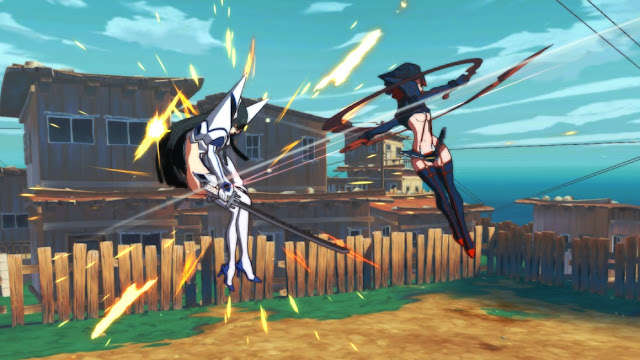 The good news is that Kill la Kill also continues admirably in the series’ boisterous deconstruction of the shonen manga design and the likes of One Piece, Dragon Ball, Bleach and Naurto. Despite featuring the same basic structure as these stories – an endless quest for power by the main character as they overcome one increasingly powerful opponent after another (often with actual, literal rankings to suit the Japanese predisposition towards hierarchies) – Kill la Kill inverts the gender norms of the format by making the women the powerful, aggressive, and heroic fighters, and relegating the male characters to more auxiliary roles.

Similarly the anime exhibits ridiculous and extreme fan service, as is common in shonen, but here does so in response and as a deconstruction. As noted in one analysis of the Kill la Kill anime: “Perhaps the strongest way in which the narrative actively resists being slotted into a box marked “gratuitous fanservice” is the way in which it actively focuses its plot on the way its female characters react to and contend with the experience of being looked at and forced to strip down in order to fight. In fact, the Japanese title, Kiru la Kiru, is a three-way pun on the meanings “cut” and “wear,” which are both pronounced “kiru.” On one level, the title means Cut to Wear, a reference to the suit’s skin-grasping powers. On another level, it’s an imperative: Ryuko literally has to cut away at her clothes to wear her outfit as a weapon. At one point she proclaims, “I was rejecting you out of embarrassment!” as she finally “masters” the suit and its potential as a weapon.”

Unfortunately the commentary around the fan service is somewhat muted within the game, but at the same time the game does explicitly reference back to the anime and its narrative strength rests on some assumed knowledge of the anime (again, who would actually be playing this if they weren’t fans of the anime). Assuming, then, you understand exactly why all the characters are wearing “armour” that may as well not be there, Kill la Kill the game will continue to work as a satire and deconstruction of shonen and the expectations that people have for this kind of anime and fan service. 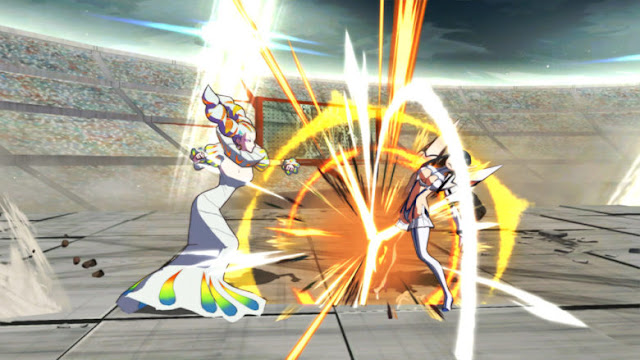 For fans of Kill la Kill, this narrative is going to stand as a stylish and welcomed complement to the anime, and the sustained nature of the story, combined with its significant production values – perfectly capturing the B-punk aesthetics and visual stimulation overload of the anime – will more than make up for any disappointment in terms of the content with there only being ten or so fighters to choose between. Additional modes beyond the narrative are relatively thin too, though the multiplayer is rock-solid and intense, and there’s a fun little diorama mode to mess around with once the fingers get tired from the action.

Kill la Kill is an anime licensed tie-in fighter done well, and given how frequently these turn out to be terrible that in itself is a relief. It’s fast, it’s furious, it’s explicit and fanservicey, and it is outright hilarious in its satire. The developers have nailed every element of Kill la Kill that needed to be done right, and I can’t imagine fans wanting anything more from this particular game.