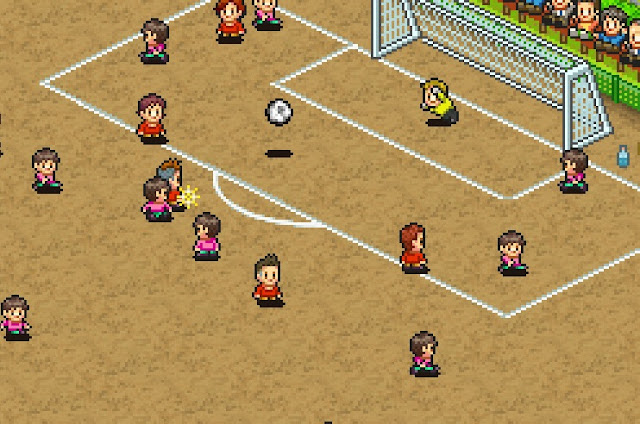 It becomes very easy to overlook Kairosoft titles after you’ve played a couple of them. The downside to their consistency is that it’s easy to become complacent about them, and this is particularly true given that the company has decided to release them on the Nintendo Switch in a veritable flood. It’s a pity that it happens, though, because they are good, reliable, consistent fun, and Pocket League Story is another example of that.

Related reading: Kairosoft’s first title – and one that many still think is the best – is Game Dev Story. Our review of the Switch port of that one

Pocket League Story is Football Manager in the Kairosoft way. You need to take a team of hopeless players, and through training and recruiting better players, turn that team into a championship-winning outfit. You have no control over play on the field, but rather the decisions you make between matches will determine the on-field performance. From the team formation, to the coach you recruit, the training regime you set, the training ground facilities you build, and your ability to keep fans happy (by not losing too many matches), there’s quite a few factors that can mean the difference between victory and loss.

Of course, there’s none of the spreadsheet management of the real Football Manager. You earn points through training ground facilities and match performance that you use to increase the skills of your players, and recruitment’s simply a matter of spending money on a desired player until they join the squad. Football Manager has negotiations, club regulations, salary caps, transfers, and about a hundred statistics per player to track. Pocket League Club distills that down as far as possible, and while the result is almost too simple, this game is accessible in a way that more complex simulation titles could never hope to be.

Match day controls are incredibly limited. After setting the formation, there are three team mindsets that you can toggle between. You can direct your team to play the ball long (passing it upfield at greater frequency at risk of losing it), dribble it (hold on to the ball, for greater security at the cost of open fields), or a neutral stance. That’s all you need to worry about. There’s not even the option to bring substitutes in mid-match, because players can’t get carded, injured, or tired.

As with all football managers, you’re forced to sit through and watch each match play out in full. This isn’t an issue in principle – developers of these games want you to connect with your teams, and watching them play their matches out does that. Especially when the characters are as cute as they are, drawn in Kairosoft’s trademark style. Its also to Pocket League Story’s benefit that matches are sped up so they’re over in just a couple of minutes. That being said, the absolute lack of managerial control over matches makes each loss frustrating; with the proper Football Manager if you find yourself behind midway through a match you can try different tactics, bring on fresh legs, focus defence on a particularly dangerous player, and other tricks to try and claw back a losing position. With Pocket League Story, all you can do is sit there and (often) watch a loss slowly blow out.

That’s the main consequence of taking such a minimalist approach to a football manager game. When there’s only a few statistics that determine each player’s capabilities, whatever team is stronger on paper is almost certainly going to win. Having dropped so many hours into Football Manager I know it’s possible to craft some amazing underdog wins when the strategy comes together just right. Pocket League Story simply doesn’t have the depth or strategic options to make that happen. 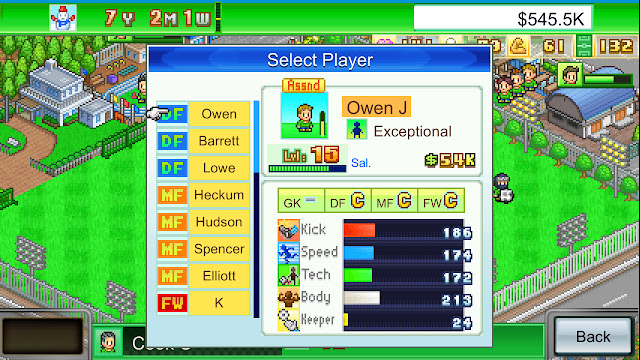 With that being said, it is a delight to play. Kairosoft’s little pixel people could never be accused of lacking personality, and watching their little stubbly legs shuffle over the football field never gets old. I was actually reminded of Nintendo Football Club – one of my favourite Nintendo 3DS titles. This one has even less depth than that one, but the colourful charm is similar, and where you need to be in a very specific mood for a spreadsheet simulator like Football Manager, something like this works at any time, for any mood.

Pocket League Story is a Kairosoft game, so there’s no real way to fail, and success is simply a matter of grinding away. Even compared to the other Kairosoft titles, this is explicitly apparent, and unlike some, where there’s a time limit and high score at the other end, there’s no particular pressure to “play well.” More than anything else, it’s this that actually disappoints me about Kairosoft. All the systems are there to provide entertaining, albeit minimalist, simulators, but the unwillingness to let you fail when you play means that you’re effectively playing a clicker or variation on Farmville, and ultimately that pointlessness does wear down on how enjoyable each game is to actually play.

It’s testament to the charming quality of Kairosoft titles that you’ll keep playing them, even after realising how utterly pointless they are. Pocket League Story is another example of this. You’ll keep telling yourself that there are better options on the Switch for both football management and simulation… but then you’ll find that you keep coming back to this because that good-natured charm and colour is simply irresistible.