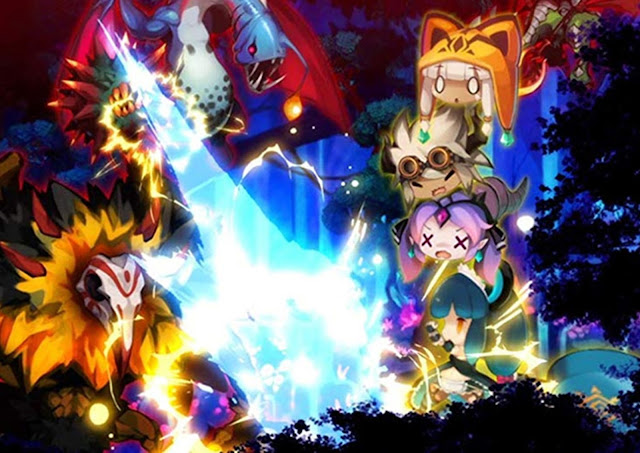 My favourite thing about Lapis x Labyrinth is how your average party of four dungeoneers stacks on top of each other – affectionately referred to as “dango” by their developer (although not in game). It perfectly captures the energetic, lighthearted tone the game goes for – a platformer action-RPG that’s light on the narrative and mechanics in favour of fast pacing and a compulsive gameplay loop. Ultimately, the experience weighs a little shallow in the face of other offerings on the Switch, but it’s still sure to be a delightful time for those looking for a quick distraction on their daily commute.

My favourite thing about this game is that it’s consistently kinetic. There is no downtime once you’re tossed into one of the game’s dungeons – you’ll be racing against time to find a variety of purple gems hidden around the level, while killing any enemies along the way. Occasionally you’ll walk right into a gauntlet of baddies which will see you juggling around the more dangerous foes while cleaning up with area of effect skills. After completing a few floors, you’ll face a boss encounter (usually a powered up regular enemy) and get sent back to the hub world ready to start the loop again. You can go from town to dungeon and back to town in the space of 10-15 minutes, meaning you can squeeze in three or four dungeons into your average morning work commute.

There are also many mechanics designed to make dungeon exploration as fast as possible. Once you’ve filled up a meter, you’ll activate Fever Mode which causes gems and treasure to erupt from nearly every surface – challenging the player to cover as much of the floor as possible while smacking jewels out of the walls. Opening treasure chests in succession without getting hit starts a separate multiplier which offers players higher quality loot. There’s also a giant phantom which appears if you dawdle too long on one floor, which immediately ends your run attempt if you touch it. 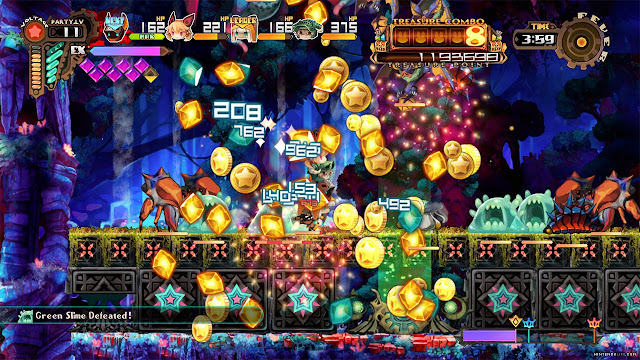 Lapis x Labyrinth offers eight distinct character classes, each of which bears a different attack pattern, specials, and team bonuses. Combat is a simple affair – the Y button performs a basic attack combo, the X button plus a direction activates one of four special moves and A summons a teammate to do a quick move before jumping back onto your stack. The game’s classes vary in design (there’s the usual Mage, Gunner, Dark Knight, but also more unusual heroes, including a Necromancer and a Maid), although their gameplay remains fairly similar. Each class’s offensive options are good enough to get through any of the floor’s challenges, although some are less fun than others.

Party composition is the game’s biggest draw – once stacked atop each other, your four heroes bear a formidable punch. Although it’s just the one at the bottom who is considered “active”, your whole tower is involved in the action, you can unleash powerful team attacks with the R button, and you can jump a little higher by dropping teammates like Yoshi’s in Super Mario World. You’ll quickly figure out which classes are your favourites – I gravitated towards the Hunter for her specials that could double as tools to help me get around the levels – but it’s great that the stack of four heroes effectively function as four lives, and you’ll be able to switch out to characters better suited for certain scenarios if needed.

The combination of fast paced platforming and rapid, melee-focused action RPG combat threw me right back to my MapleStory days, and the initial comparison is apt: I imagine NISA’s game is looking to scratch the same itch of short dungeons, quick combat and incremental progression. When I think back to MapleStory I don’t quite resent the hours upon hours of grinding I did to access the harder areas, but I was a different person then. Lapis x Labyrinth’s combination of repetitive levels and lack of gameplay variety eventually wore me down. 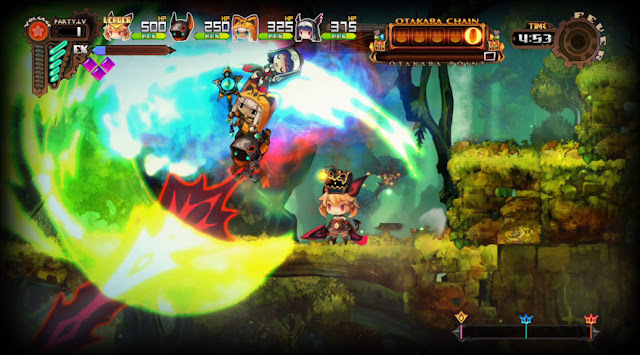 Generally it’s the small things which irk me at first. The camera is just a little too zoomed in, which I imagine was to highlight the intricate art, but instead made exploring the dungeons and finding the last purple crystals a chore. This is especially true as levels became more complex and introduced things like teleporters and springpads, and it became cumbersome to contend with a camera that only shows two jumps worth of screen space. Similarly, the visual info can get cluttered during combat – the damage numbers and particle effects from attacks can sometimes cover up enemies entirely, and everything is exacerbated in Fever Mode where you’ll have a hard time seeing anything that isn’t a gem. The damage your characters take and the damage you dish out is represented in the same font and colour, and the controller vibration for killing and enemy and for getting hit were also too similar.

These small issues funnelled into larger problems I had with the game’s difficulty and progression. I noticed that stages either tended to be too easy – running through mashing the basic attack button and destroying everything – or too hard – getting hit by one or two wayward projectiles and immediately getting a game over. That middle ground that marks a good RPG experience is fleetingly rare to come by. It’s not helped by the game’s odd loot system, which eschews character levels and determines a hero’s stats purely on the equipment they wear. Each piece of equipment has a level, and the party’s gear collectively can’t surpass a certain level limit at any given point, although this limit can be increased through the game’s crafting system. Ultimately it means that you’ll be at the mercy of the game’s random drops to be strong enough to make your way through the later levels.

The combat may have been a little too simplified here – there’s barely any strategy involved, and although the specials can be useful, too many classes have duds. The Cleric for example, has a special that attacks straight forward, locks her in place and is actually less effective than when she uses her basic attacks. You’ll also be stuck with the same specials for the entire game – there’s no unlocks, modifications or new classes to discover – so you better settle yourself in. It’s also a game where the controls feel a little too unresponsive for the speed of action that it supports. 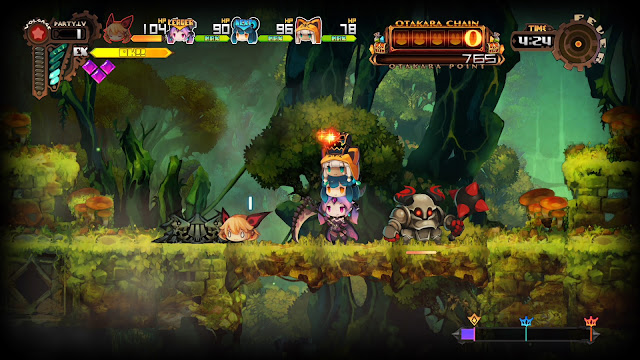 The sum of all that is that Lapis x Labyrinth is a game that I can’t stand playing for long sessions. Each subsequent dungeon adds to a sense of samey-ness that makes me want to switch to something else instead. The biggest indictment for me is that the game itself seems so excited all the time – it’s all about big rewards, treasures and gemstones exploding all over your screen – but after each level you’ll receive weapons and equipment that are of insignificant benefit to you, and even if the stat boosts were relevant, they would only give you access to more stages resembling the ones which came before. A little excitement is great, but once it’s the main thing the game offers, the novelty soon wears off.

That’s not to say that Lapis x Labyrinth lacks good ideas. At the very least, it keeps players moving and active. The art is also a delight to behold, when the monsters aren’t completely being obscured by damage numbers and particle effects. If you’re planning to play a grindy dungeon crawler in short bursts over a long period of time, you’d be in the best position to get something out of Lapis x Labyrinth – but if you’re looking for something a little deeper than a button masher you might walk away disappointed.