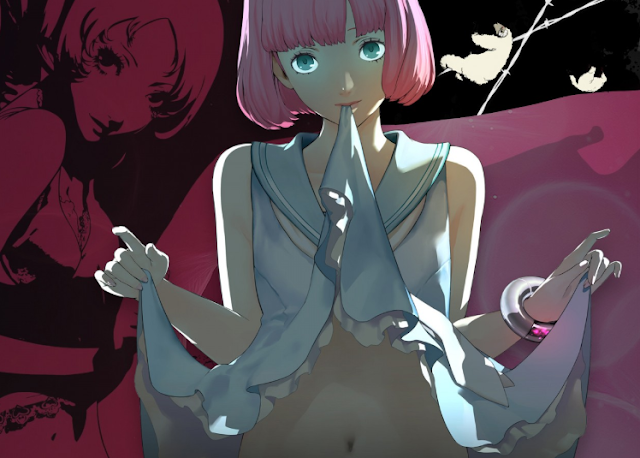 One of my most stand-out blind spots, in terms of games that I have not played, has always been Catherine. As a game that has the reputation for offering up an unflinchingly adult look at relationships and sex, as well as Japanese youth culture, it’s something that I’ve long known would likely land squarely within my area of interest, but I did miss the original release on PlayStation 3.

Now an enhanced “port” is on its way to PlayStation 4, as Catherine: Full Body. Not only is this a souped-up version of the original, allowing the gorgeous cel-shading art from the original game to really shine, but it also adds substantially to what the original offered. Where in that game there were two principle female characters – Catherine and Katherine – for your protagonist to interact with and… have relations with, in Catherine: Full Body, there’s a third – the rather adorable and mysterious Rin.

I had the chance to get some hands-on time with the first hour or so of Catherine, to finally see what the fuss is all about. I’m sold on it completely now, and can’t wait for the full release later this year, so I can see how everything plays out. And just as a note to everyone in the comments, please don’t spoil this one on me. I really have managed to keep myself out of knowing anything of substance about it, and I get the sense it’s one that I’ll want to experience “fresh.” 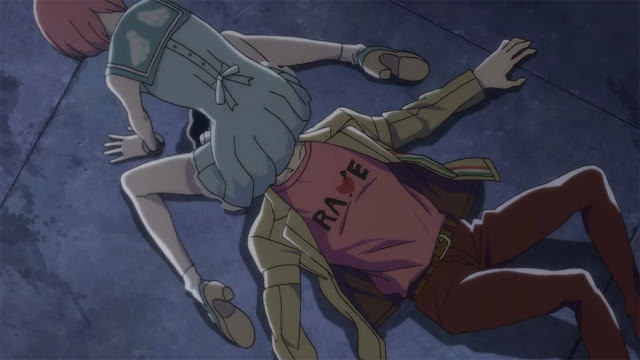 Immediately, the “hero” of Catherine paints a picture of a protagonist that you just know you should not like. Vincent’s in a long term relationship with one of the women – Katherine (the one with a “K”), but he’s a bit of a loser. He’s simultaneously bored with life, and comfortable with where things are at. He spends an ungodly amount of time at a pizza bar with a bunch of loser friends, and (via a series of dialogue options) can either be a decent enough fellow to Katherine, or a bit of a jerk.

His whole world gets upended, though, when he starts having nightmares in which, dressed as a sheep, he needs to clamber up a tower while being chased by an oblivion below. Meanwhile, two temptresses enter his like – Catherine (with a “C”), who he sleeps with almost instantly, and Rin, a rather sweet girl that he has a bond with, after helping her escape some kind of demon of her own. Rin doesn’t have much by way of memories, so she hovers around the pizza bar, playing piano, and hoping to recover her sense of identity.

I assume that at some point you’ll be able to get Vincent to sleep with Rin as well. I’m rather glad that this will be my first play through of Catherine, as Rin is so perfectly integrated into the plot that I can’t imagine how the game would work without all three characters – as an “update” Atlus has done a superb job from that perspective. There does seem to be a lot of branching narrative opportunities in Catherine, with a “angel” or “devil” meter popping onto the screen to reflect the impact that your decisions have – a little like the “paragon” and “renegade” morality scale in Mass Effect. Obviously I couldn’t see how all that plays out within the hour that I got, but there are multiple endings to Catherine, and the journey getting there seems to be pretty varied as well. 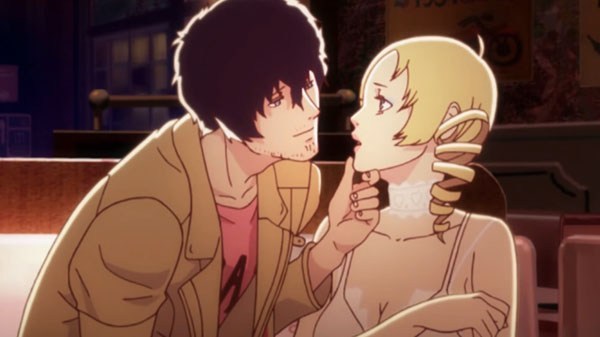 Another thing that I find very intriguing about the game is the heavy use of Christian symbolism in the nightmare world. From images of crucifixion to depictions of angels, and references to the Tower of Babel, Catherine is filled with that heavily spiritual symbolism, and I’m curious to see the role that it plays. Of course, Vincent’s transformation into a sheep in the nightmare world is likely a reference to the whole “lamb to the slaughter” phrase from the bible, and I’m almost certain that Catherine (with a “C”) is either a literal or metaphorical succubus – because you can’t have a video game about sexuality without female temptresses and a fear of sexuality. What point the game is making about all of this remains to be seen… but it’s pretty clear from the outset that it’s a core theme.

Given that it’s my first time with the game, I wasn’t sure what to expect from the puzzles either, but I’m intrigued by them. The idea of scaling a tower by shoving blocks around and using items to manipulate the environment appeals to me, a dedicated Sokoban fan from way back. Early on the puzzles aren’t too challenging of course, but I can see the potential for them to become difficult, especially given that there are big treasure hauls in hard-to-reach places, and you’re always hard up against a deadline, as some monster is crawling to you from the abyss. I didn’t get to test it out, but I am greatly intrigued by the potential of the “Tower of Babel” mode – an endless climb challenge, perhaps? I’m looking forward to that.

I went into this hands-on with Catherine knowing as little about the game as possible, and I came out with a sense that I now know why the game is so celebrated. This kind of deep and mature look at relationships and sexuality doesn’t come along very often, and it seems to be both genuine and fan service-free – which was good to see. The game releases in September – look forward to it.