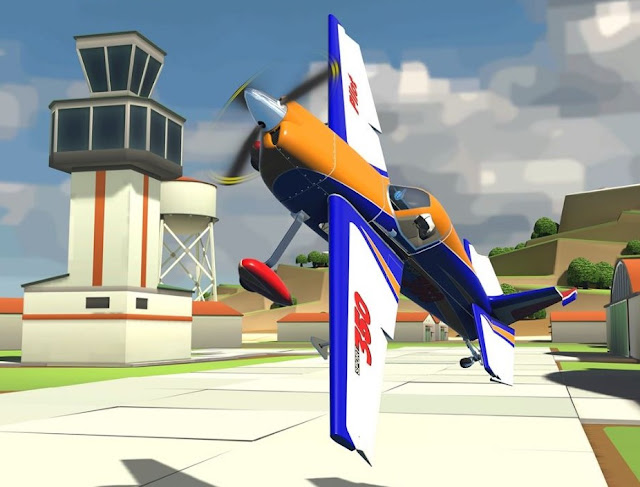 Ultrawings is an excellent arcade-style flight sim, developed by Bit Planet Games out of Dallas, Texas. It’s also perhaps the first game which I would say is not as good on the Switch as it is on other platforms – for various reasons that I’ll get to – but if you’re looking for a flight simulator on the go, this one is still well worth your money. It’s an open world game jam packed with different locales, diverse challenges, and many different types of aircraft to pilot. It hits the spot for non-violent flight games more interested in acrobatics than dogfights, and carries the torch of games like Pilotwings nicely. The Switch version is just missing a few features which elevate the game’s strengths even further.

The game is split into several islands, each containing a variety of flight challenges. The expected classics like flying through targets and landing in designated spots are there, but players who are veterans of the Pilot Wings formula are also thrown some curveballs such as taking photographs mid-flight or popping balloons with a dartgun. You can also use free-flight to explore the islands at your leisure.

The challenges really show off the game’s controls and the care in which Bit Planet Games have tuned the physics engine. Flying through rings would be boring if controlling your plane was too simple, but Ultrawings uses a robust system of banks and yaw control to let seasoned players demonstrate their skills. Missions are graded based on your time and accuracy, and manage to get very demanding as the game progresses. Each island has a different set of challenges (some types might not appear in some places) and with each successful mission you’ll earn money. 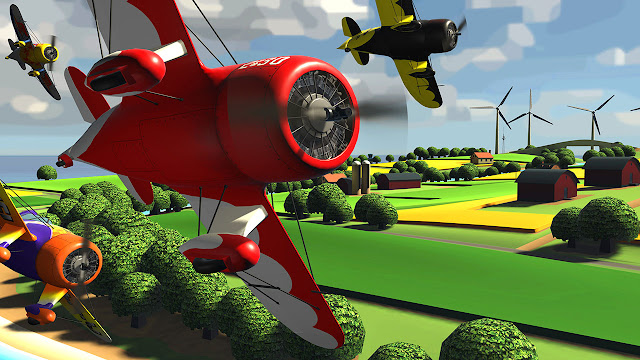 While there aren’t any upgrades or small purchases you can buy in Ultrawings, money will still prove very important. The main things you’ll be buying are airports and aircraft, and their prices rise steeply. This is how Bit Planet Games gates your progression – you’ll need to complete a fair share of the missions in your starting island before you can go off and buy the airport to your second one.

Unfortunately, you’ll need to free-fly and land at a new airport before you can see how much it will cost to unlock it, with some islands being far more expensive than others. There’s also no mission select screen – if you want to do missions on an island you previously left, you’ll need to free-fly all the way back there. The whole game’s design seems to foster a no-HUD approach: all the necessary indicators on your aircraft are visible dials and buttons that you’d expect to see on an aircraft, and the mission select screen is an office with a laptop: no menus in sight.

This of course all makes sense when you remember that Ultrawings was designed with VR in mind. If you imagine what it would be like to move the first-person camera by tilting your head, the game’s various missions which require remarkable spatial awareness become much easier. As it is on the Switch however, I occasionally found myself flying through a ring with no way to see where the next one was: I would then have to pan the camera with the right stick furiously as the plane kept moving, and then memorise the patterns of the targets for the next time I tried the mission. 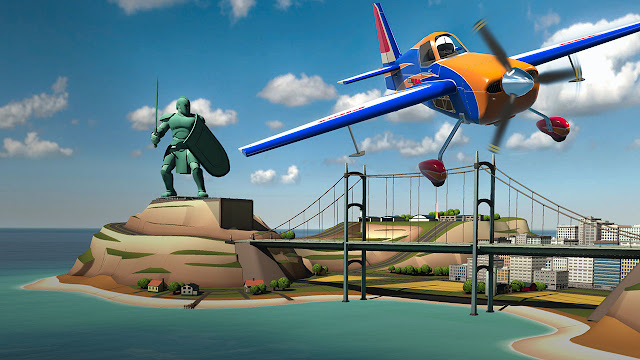 The graphics also take a slight hit for the transition the Switch. Ultrawings uses a bright and colourful, blocky artstyle, with slight variations on each of the islands. The draw distance is impressively long, as it would need to be to give the proper sensation of flight. But on the Switch, it’s very noticeable when a whole island is moving from lo-fi to proper rendering, and the entire game makes a stutter as it happens. Even with full texture rendering the environments have some ugly contrasts at times; the water seems cel shaded and cartoony, the sky seems almost photorealistic and the land bears the soft malleability of plasticine. Together, it can be hard to get a grip on what you’re looking at. These graphics are noticeably smoother on the PC and PlayStation 4 versions of the game.

That’s not to say that the game isn’t still a blast to play however. The missions are on the whole a lot of fun. I particularly admire how the game keeps you doing slightly different tasks as to not let the monotony set in, and the experience of learning to pilot new aircraft (and they all feel very, very different to control) is a joy in itself. This is a game which slowly lets you acclimatise to its complex control scheme, until you are effortlessly gliding in curves and banks through the sky, hitting all the targets with the slightest flick of your thumb. There’s also just so much to get through, and you’ll be hard pressed to finish all the game’s challenges with a gold medal.

If all of this sounds interesting to you then you owe it to yourself to give Ultrawings a try. It’s flight sim developed by people who clearly love the genre, and want to give players a hearty challenge and a way to show off their skills. There are a few features missing from the Switch version which other platforms do better, so it’s best to ask yourself how important the benefits of the Switch’s portability will be to your enjoyment of this game.