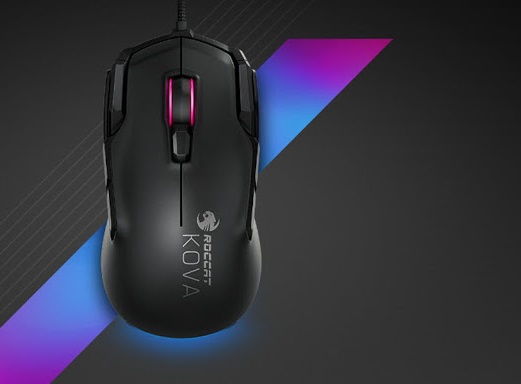 There is a lot to like about the Roccat Kova AIMO Mouse, from its sturdy build to its ambidextrous design. It is an affordable midrange option for those in the market for a gaming mouse, though it may lack some of the bells and whistles found on other mice as well.

The initial sales pitch around the Kova AIMO is in its versatility. Ambidextrous mice are great if you do tend to switch hands, are left-handed, or have to share your game space with someone who has an opposite handedness from yourself. I personally have my own setup and I am right-handed and as such I tend to prefer a mouse that is made with righties in mind, but there is still a lot to like about this particular offering.

Continuing the theme of the marketing material, there are numerous customisations that can be applied if using the Swarm software by Roccat as well. There is both a blessing and a curse baked into this software, because it can feel a bit chunky and clumsy at times, but there are a lot of options as well. I mean a lot. You can have multiple profiles that are simple to swap between, control the lighting, adjust DPI settings and assign custom actions to each of the buttons. These kinds of customisation options are usually only found on much more expensive mice. The only downside is the software is not overly intuitive due to the number of options at your fingertips. 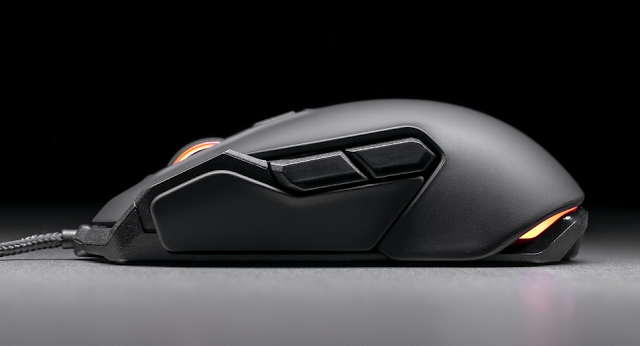 I mentioned the lighting, and it is worth noting that this is not the most colourful option, for people that care about it. Whether that is a good or a bad thing is clearly a matter of preference, but I can appreciate the black design (which was the model I received, though there is a white one with dark accents available as well) and the subtle band of light curving around the back of the base as the only real point of illumination. Roccat itself has many flashier items, butt this one is definitely a bit more understated than some of those other designs.

In terms of the actual build, the body is plastic making it light. If you prefer the heft of a metal mouse, the AIMO might feel less substantial, but the design is of average size and sort of a chunky form factor that does not make it feel cheap either. The buttons on either side of the mouse (two on each side) are easy to reach. They have a hefty sort of stiffness to them that again, is a matter of preference. I have relatively large hands and I am a heavy clicker, so it does not bother me at all, but younger or smaller hands might not like having to exert so much pressure, especially in games that have many, many rapid clicks. The scroll wheel is sturdy and tracks well, and I always appreciate a nice braided cable, which this provides.

From a performance standpoint, the buttons always feel like they click solidly, which is in-line with my observations about them feeling just a bit stiffer. They feel a bit more substantial, but I never felt like a click misfired. Tracking was solid, and you can do a lot of DPI customisations in the software. Jacked up all of the way to a maximum setting of 7,000 DPI, I never noticed any lag and when using it on a nice mouse pad, I never saw any sign of pixel skipping. Some people might want a higher DPI, but this is as high as it goes. 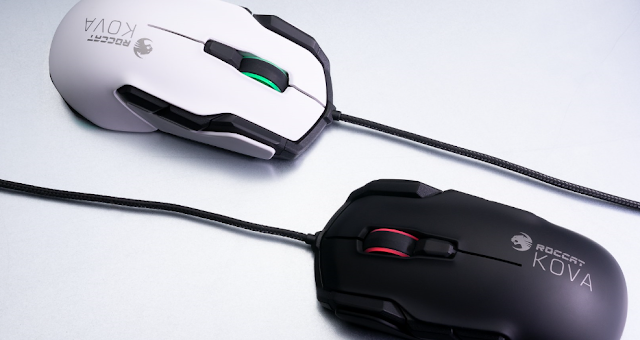 A few years ago, Rob had the chance to review the Roccat Kova and he was generally quite favourable towards it (with a 4 out of 5 star score), so I was curious to see how well my thoughts aligned with his on this updated version. My general impression is that we liked a lot of the same things, and the updates and better price make this a worthy successor for those hunting for a decent midrange gaming mouse. Roccat deserves credit for doubling down on the things that originally worked well for the Kova, though a few of the shortcomings were inherited as well. It still provides plenty of value though, given its price range of less than fifty dollars.