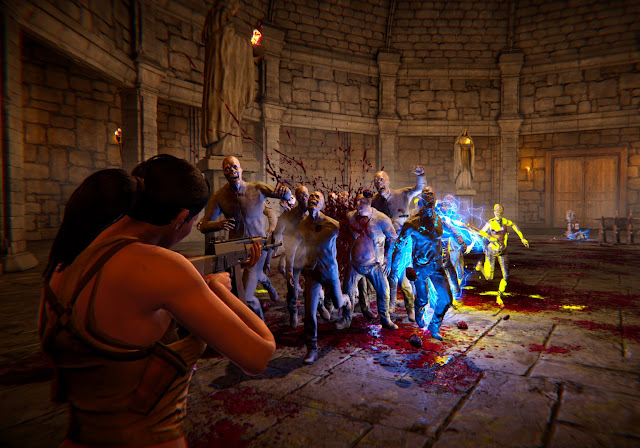 One of the best things about the Nintendo Switch is that so many games are released on it each week. A lot of it is really great stuff, too. Where the Wii U, and even the 3DS, were largely sustained by Nintendo and a select handful of niche third parties, the Switch has been – and continues to be – an utter free-for-all. That means the console has such a delightful mix of mainstream and niche, indie and big budget, western and Asian, that there’s truly something for everyone.

The flip side to that particular coin is that the Switch also ends up with abysmal trash like Blood Waves, which is one of the worst games I have ever played. If not the worst. Blood Waves is, in theory, a game based exclusively around a horde mode, and a little like Killing Floor in the way that it tries to be a brutal, bloody, horror-themed take on the genre. The screenshots on the eShop leave a pretty good impression, too. It turns out that they’re deceptive as they’re taken from the PC version of the game and the Switch release has nowhere near the visual fidelity, but they nonetheless succeed in making Blood Waves look like it will be a generic but competently made brainless shooter. Horde modes are fundamentally good fun, so at a cheap asking price, it’s appealing. But then you start playing, and it all instantly falls to pieces.

Within the game’s one arena poorly-animated, AI-bereft enemies charge right at you, waiting for you to shoot them down. They have the upper hand though, because the weapons in the game control horribly, meaning that aiming is your real enemy in this game. Furthermore, enemies are bullet soaks, meaning that every time your clip runs out, you need to run in a circle while reloading as a growing horde of the idiot zombies chases you around. It’s possible to dodge, but there’s also a delay in the dodge animation playing out, meaning that you’re actually more likely to get hit by the enemies when using it. Dodging also cuts off a huge chunk of stamina, which you’ll need for the melee weapon, which you’ll resort to frequently because at least with it you don’t have to aim. 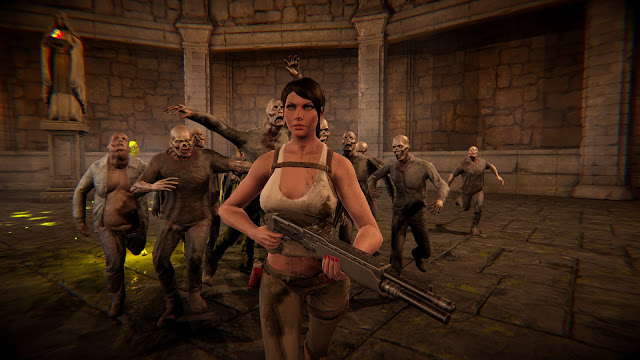 Eventually the last zombie will fall, and then you can enter a side room to upgrade your character (most of the upgrades are pointless), and purchase new equipment with the money that you get from killing zombies. This equipment includes towers and barricades, which you can use to set up a defensive perimeter against the zombies. Then you start the next wave, and some slightly more difficult zombies come charging out. Repeat until it all becomes too much and the horde finally drops your health to zero.

There’s nothing that redeems Blood Waves. Enemies are the most generic, uninspired bunch of monsters you’ve seen among zombie games, and that’s saying a lot since zombies as a whole become completely trite and overused long ago. The arena is as visually bland as they come, and that blandness hurts the play value of the game as well, as it means the level design offers absolutely no strategic interest or depth. The music is the most ear-bleedingly dull metal musac you’ve ever heard, and the controls are that unintuitive that every time I’ve tried to repair a turret that zombies have attacked (you can only do this between rounds), I’ve accidentally stated the next wave instead, leaving my turret in a decrepit state.

The things that could have made Blood Waves somewhat passable to die-hard fans of this genre aren’t there either. There’s no co-op mode, which is a grievous error for a horde mode. There’s also no leaderboards whatsoever – online or offline – making the effort to survive utterly pointless; at the point which you fall down, the only thing left to do is start a new match from start. There’s no progression from one round to the next whatsoever, and not so much of a snippet of a story. Finally, your character has absolutely no personality whatsoever. She doesn’t even have a name. However, props must to the developer for actually making the protagonist a non-sexualised woman. Games of this… quality… rarely manage that feat. 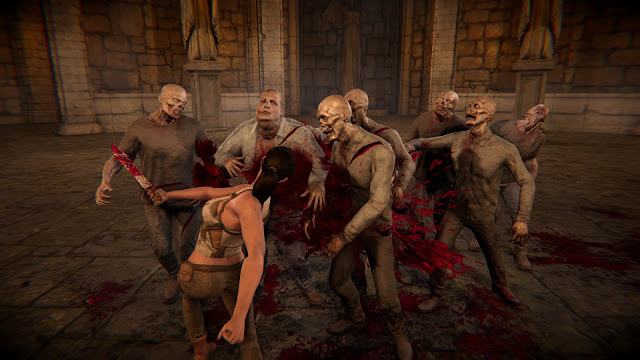 Blood Waves is the kind of trash that reflects badly on all indies. The developer has taken an established, popular genre, copied the basic elements of it wholesale, but done so in such an incompetent and soulless manner that it’s hard to see the game as anything but pure cynicism. The developer couldn’t even get its promise of being a hyper-gory game right, because while there’s a bit of bloodletting from successful attacks (or when enemies get caught in traps), there’s never a sense of carnage, because enemies just disappear after they’ve been killed, leaving the area looking pristine. Pathetic.