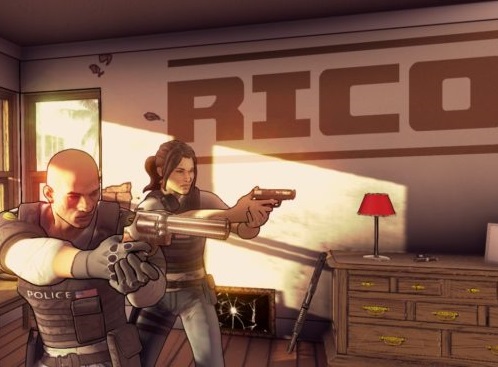 You could call Rico a kind of reverse Payday; where Payday was a co-operative shooter that let you play as the robbers, Rico is a shooter that encourages co-op play and lets you play as the cops. It’s nowhere near as well made as Payday and I can’t see it making the same splash, but it has its moments of ridiculous fun.

The big selling point to Rico is that it a roguelike in the way its levels work; when you start playing, you’re presented with a grid of levels to move through on your way to the final confrontation. Each of those levels is a randomly generated collection of rooms, with random objectives created as you play. Each level has the basic requirement to collect a couple of pieces of evidence and then escape. Failing to do that one before exiting results in the mission failing and you needing to pick a new level. Additional objectives are also generated on the fly within the level, from the completely optional “destroy mob assets” missions, through to a bomb diffuse mission that, if you fail to get rid of a certain number of bombs before a countdown hits zero, results in an instant death and game over.

Rico’s biggest problem sets in far too quickly; these randomised objectives are so limited in scope and range, that encountering them over and over again from one level to the next means that Rico runs out of surprises within the first play through. The gameplay loop is almost embarrassingly limited; you’ll come to a closed door, kick it open, and then have a couple of seconds of extreme slow-motion to take out as many enemies in the new room as possible. Once the room is cleared it’s time to complete whatever sub-mission might pop up from the handful that are available, before moving on to the next room.

Rico plays the same way from one level to the next. There’s some visual variety in the environments, from a in-progress construction area to a decadent mansion, but because there’s absolutely no narrative beyond a cut scene at the very start of the game (to the effect of “bad guys are bad and we’ve got 24 hours to kill ’em all. Get killin'”), none of these environments are anything more than superficial and arbitrary in the way they’re presented. The nature of randomisation does mean that occasionally something amusing happens, at least. For example, one time that I burst into a bathroom and found two half-naked dudes just hanging out, and instead of having to shoot them down, I almost wished there was an option for me to apologise for disturbing their chill time and back out. Most of the time, however, the procedural levels means that there’s no reason for enemies to be in the reason-less rooms, and if there’s one thing I cannot stand, it’s games that make extreme violence the core gameplay loop, and then do nothing to explain that violence. It’s senseless glorification of something that the industry really needs to move beyond, or at least learn how to use with a more critical eye.

Oddly enough, for a game that is structured around the multiplayer experience, Rico’s structure makes it rather hostile to multiplayer gaming. As I mentioned above, the core loop in Rico starts with booting down doors. And what are doorways? Something that are generally only designed for one person to pass through at a time. That moment of tension where the door bursts open, and you charge into a room putting bullets in the skulls of baddies, is therefore one that is briefly of individual action and satisfaction. Brief as that moment is (after all, the second person can follow right behind), it does mean that Rico’s co-op action does start to feel more like a case of two people going about and doing their own thing.

The roguelike approach to Rico’s levels hurts the multiplayer experience too, because none of them have been structured to encourage tactical or creative co-op play. The lack of tactical strategy to the action becomes draining after a very, very short while. Because the rooms and placement of enemies are randomised, there’s very little by way of cover options and the opportunity for stealth in Rico. But even looking at the individual player options, the developers didn’t even bother throwing in tactical options beyond a floor slide. Briefly, the balls-to-the wall, endless action loops are an amusing throw back to the FPS of yesteryear. The likes of Doom and Heretic and Quake had no patience for cover mechanics either. But then, those games had interesting level design and great monster variety. Rico has human opponents, and while they do get better equipment the deeper you get into the game, it’s hardly exciting to come up against a slightly differently dressed opponent in a FPS. 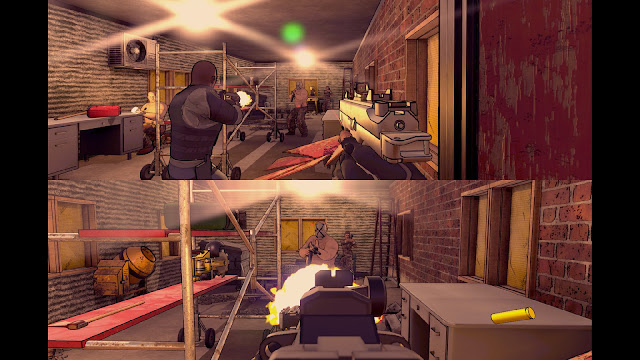 All of the above is not to suggest there isn’t any fun in Rico. It is genuinely good fun on a fundamental level. The rag doll physics aren’t too over the top, but it’s silly enough to be amusing. Guns have a satisfying kickback, and the progression system is excellent. As you complete missions you get both experience points and perk points. Experience points increase your character’s level, which gives them permanent bonuses in the game. Perk points can be spent on new weapons, upgrades, healing items and so on. Those are lost with a “game over” forcing you to start from scratch in terms of weaponry, but giving you a sense of progression nonetheless (thanks to the experience levels). Rico wisely keeps levels short enough that you’ll never spend more than a few minutes in any one, and even more wisely, the game gives you not a moment to breathe – spend even a touch too long in a level and a message will pop up “reinforcements have arrived,” and you’ll have to deal with an extra wave of pain. Forcing you to stay on your toes and move helps Rico conceal some of its issues through bombast and energy.

There’s also an overall time limit to complicate any attempted run through Rico. If you’re finding a level particularly challenging, you can retreat without completing it. But doing that means you need to try another level, and all the time, that overall time clock is ticking down. It forces you to take some risks and try and push through levels that are testing you. Given that Rico offers a good level of challenge, even on the lowest difficulty setting, that pressure is another clever way of keeping you pressing forward and taking risks, heightening the tension and excitement beyond what the raw gameplay would otherwise offer.

Rico is too limited to reward sustained play, but in short bursts, whether you’re playing in single player or co-op, it can be a blast. I do feel like developers are far too ready to jump to procedural generation to provide them with an excuse not to bother with level design, and Rico is a perfect example of this. Having “unlimited replay value” means nothing when it results in such a grind, and I can’t help but think that Rico would have been so much better if it was over and done in a couple of hours, but that bombastic action really had a chance to fly thanks to carefully designed levels arranged to help boost that experience.