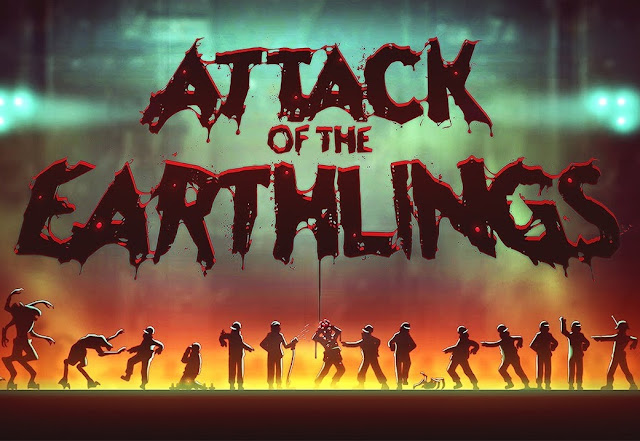 Remember the scene from the original Alien film where the Xenomorph is moving around the spaceship’s vents, hunting down the few remaining survivors in a tense game of cat and mouse? Well, Attack of the Earthlings is a tactics game where you’re in the shoes of the alien – and it’s also somehow a comedy. Developed by Scottish studio Team Junkfish, this game sees you in the shoes of a disgruntled alien Matriarch, understandably upset that humans have stuck a giant resource drill into her planet. What follows is a stealthy journey up the drill, killing soldiers, scientists and pitiable labourers along the way.

The biggest standout for me is actually the visual design. Maps are modelled lovingly in 3D and each level has its own visual aesthetic. There are tons of gags baked right into the environmental design, and the little details really sell the atmosphere of an evil mining conglomerate and their various business departments. This is a game which boasts large, sprawling levels ripe for exploration, and it’s enjoyable to experience this space and devise a plan to sneak around unnoticed.

The other high point is the humour, which tends to lean into caricature territory – rather than making any commentary on the nature of big business or mining operations, the writers portray the executives as comically evil: less “funny because it’s true” and more “funny because it’s absurd”. But what I really admire is the diversity and depth of the jokes on offer – scenes effortlessly mix up farce with dark humour, and Kafka-esque misfortune with slapstick. The developers have clearly intended to make a comedic game from square one, rather than deciding to slot in some jokes as an afterthought. The mechanics, narrative, animations and level scenarios are all at some point used as a tool to get a laugh. Even though I wouldn’t say that humour is the game’s primary goal, it still managed to make me chuckle more than a few times per level – and that’s not something I can say about many games that purport to be funny. 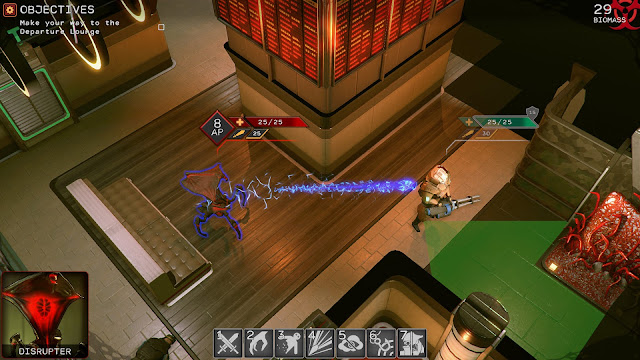 When you think of turn-based strategies, you tend to think of 200+ hour slogs with epic scale, but Attack of the Earthlings keeps things grounded on the simple side. Each level starts with players controlling an alien Matriarch, who has the ability to create additional units by consuming biomass or taking over workers. The restriction on biomass thankfully allows the player to dictate just how much complexity they’re willing to tolerate – you’ll never be handed two dozen units and forced to figure out how to use them effectively – and the result is a turn-based strategy which is more accessible than most. You can probably finish the main story of this one in the time it would take a Fire Emblem or XCOM to really get going.

Attack of the Earthlings’ levels are designed in clever ways and segmented into manageable chunks. You’ll usually be faced with zipping between a few rooms separated by doors or vents, hiding out of the enemy’s sight until you’re able to get the jump on them. Your units tend to be weak and vulnerable to enemies with weapons, but you’ll also have a variety of special moves in your arsenal to stay unseen and to make your strikes decisive. You’re allowed to save whenever you like but unfortunately there’s no checkpoint system: if you’ve made a terrible mistake you’ll need to do some resetting. The game’s not terribly difficult but I did have my frustrations with the fog-of-war system, in which squares you’re far away from are lightly shadowed – but since most characters can move twice the radius of the fog in one turn, you might accidentally walk your units into enemy fire on some occasions.

My main gripe with the levels is that most feel like they have an “intended path” rather than allowing the player to fully flex their strategic thinking. While the game does offer branching paths on perks they can unlock, the civilian and enemy placements feel predictable and often you’ll easily figure out what the game wants you to do. Ultimately, I found it forgivable, since the gameplay is largely in service to making the player feel like they’re the antagonist of a sci-fi horror film, taking out people when they are defenceless and sneaking back into the shadows. Each level has a par amount of turns which rewards efficient players. Aside from this though, there’s just not a whole lot of incentive to replay any of the stages however – even if you re-spec your skill tree, you’ll largely be doing the same things. 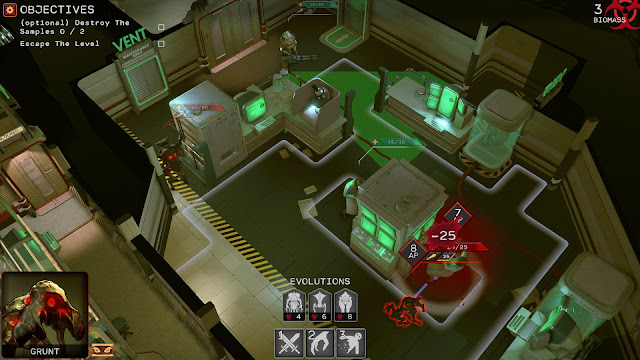 Most of the coverage of Attack of the Earthlings have mentioned its short length and limited replay value as a problem, but I’d like to offer a counterpoint. If a game is shorter nowadays, I tend not to think about value for money, and instead I’ll turn my attention to whether the game is making the most of its abbreviated runtime. Attack of the Earthlings is a game which passes this test with flying colours – it’s full of jokes and whimsical situations, squeezing in as much narrative as possible into its sequence of levels. If lastability and replay value are the sacrifices needed for tight and innovative design, then Attack of the Earthlings signals a welcome change in a saturated genre. I for one welcome our new insect overlords.