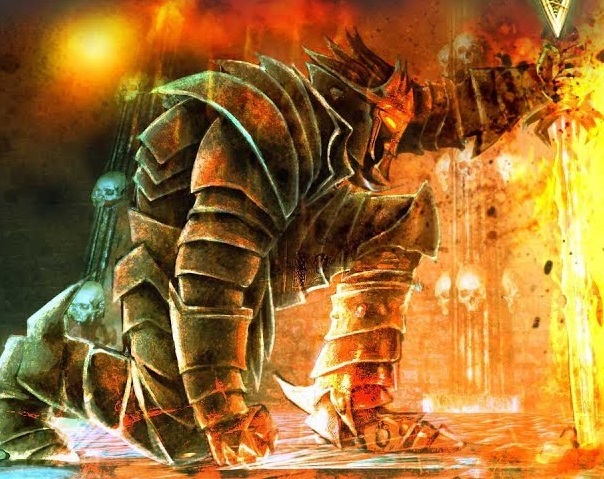 You’d never know this today, but I used to be a big fan of the FPS. Back when the genre represented the finest transgressive energy in the games industry, and when the limited hardware on offer meant that developers aimed for the fantastic and abstract, rather than military realism, I would play and replay the likes of Heretic, Hexen, Doom and Quake.

That heritage of the classic shooter has been kept alive with a few properties – Painkiller and Serious Sam being two of the most noteworthy. These are generally good fun; limited in scope compared to the “AAA” of shooters, but limited in the right way. Then there’s the B-tier. Apocryph is most certainly the B-tier.

Modelled more after Heretic or Hexen, Apocryph presents players with a grim, dark fantasy world of the risen dead, gothic demons, crumbling crypts and other locations of horror. You start up with nothing but spiked gauntlets, but it’s not long before you build up an arsenal of ranged weapons, each of which uses a different kind of ammunition. The developers have absolutely nailed the aesthetic of retro shooters, with item pickups floating above the ground, right through to the way that enemies charge directly at you with no AI whatsoever. Right from the opening moments Apocryph looks and feels just like a lost and recently re-discovered game of yesteryear.

Well, this game certainly tries hard to be Hexen. For good and ill #NintendoSwitch pic.twitter.com/7IiVS5mUbk

This philosophy follows through to the level design, which is traditional to a fault. Apocryph just loves throwing key hunting “puzzles” at you, as much as it loves having hidden walls full of enemies drop down behind you at the most inopportune moments. Environments tend to be limited in width, and it’s quite easy to get lost in them, because the labyrinthine design often lacks for markers to help push you forward. There’s also terrible signposting of secret areas – you’ll be told at the end of the level how many secret areas you missed, but unless you’re willing to methodically scour every pixel of a level, the game gives you no hints on where you might find them.

In the moment-to-moment play, Apocryph is again traditional to a fault. Boss battles are unpleasant in how cheap they can be, and feedback in combat is limited – you’ll have no idea how effective a weapon is until the enemy falls over dead. Enemy hordes are large, and the most common tactic you’ll be using is to retreat as far as possible, firing at enemies to slowly whittle down the numbers. With no automatic healing, levels are a matter of surviving a war of attrition, and that makes enemies that have ranged attacks especially dangerous, as they can get a quick blow in here and there, which can really build up over the course of a level. Unfortunately the aiming mechanisms in Apocryph are clumsy, making it difficult to take down those ranged enemies.

It’s also worth noting that Apocryph is thin in terms of material. It’s over in a couple of hours. I laud the developers for both respecting the player’s time and not trying to pad the game out, because the last thing Apocryph needed was to become a grind, but with no multiplayer or additional challenge mode those people who care about content at the expense of quality will find Apocryph over far too quickly. Finally, to round out my litany of criticisms of Apocryph, the music is terrible. Half the time it’s trying to be fantasy atmospheric, but is not paired with the environments at all, and then, for the big action scenes, it’ll pick up pace to become something hard rocking. The rock music, too, is traditional for the genre, but the transitions between these are odd, to say the least (I think the hard rock kick-in is related to the number of enemies on-screen), and it drops away just as jarringly. For a game that’s aiming to be as atmospheric and moody as Apocryph is, this is a big misstep. 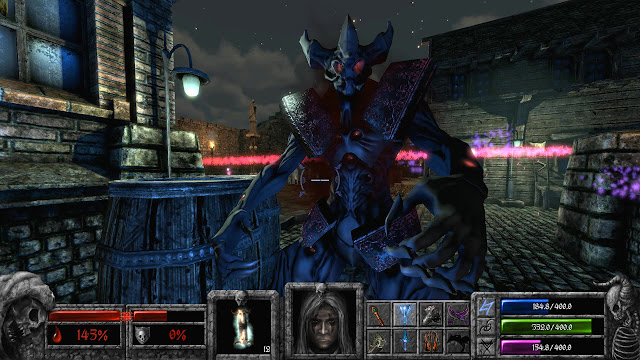 With all of that being said, Apocryph does achieve its goal. Unlike some of the other “retro themed” shooters, such as Serious Sam or Painkiller, the developers clearly didn’t want to even attempt to modernise the gameplay. As with any “retro” genre or approach to game design, the classic shooter has issues that the industry has left behind for good reason, but in the name of authenticity the developer of Apocryph wanted to maintain those warts. For someone like me, that’s actually a good thing, as it gives me a brief, nostalgic trip. Those who go in unwilling to leave their modern expectations of what constitutes a “good game” behind are going to be disappointed, however.

It’s been quite the period for shooters on the Switch, with the port of Turok the Dinosaur Hunter and the modern buddy-cop shooter, Rico, all releasing along with Apocryph over the last couple of weeks. Apocryph’s stylish commitment to the classic shooter genre tradition, and its dark fantasy vibe, make it the most distinctive and appealing of these games. That design also lets the game down when it comes to delivering a satisfying shooter, but people who can still pick up Heretic or Hexen and enjoy them for what they are will also be able to get a couple of hours of frantic fun out of Apocryph.

Review: A Ghost of a Tale (Sony PlayStation 4)