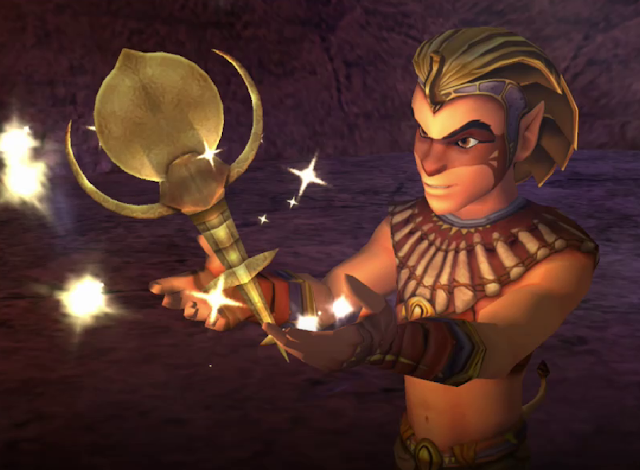 Sphinx: Curse of the Mummy is an action platformer released back in 2003-2004, depending on region, that had a remastered version made in 2017 for PC. Curiously, the remastered version didn’t see any console releases until now, getting a port to the Switch. It comes to us via THQ Nordic, a publisher I have an overall favorable opinion of, though it has such a range that some of its titles haven’t been quite my cup of tea. I say that, rather than it being a case of “hit or miss,” because they’re one of those rare publishers with a broad portfolio, both in genre and overall atmosphere, from cartoony to dark, and from RPGs to racing games to action platformers to even a singing game.

I was particularly interested in this title because I’d never played the original, let alone known of its existence. It kind of slid under the rug, though in fairness I wasn’t big on this genre of game when it was originally released, probably distracted by an RPG. I’d not heard of the remastered version either, and I’m willing to bet I’m not alone there. I’m glad to see games getting exposure on the Switch, and in Sphinx’s case, nearly two decades from its original release, I was eager to see whether it stood the test of time. Going into this relatively blind (armed only with the knowledge of its age and the genre), I was very excited to find the answer to this question.

But after playing it for a while, this wasn’t my first question. In fact, I called its bluff – the “remaster” had to have been more than a simple fix-’er-upper and port. These graphics are a bit too good, I thought. Not just that they’re HD, that’s to be expected, but the characters themselves are highly emotive, reminding me positively of the Fable series. I looked up gameplay footage of the original release for comparison, thinking surely this was part of the remaster, but to my surprise, it wasn’t. Turns out the “remastering” of the game was mostly to update it to HD and fix some bugs, but the overall quality was already present. It wasn’t bluffing after all. 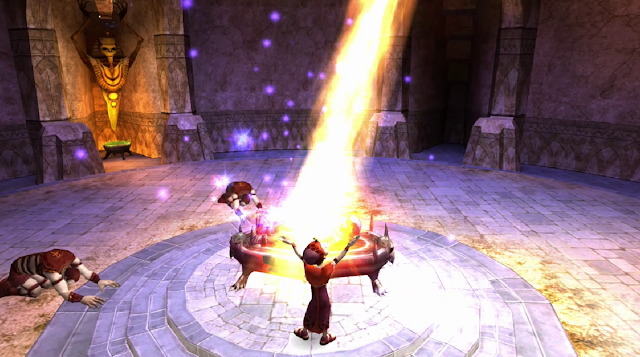 Granted, if put under the microscope, the rings in the trunk become apparent. You’ll notice off the bat that character shadows are practically non-existent. You might notice some low-poly pieces of character models, but shading smooths them out nicely to cover the blemishes. You might notice that many textures are pretty low-res, but they’re still surprisingly detailed, if blurry. You might notice the occasional seaming issue, and if you’re trying super hard to find something wrong graphically, you might catch some animation transition inconsistencies… but that’s about it. Its overall presentation is pleasing to both eye and ear, with a well-composed orchestrated soundtrack to boot.

If I were to call foul somewhere, though, it would be directed at the pacing. Even for its time I would think it a bit slow. We take for granted how snappy modern games are, but I had to bear this in mind chugging along through Sphinx. Still, there seems to be an awkward pause before and after interactions that make it sluggish. Even if these slow animations were sped up, certain repetitive gameplay elements like pulling levers, watching animations again, picking up and moving stuff around, hunting for things, and at some points a lack of clear direction, it can get tedious. Without a clear reward in sight either, this tedium can evolve into boredom. I caught myself thinking “all right, fine, I’ll go pull another lever, can we move it along after this?” and other inner monologues of impatience. You’re rewarded with new scenery or something else that’s fresh around nearly every corner, sure, but it does take its time getting the ball rolling.

Still, the game was actually a masterpiece for its time, and I’m excited to experience this gem. While I was initially put off a little bit by the feel of the platforming itself, it’s something you get used to. What surprised me is just how diverse it is, and the more I played, the more I felt something very familiar about the whole experience. The exploration, story, combat, progress gating via power-ups and puzzles, it has many elements of classics like Zelda and Metroid. While this is no Breath of the Wild, it’s no slouch in touching the key elements that make those games classics. In particular, you’ll constantly be running into things like locked doors, chests, in-sight-but-out-of-reach stuff that you’ll log in the back of your mind to return to later. It’s a narrow design masquerading – quite well – as an open-ended one. 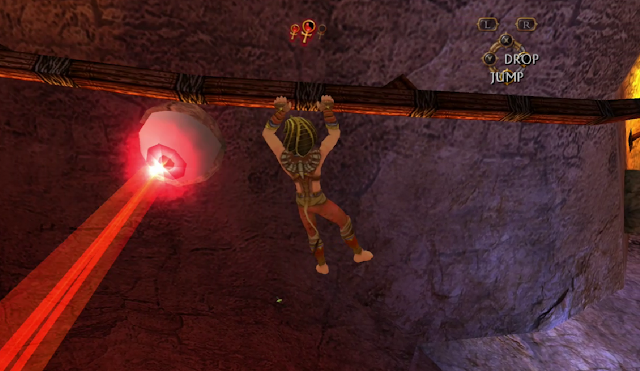 Sphinx has aged relatively well. This is the perfect way to introduce newcomers to the game, even if it’s a series that didn’t take off. To borrow a turn of phrase from a certain someone on a certain podcast, the game has archival and historical value to back up its good gameplay. I admit I wouldn’t have picked this up at face value, though, and may not have continued on were it not for the promise of “it gets good.” The relatively slow pacing and somewhat wonky camera might be a turn-off, but I would still recommend experiencing this game if it slipped under your radar, as it did mine.