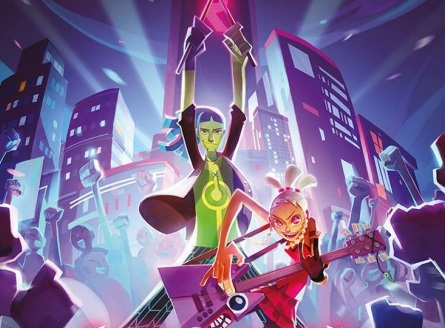 A team of veterans from various Final Fantasy projects have come together to form a new studio, Metronomik. The studio’s founder, Wan Hazmer, previously the lead game designer on Final Fantasy XV, has published a video with substantial details about the new studio’s first game, No Straight Roads… and it sounds awesome.

No Straight Roads is an action game, with all the standard platforming and combat elements that you would expect from such a game. The game’s point of difference is how important music is to the experience.

It’s not a rhythm game, but music infuses every element of the gameplay, from determining the timing with which bombs land on the screen in one section, to being the basis of your weapons, and on to the ability to change the world by transitioning between different styles of music.
Coupled with a distinctive and interesting visual art style, No Straight Roads looks vibrant and abstract. If music infuses the gameplay experience to the extent promised, than it will feel great to play – there’s nothing quite like the feeling of actions to rhythm – fingers crossed this game can succeed in pulling players into a dance-like trance as they play.

No Straight Roads is currently slated for a “spring 2019” release window (autumn for those of us in the southern hemisphere).