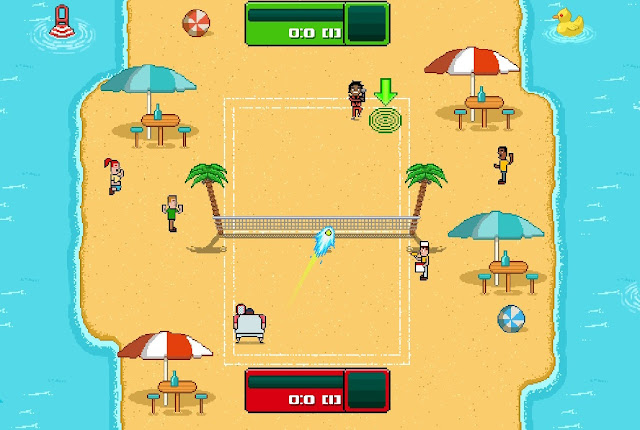 When you boil a tennis video game down to its most basic components, you get Pong. One of the very first video games ever made was, effectively, a simulation of bouncing a ball back and forth across a court, with the goal being to get that ball past your opponent. So, basically, tennis.

Now, of course, decent tennis games over the last few years have taken some significant steps beyond pong to introduce the tactics, skill, and physical strain that tennis places on the body. Court positioning and tactics even come into the arcade-like tennis games, such as the Mario Tennis titles. And then there’s Timber Tennis Versus… a game that genuinely struggles to stand out from Pong, first released in 1972, because at least Pong isn’t so ridiculously dedicated to wasting the player’s time in between points.

In Timber Tennis Versus, the start of each point is decent enough. To serve, you do get to select the direction that you want to hit the ball. From that point on, though, the game loses any semblance of the tactics or depth of tennis. From that point on, your only goal is to make sure your player is standing in the path of the ball when it comes to your side of the court, just like you do in Pong. 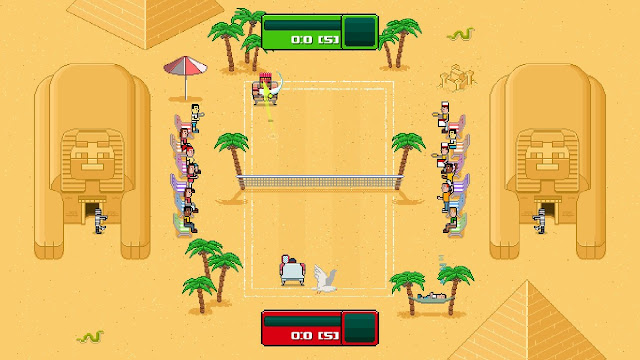 Courts (of which there is a huge variety, and some are very amusing, though they all play the same) are split up into five vertical rows, and your character simply jumps from row to row with a press of a button. If you’re in the path of the ball when it arrives, you’ll hit it back. There’s perhaps an element of timing involved to help decide on direction, but it’s subtle, and there’s certainly no way to manually control direction, power, or even the character’s swing. If the ball gets past either your opponent or yourself, it’s point over. After a number of points (in career, it’s first to five, but in casual matches, it can be between one and eight) the match is decided. And that’s it. That’s all there is to Timber Tennis Versus.

In itself, this wouldn’t necessarily be a bad thing. For short bursts of multiplayer fun, especially, Timber Tennis Versus has everything it needs to be a forgettable, but enjoyable game to enjoy over beers and at parties. Unfortunately, the developers have absolutely destroyed the rhythm of the game, to the point where you spend more time waiting for stuff to happen than actually playing the game. That, sadly, ruins any party game momentum it might have otherwise had.

Here’s the routine: First the players enter the court (yes, with every point). Then there’s a countdown – 3… 2… 1…. Then the point is played. After someone wins, there’s a little victory animation and the score is shown on screen, before the cycle starts again. Unless a point lasts for 10 or more shots (by no means a guarantee), you actually spend more time watching victory animations and countdowns than you do playing, and this does become aggravating after a few matches. Arcade games should be all about drop-in and mash buttons, and the entire experience should be crafted around people playing as quickly as possible, and for as long as possible. Particularly when they’re this simple. Wasting players time with stuff that could almost all be cut out without impacting on the gameplay leaves the impression that the developers don’t realise the limitations of their game and are assuming that people will be more invested in the experience than they will be. 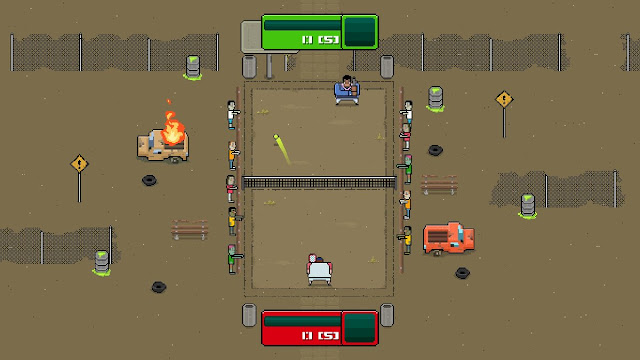 In an attempt to break up the basic Pong-play, Timber Tennis Versus also includes some powerups, which drop at random into the play field. They are the kind of standard stuff that you’d expect – temporary size gain, making it harder to hit the ball past the player, or an ice block that freezes the opponent in place momentarily. Unfortunately, because the base gameplay is not tactical, the powerups feel very arbitrary, and don’t achieve much; as soon as you receive them, you’ll activate them, and if they help you win a point, so much the better, but in reality most of them don’t do that much at all. In fact, I tended to lose more points in trying to race over to the other side of the court to pick up an item (thus making it impossible to get back to hit the ball), out of a habit honed from decades of playing games. When I see a powerup, I feel an obligation to pick it up. In Timber Tennis, the reward for doing so is rarely there.

In terms of features Timber Tennis Versus is impressive, particularly at its price point. There’s a “tournament” mode (a series of matches against escalating AI difficulty), and a single match offering in single player, and there’s local multiplayer for those times you’re in the mood to play Pong with someone else. The feather in the cap is online multiplayer, which is cross platform to boot. Sadly, I haven’t been able to get a match going – not from connection issues, but rather that it seems that the game has a rather limited online community. That’s not surprising, given how little skill is actually involved in playing – it’s not the kind of game that people will care enough for to inspire them to work through the world rankings.

Timber Tennis Versus has a nice pixel aesthetic, and for $Aus3, it’s hard to fault the developers for the effort that has gone into making the package as comprehensive as possible. It’s a substantial step up from Timberman Vs, too, because, shallow as it is, there is at least more to do than mash a single button. It’s by no means an essential game, but it’s passable for (very) short bursts of play.