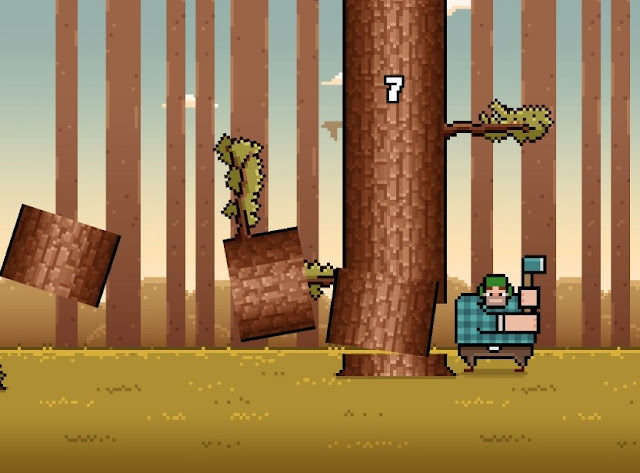 The Nintendo Switch doesn’t need games like this in its library. An “enhanced” port of a PC port of an iOS game, Timberman is shallow, limited, pointless “entertainment”, with a ridiculous grind thrown in that tries to stretch the ten minutes of “fun” that you’ll get from it into something that will last hours upon hours.

Related reading: If you’re looking for a really cheap game on your Switch, then No Thing is absolutely the way to go. We write about the game in this piece.

The game is as simple as this: you’re chopping down a tree. With each swing of the axe, a section of the tree is knocked out, lowering the tree down one “step.” There are two sides you can chop from, and there are branches that descend with the tree that will kill you if they hit you. So your goal is to jump from side to side on the tree, chopping it down methodically, while avoiding the branches. And you have to do all of this quickly, because there’s a ticking down timer that will also kill you if it bottoms out.

Because you’re rushing to chop so quickly, it’s easy to make a mistake and crash into a branch. Timberman Vs. comes from that same school of design as Flappy Bird and its ilk; frustrate the player to the point where they absolutely have to try and beat that last score. The problem that Timberman faces is that it’s relatively easy to end up with a good score. Flappy Bird’s odd brilliance comes from the fact it’s hard enough that actually getting a good score is a challenge. In Timberman you’ll be getting scores in the hundreds with very little practice, and that means that starting out each play through is an ordeal, in that you know you’ll have to commit some genuine time to the game to try and beat your previous top score. In a game like this, any disincentive whatsoever to play “one more time” is catastrophic to the game’s replay value. 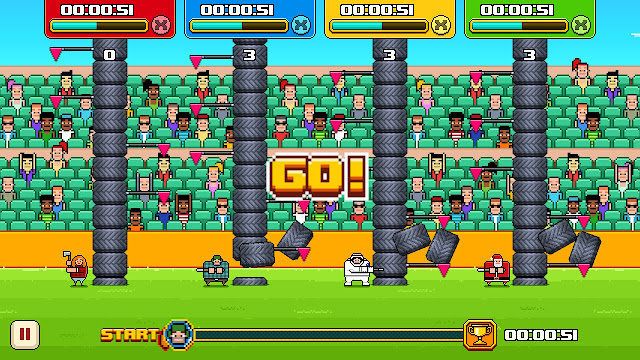 The game doesn’t help itself with an absence of online leaderboards, either. I know this is an indie development project and servers are a pain to set up and maintain, but if you’re resting the value of your game on a score attack, that online leaderboard is something the developer should have seen as mandatory. There are a couple of different ways to play, but none of them add longevity to Timberman; there’s the standard endless mode, a “hero mode” where you need to cut down a tree of a specific size in order to win a “prize” (more on prizes in a moment), and then there’s a multiplayer mode in which you all compete to cut down a tree of a certain height the fastest, with the ability to use a super power to rush through the tree if you cut fast enough, long enough. In multiplayer branches only stun, rather than kill, and the action can be frenetic enough, but if anyone plays this for more than three or four rounds in a row (amounting to around five minutes of gameplay in total), I’ll be amazed. It’s about as deep, as multiplayer games go, as one of those carnival competitive games for the stuffed bear prizes.

Those stuffed bears are at least a reward for handing over your money to the carnies, though. In Timberman, all you earn is experience points, and with each new “level” you unlock a new character to play as. These characters have no difference in ability from one to the other, and it’s purely a cosmetic choice, but they also lack any kind of personality and in the heat of the game you’re not going to notice them anyway. Worse, though, is the grind. After the first half dozen or so experience levels, the rate in which you unlock stuff slows to such a complete crawl that the only way to feel like you’re making any progress is to play the “hero mode” over and over again, because the “prize” at the end is a big pile of experience points. But if you play that mode, you’re no longer chasing high scores, which is meant to be the point of the whole thing.

Timberman Vs is such a confused and poorly thought out game, I wouldn’t recommend it if it was free (and it is free on the iPhone anyway). The inclusion of a multiplayer mode that could only possibly be the briefest of distractions for anyone looking for a party game, on a console that already has dozens of brilliant multiplayer experiences, neither justifies the game’s increased price point nor, more importantly, the time that it demands of you to play in the first place.