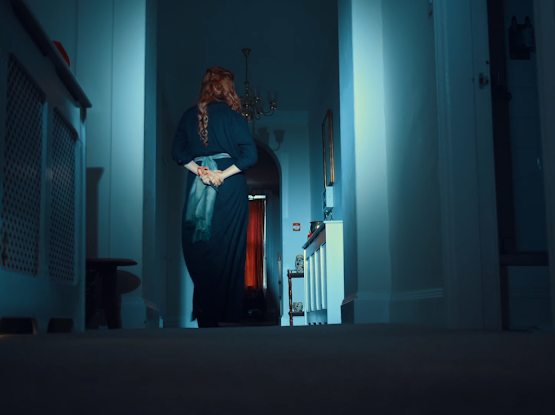 A young woman is dead. Strangled in her own home. A trio of tarot readers predicted it — but does that mean they were directly involved in the murder? It seems like a tale you’d find in a classic murder mystery film. That actually accurately describes The Shapeshifting Detective as well. “But Lindsay”, I bet you’re wondering, “The Shapeshifting Detective is a video game. You review video games. How can it be described as a film?”

I do review games, and this is a game review. But The Shapeshifting Detective falls into the FMV genre; a genre that has a rather sad past but based on this last year alone, it has a bright future. FMV games such as this one use live video instead of computer-modelled characters to share the narrative. This title, as with D’Avekki’s first, The Infectious Madness of Doctor Dekker, resembles having a series of conversations. Unlike Doctor Dekker, The Shapeshifting Detective also moves between locations, creating a remarkably more immersive feel.

Related Reading: Since I ramble about it enough, check out my review for Doctor Dekker here!

The player becomes Sam, a man with a mysterious history who is sent to the seaside town of August to help the police solve the murder of a young musician. Dorota Shaw was a talented cellist, accepted into a prestigious university. But she’ll never make it there, as her parents return home one evening to find their daughter on her bed, strangled to death. 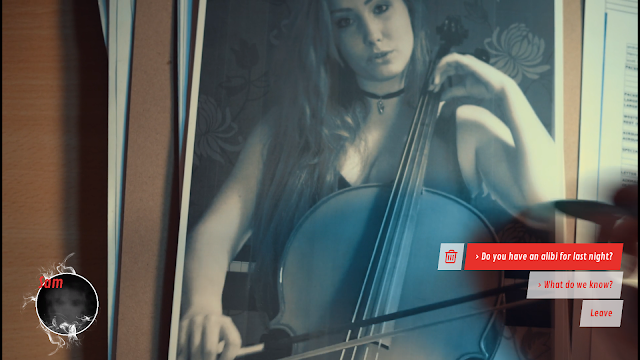 As if the mystery isn’t perplexing enough — it seems as though absolutely everybody loved Dorota — there is this group of tarot readers, who show up just in time to predict the murder but cannot prevent it. Bronwyn appears to be the leader of the tarot readers, assuming everyone is out to get them (although she’s not necessarily wrong). Rayne is intense and secretive. Lexie is bubbly, flirtatious, and completely incapable of keeping a secret. The tarot readers aren’t the only suspects, as the town of August is apparently filled to the brim with suspicious folk who lack credible alibis.

As Sam, you travel from room to room, location to location, to speak with people. The bulk of the game occurs in the Guesthouse, run by Violet. Violet is played by my favourite leading lady, Aislinn De’ath. This is where the tarot cards are staying, as well as Sam himself. You chat with each character in their respective rooms. Alternatively, you can take a cab out of the Guesthouse to visit the chief of police and a handful of other interesting people. There are times getting into the cab triggers the next chapter to begin; you can always continue to investigate before moving forward, but you will have to listen to a long radio news story again to do so. The cab/advancement system is a bit flawed and frustrating to navigate, especially while sitting through something multiple times.

Sam has a secret, though. I suppose I forgot to mention that important part. He is a shapeshifting detective, after all. Once he meets someone, he can return to his room and transform into them. The best bits of story come from shapeshifting into someone and meddling in their personal relationships. It won’t affect the outcome of the game (the killer is randomly chosen when you start) but it’s completely addictive to uncover all of August’s best secrets.

The characters act differently depending on who they believe to be speaking to. Violet becomes less flirty and more stern when speaking with the tarot readers. Photographer Zak is very obvious about who he likes, either showing complete disdain or overt flirtiness. And as Sam is transformed into someone else, their voice will speak as you ask questions. There’s an icon in the bottom right corner stating who you are, because it’s quite easy to forget.

You can fly through the story in a couple of hours, or really take the time to dig around and replay and far more from it. Once you’ve completed one or two run-throughs on your own, it may be worth it to take a glance as the trophy (or achievements depending on console) list to guide you to moments you may have missed. And by “may be worth it”, I mean it absolutely is. I’m three times done and still going back for more.

The mysteries contained within The Shapeshifting Detective stem from contemporary mystical practices. Believe it or not, there is more to the world than what we can see with our eyes, and the game explores a couple aspects of the unknown. 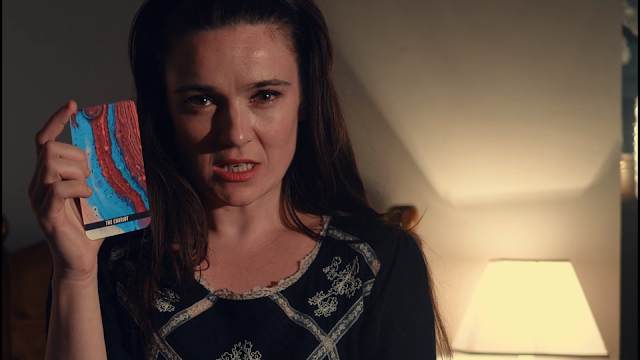 The origin of tarot cards remains difficult to trace, and perhaps that is why there are so many skeptics. Maybe it’s a fear of the unknown. Or maybe it’s because there is a social belief that tarot readers are psychic frauds. I’m not saying criminals who use tarot as a tool don’t exist — but I am saying it’s absolutely not the norm. Tarot cards are essentially a way to guide you through life by listening to your subconscious mind. I won’t bore you with details, but Lynda Cowles, the co-creator of The Shapeshifting Detective, pointed me to Learn Tarot for further reading and if you’re interested I’d recommend the same.

The Shapeshifting Detective’s narrative plays up the fear of the unknown relating to the tarot. Obviously, if you go to the police correctly predicting a murder, you’re going to be a suspect. But the tarot readers are also considered suspects because they’re perceived as weird and new. Interestingly enough, this hits my deepest fear head-on: I constantly worry that anyone I interact with won’t like me because I’m weird, that I’ll be labelled and ostracised. Like the tarot readers. Ouch.

Aside from the shapeshifting, the main element of actual supernatural forces is the Ouija Board used by Lexie to learn specific names. Her reasoning behind how spirits can predict the future is absolutely fascinating and utterly believable, which is why I feel the need to warn anyone tempted to use a Ouija Board. It may be sold grouped with board games, but it is not a game. Using one without proper understanding of what is about to happen —and without protection — opens you up to things you may not want in your life… and that may not leave. 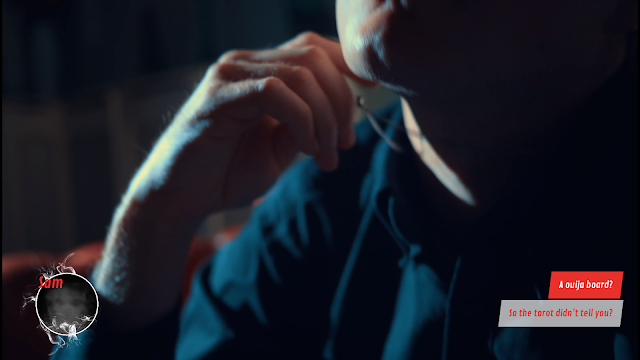 See why I assume people think I’m weird? I share most of the beliefs of the tarot readers, and I struggle to tell if that’s reassuring or almost mocking. I try think it’s former, though.

I’d like to take a moment to talk music. The background music is lovely and haunting, but the radio is practically a star in its own right in The Shapeshifting Detective. One, each is “Dekker” branded, a lovely nod to Doctor Dekker. Most importantly, the radio in the Guesthouse serves up short story after short story of old-school radio greatness. It really is a treat.

The Shapeshifting Detective is proof that FMV titles can be done extremely well. The team at D’Avekki show true respect to the genre. I’d like to extend my personal gratitude to developers for their faith in FMV games. It is all about the narrative — not about pressing all the buttons really fast. The characters are extremely relatable, their relationships complicated and addictive. There are mysteries far beyond what I can write about without ruining it for a future player. Whether you’ve ventured into the genre before or not, The Shapeshifting Detective deserves a spot on anyone’s must-play list.