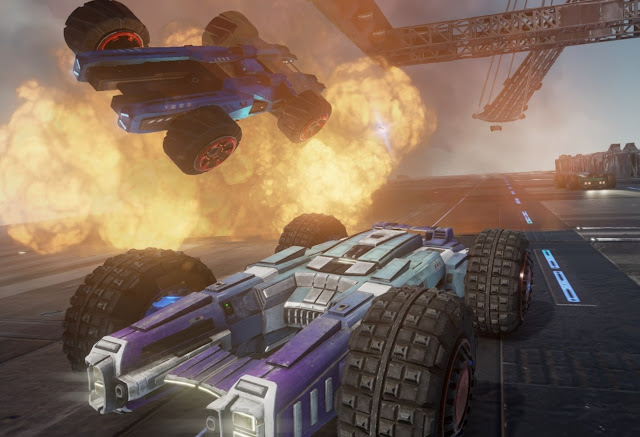 The latest futuristic racing game to release is GRIP: Combat Racing, a Rollcage-inspired title that features gravity defying open-wheeled vehicles that can drive on any surface. From walls to ceilings, if it looks like the player can drive on it then it’s a possible path through the map. It’s an impressive looking gimmick, and the developer Caged Element did a great job at making the transition always seem natural rather than disorienting and dizzying.

As far as the actual racing goes, GRIP isn’t reinventing the genre. Players still compete in lap-based races, they have a nitrous boost that they can use to gain a temporary edge (it refills over time), and there are speed boosts and weapon pickups scattered around every stage. It’s very much in the vein of a more “realistic” Mario Kart (although the weapons are far more balanced as you won’t find a blue shell here).

However, by sticking to what works, GRIP is able to highlight the few differences it does bring to the table. Being able to take alternate routes by flipping towards the ceiling is a cool mechanic, and one that immediately captured my attention. Sometimes more boost pads would be on a ceiling or vice-versa, so it’s important for players to pay attention to how the track is laid out in order to plan an optimal racing line. It’s a small thing, and something that could be dismissed as gimmicky before you play it, but it really does make an impact.

That initial learning curve provides many of the racing game’s finest moments. Getting to learn each track is highly satisfying, and discovering little shortcuts in each track can make the player temporarily feel like a genius. There’s a great sense of discovery here, and that extends to just getting to experience the futuristic world, as players race on everything from desert planets to more standard industrialized sections. GRIP is a gorgeous game to look at, and its art design is a highlight.

This fresh gameplay is the saving grace for the campaign mode, which is comprised entirely of bland menus. There are over ten tiers of different tournaments to compete in, but it’s far from a captivating experience. With the mode not having any sort of further structure, I never felt compelled to continue progressing through the mode, I just did so because it was the only real single-player offering available.

There is a nice ramp up to both the difficulty and style of the events similar to how campaigns are handled in WipeOut. At first, weapons are disabled and players can focus purely on racing, but eventually they find themselves trying to blow up competitors and getting into elimination races. However, I never found the combat to be quite as satisfying in GRIP as compared to Sony’s futuristic racing series. There’s a solid mix of defensive and offensive pick-ups, but it just never clicked for me. I just wanted to race rather than get into deathmatches. 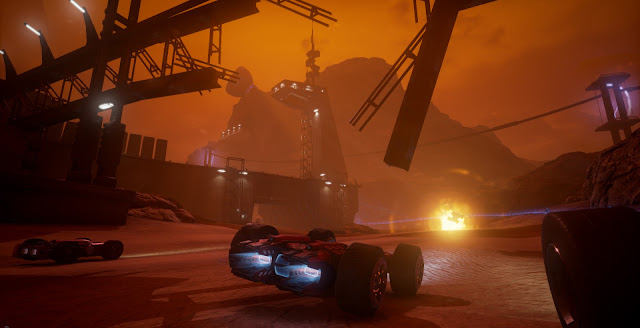 As far as multiplayer goes, GRIP is a pretty robust experience. There are four separate race types (ranging from pure racing to ones geared toward combat), and there are several arena offerings such as a team-based mode where players try to steal loot from the other team’s base, and one featuring a time-based bomb. Both are worthwhile diversions, but the racing is the star here, not the combat. In addition to online play, there’s also split-screen local play, which is a nice addition and faithful to the genre’s roots.

The most disappointing mode winds up being GRIP’s “Carkour” offering. It’s essentially the developer’s own take on Trials and TrackMania, as players have to drive around some crazy courses in order to collect a gem. The best of these are fantastically fun tracks that have the player jumping gaps and performing gravity defying flips in order to get to the finish line. However, it’s a lot of wasted potential as there are less than 20 events and there’s no incentive given to the player to go back and replay them. Rather than being an actual third key component to the game, it becomes a neat oddity that lasts a half-hour and then is never thought of again. It needed to be fleshed out as it’s one of the biggest differentiators between itself and other combat racing titles on the market.

GRIP is an enjoyable racing game that is constantly hampered by bare-bones presentation. The core driving is a lot of fun, but when races and battles aren’t presented in a fun manner then it relies on the gameplay to be constantly engaging. The gravity mechanics are certainly cool to see, but they aren’t exactly innovative or game changing enough to overcome the shortcomings after the initial allure wears off.