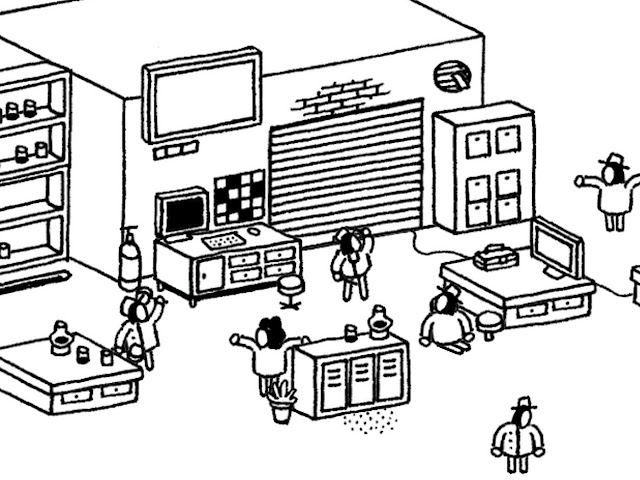 As a kid I loved the Where’s Wally find’em books (Where’s Waldo in other parts of the world). It wasn’t just the challenge of trying to find Wally or the other specific points of interest that the book challenged you with finding across each of its richly colourful double page spreads. It was also in simply absorbing the manic vision that meant that every part of the image was packed with rich humour and energy. Martin Handford is a genuine genius for the way he has been able to create such lively spaces, and it’s very easy to imagine the complete chaos of the worlds he draws in motion.

Hidden Folks is clearly inspired by Where’s Wally, and as a video game, it even had the opportunity to add animation and movement to articulate that same chaos. The result of that effort is good fun in its own right, but nowhere near the vision of its source.

In Hidden Folks you need to find a number of specific people and items within environments that are often mammoth in scope – much bigger than the Nintendo Switch’s screen. So you’ll need to zoom right in and then pan around those environments, studying them carefully, while using the clues attached to each target character to help you figure out exactly where in the giant image to look. 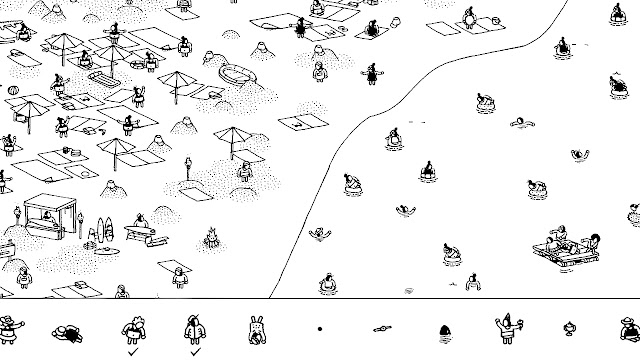 One thing that Hidden Folks adds to the mix, that is impossible with printed paper, is interactivity. Sometimes you’ll need to clear away bushes, open tents, and move things around in order to find the hidden character underneath. Of course, not every bit of the environment that you can interact with hides something important, so you’ll be spending a lot of time tapping on things hoping that you get lucky. It’s a neat trick, but a little wasted. Those interactive elements that aren’t hiding some of the key objects that you’re tasked with finding aren’t generally holding anything of interest at all. It was an opportunity for the developers to add humorous animations and other such fun, but instead, for the most part if feels like wasted energy to click at all.

For the most part, the objects that you’re tasked with finding are distinctive and amusing, in the same spirit that Where’s Wally is. It’s good fun to try and track down the old shaman hiding within a waterfall, for example, but one of the game’s big issues is that it also asks you to track down pointlessly mundane nonsense just for the sake of giving you a challenge. A nest a bird eggs in a forest? A specific chick in the context of a farm scene? A rotting fish? Sure, these things are objectively challenging to spot at a glance, and force you to really pay attention to the scene, but they don’t add much to the scene’s tone, either.

Meanwhile, I’m torn on the aesthetic. On the one hand, I love the black-and-white ink drawing look. On the other hand, the deliberately amateur approach strips a lot of the personality out of the scenes. A lot of characters and situations that should be silly and funny come across as flat instead, and that’s a pity, because Hidden Folk’s environments have a lot of potential, and are certainly packed. I just never felt the need or desire to pour over them as I did with the Where’s Wally books. 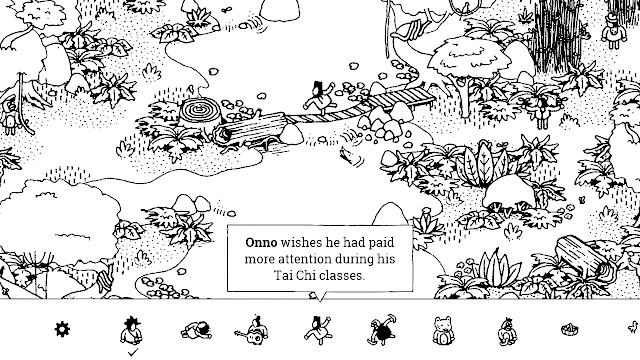 I also found the human-made sound effects to be downright irritating. Find one of the target objects in the scene, and you’ll be “rewarded” with a human-made “bing” sound, which again contributes to the deliberately amateur look and feel that the developers were going for, but is nothing short of aggravating on the ears. Every sound within each scene, too, from the animal noises, through to the opening of tent flaps and pushing of hay bales, is accompanied by human sound effects, and within the first hour of play I had to shut this game’s sound off entirely.

I appreciate that indie developers don’t have deep pockets, and turning that lack of budget into an aesthetic direction is a clever and admirable solution. Sometimes it works; The stick figures of West of Loathing were hilarious, and a big part of the reason I continued to play that game. I couldn’t imagine West of Loathing done any other way. Hidden Folks, however, falls flat, because the creative decisions here dampened a vision that is otherwise very solid.

And, while Where’s Wally continues to work as a visual satire even once you’ve found Wally, making it a book that’s worth keeping on the shelf for years down the track, Hidden Folks lacks the necessary personality to make replays worthwhile. There’s a fair few levels to play through, though some of them are “introduction” levels, and tiny in scope. You’ll be done with those in mere moments because they’re simply designed to teach you what you’ll be interacting with in the “main” scenes ahead, so it’s a little deceptive for the main menu to claim these as “levels”. After a few hours play, you’ll be done with this one, and you won’t be coming back to it. 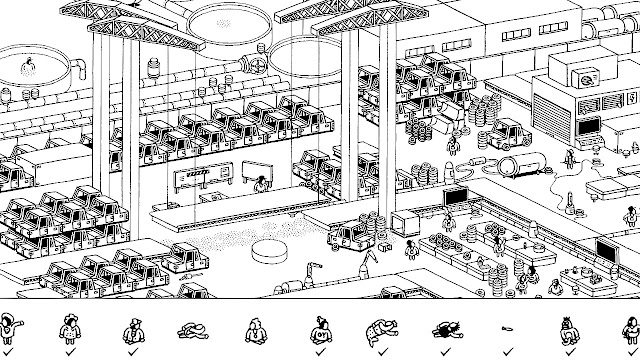 Hidden Folks is good as a mild diversion, but doesn’t offer much beyond that. The development team seems to have missed what made Where’s Wally books truly special – it wasn’t simply in packing the books full of stuff, and then challenging people to find the proverbial needle in the haystack. It was in filling the books with vibrant, exciting, and imagination-stirring scenes. Hidden Folks doesn’t do that.