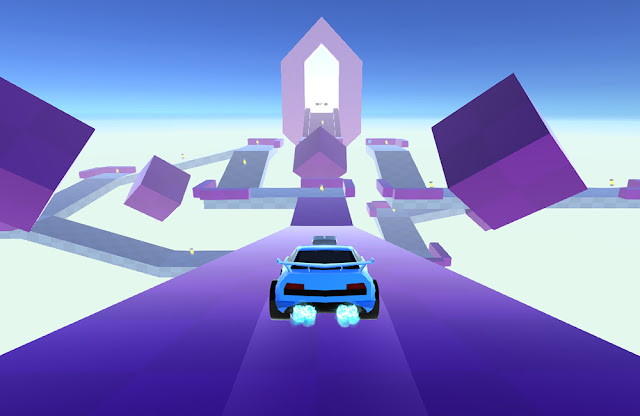 Car Quest is delightfully simple in its concept: it’s a 3D platformer, but you’re a car. You control like a car does—in other words, you can’t jump, save by flying off ramps.

It works, and better than I would have expected. It’s got the best parts both worlds: the creative, gravity-defying level design and spatial puzzle solving of a platformer, and the relaxing feeling of just driving, without the pressure of a race or a timer to beat. Forgiving arcade style controls make your car surprisingly nimble, enabling you to focus on solving puzzles rather than just fighting against the controls just to keep from falling off a platform.

The reason for all this is that you—you getting the car itself—have been chosen by one Lord Blockstar to help rebuild his world, Blocktaria. This once fine block-based kingdom was smashed to pieces and most of Lord Blockstar’s memories erased, and it’s up to you to fix everything up by travelling around in search of artifacts. As well as restoring pieces of Blocktaria and opening up new places to explore, these artifacts also slowly restore Lord Blockstar’s memories. 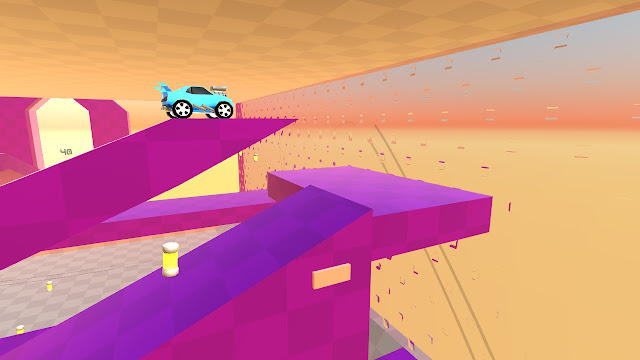 Lord Blockstar narrates your way through all of these, gravitating from genuinely funny to puns that are absolutely awful (often complete with an ill-timed “see what I did there?” to make them even less effective). Though the overall plot doesn’t really go anywhere unexpected or even particularly interesting, it has its moments of charm—an early level that outlines how the car got chosen as the hero of Blocktaria is a particular delight.

It’s as simple a premise as the concept for the game itself, but again, it works. There’s a simple loop of exploring what starts out as a very small piece of the map, finding an artifact, locating the new path that you just opened, and then working your way through whatever puzzles you find in search of the next artifact. Simple, but effective.

You’ll also regularly uncover portals that lead to other realms. In contrast to Blocktaria’s ever expanding network of paths, jumps, and buildings, the other realms are their own little self-contained worlds, usually tied to a theme: a pirate’s island hideaway, a hedge maze, a planetarium, and so on. They each have their own series of artifacts to find, with the ultimate goal of finding the golden artifact that will in turn open a new path back in Blocktaria. 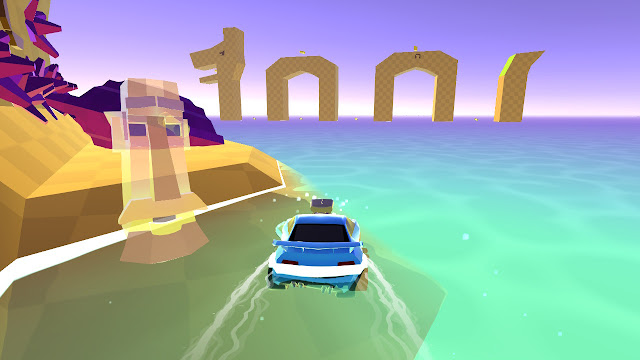 Unfortunately, this is where one of Car Quest’s frustrations starts to crop up. The realms themselves are fantastic, but in order to access them you need to collect a certain number of batteries, which are scattered about the world like coins in a Mario game. At first, this isn’t a problem; the costs to enter portals are low enough that you’d usually have enough batteries just from your usual play. But as the game moves along and the portals become more expensive to enter, you’ll inevitably find yourself grinding for batteries just to get on with the game. All it does is aimlessly stretch out the game, as you drive around in circles until you’ve met the arbitrary quota.

A much bigger frustration—and one that will be fixed soon, hopefully—is the fact that there’s currently no way to revisit the short clip that plays when you find a new artifact, hinting at where your next destination. If you miss one of these or forget about it, there’s no real way to move forward aside from just driving around until you stumble back onto the right path. Naturally, the more artifacts you find and the bigger and more maze-like your Blocktaria becomes, the easier it is to get lost. At one point, after a couple of hours of pointless driving around, I gave up and chose to just delete my save and start the whole game over, that I might get to see the clip again.

It’s worth noting that the developer, eZone, is very helpful on Twitter, and always seems happy to give people clues or outright solutions to people who need them. They’ve also said that they’re working on adding a system for rewatching those cutscenes, which will make a world of difference. 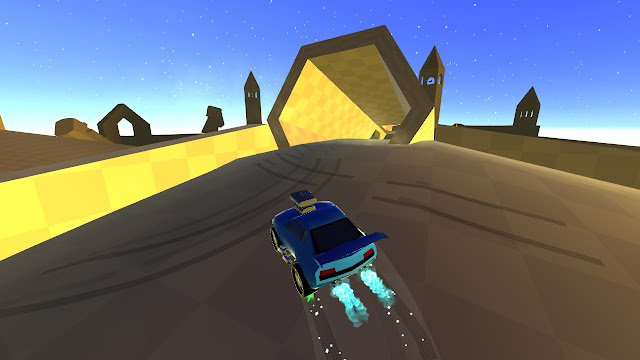 Beyond those frustrations, though, has plenty of fun to offer. Its combination of relaxed arcade-style driving game and 3D platformer is a stroke of genius, and though it’s nothing to write home about overall, the simple plot holding everything together has its moments. It looks good, too, with its low-fi blocky aesthetic, and the soundtrack, while not especially memorable, does what it needs to.

That’s really what Car Quest comes down to: simplicity. It’s a simple game built on a simple premise, but its focus on getting the fundamentals right means it delivers where it needs to. It’s fun, relaxing escape, and sometimes that’s just what you need.