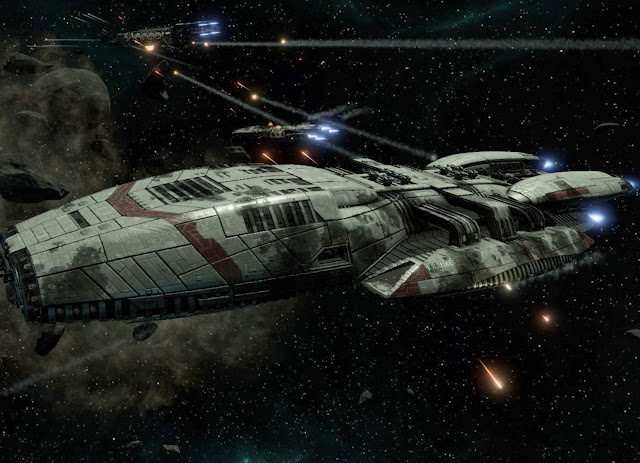 Battlestar Galactica would probably be my favourite science fiction series. Gritty, nihilistic, and philosophically dense, I’ve found myself more intrigued by it than the warmth of something like Star Trek, the high adventure and fantasy of Star Wars or the more… alien… sci-fi out there. The reason that Battlestar Galactica is so poignant is because it’s not a far-flung hypothetical. It’s intensely related to how we see humanity today.

Related reading: Our review of the initial release of Battlestar Galactica: Deadlock on PlayStation 4

Within Battlestar Galactica, my favourite moments are earlier on, when what is left of humanity following a cylon (sentient robot)-created apocalypse is confined to a small armada of creaking space ships. This fleet, and community, is on a desperate rout to try and escape the pursuing cylons who seem to be able to follow the humans wherever they go. On a blackboard, the president of the survivors of humanity keeps a tally of how many humans are left. It is this moment that the new DLC expansion to the brilliant Battlestar Galactica Deadlock release from earlier in the year, called Anabasis, taps into. And it is brilliant.

The core addition that Anabasis brings to the action is a new gameplay mode in which you control a fleet of ships playing a deadly game of cat-and-mouse to evacuate a cluster of humanity colonists from deep in cylon territory. Practically, this plays out as a survival mode – you’ve got to get through a number of battles while damage to your ships remains permanent from one battle to the next, and with no hope of reinforcements. Indeed, you’ll be incredibly lucky if your resources are enough to keep your existing fleet in good condition. It’s a true war of attrition, and thematically, it suits the Battlestar universe brilliantly, by encouraging players to look at every single resource that they do have as something truly precious beyond measure, and making them really weigh up how each and every scrap is used.

A video looking at the brilliance of the initial Battlestar Galactica: Deadlock release

Additionally, the battles in Anabasis are incredibly tense, because they are not about “winning”, and the humans are almost always going to be overwhelmed. The goal in most Anabasis battles is to simply survive long enough while the FTL (Faster Than Light) drives “power up” in order to make a jump to the next sector. The sooner you can do that, the better, but woe to the ship that gets its navigation equipment destroyed in that last turn and can no longer make the jump. It’s one less ship at the next location and a lot of inevitably dead people left behind. As I said – a war of attrition. Because sectors are procedurally generated, Anabasis also ensures that you can never become complacent on a run through – a relatively safe sector on your last run simply might not exist this time around.

This expansion is accessible immediately after purchasing it, so there’s no need to work through the campaign or anything. It should be mentioned, however, that this mode is also designed for experienced players, and any part of Deadlock can be overwhelming if you try to jump in the deep end. This is a turn-based tactics game where you need to make layered plans on each of your turns, and can spend upwards of 10-15 minutes on a single turn carefully positioning units about the place. Deadlock itself does a great job of easing you into the experience by giving you just a couple of ships to start with. Trying to jump into Anabasis, where you have a half dozen, if not more, ships at your disposal is a quick way to intimidate yourself out of playing it. Especially when you know that poor tactics will be really punished here.

That being said, now that I am playing Anabasis, I can’t really imagine any other way to play Deadlock. The tactical action is fundamentally rewarding, because it’s so complex and nuanced that when a strategy is pulled off successfully, you know that you’re totally responsible. Combine this with the desperate flight to survive, and the strategic tension is right up there, with a genuine feeling of achievement at the other end. 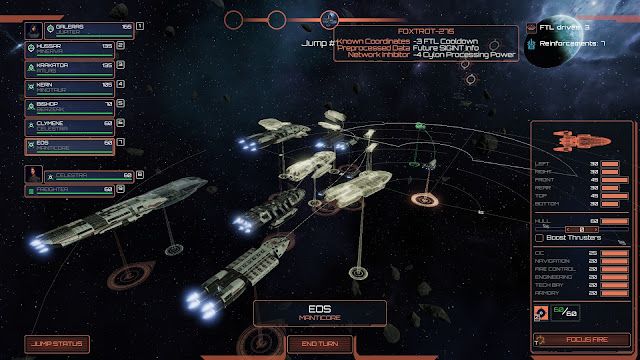 What Anabasis lacks, however, is the commentary on humanity. What made that initial flight from the cylons in the Battlestar series so compelling wasn’t just the galactic strategy, but the way that it exposed the frailties – and strengths – of humanity, and the socio-political ideological conflicts that played out beneath such tension. Where is it worth compromising dogma when there’s a greater cause at play? What sacrifices – if any – are acceptable? How do you maintain a functioning society at what seems like the event horizon to the complete failure and annihilation of humanity? Was Machiavelli on to something? These are just some of the questions that the TV series deals with at length (it’s by no means an action-based sci-fi), and Anabasis ignores the lot of it.

Of course, Anabasis – and Deadlock in general – isn’t built around the narrative of the series either, and this is just a pointer to where the team at Black Lab Games might want to go in the future, perhaps as a sequel. Blending richer storytelling in with the impeccable sense of aesthetics and universe that is already in this base could only help. This is especially true given that each individual battle tends to roll on for such a long time. Giving players that variety as a way of giving them a mental break would help to round out the Deadlock experience – moving it from the sense that it’s a hardcore strategy game to a more general science fiction experience, without compromising on the depth of its gameplay systems.

It’s truly impressive just how substantial the Anabasis expansion is; by rights it could be an entirely separate game in the Battlestar Galactica Deadlock series. But Black Lab Games and Slitherine opted to make it an expansion, so it’s an excuse to go back to that base game if you’ve put it down for a while, or finally pick it up if you somehow missed it the first time around.