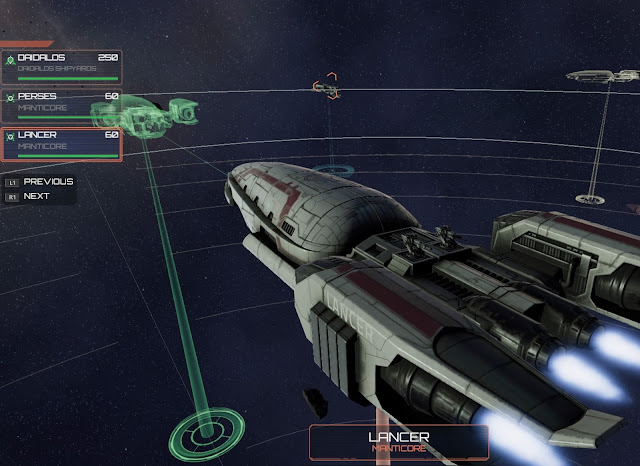 It is my sincere hope that the executive team at EA play Battlestar Galactica: Deadlock, and then pick up the phone to Paul Turbett and his team at Black Lab Games, and ask them to help EA in making Star Wars games that are respectful and true to the source material. Because that’s what Deadlock is. Even looking past the fact it’s a really good, deep tactics strategy game, it’s also one of the best examples of a developer really understanding a licensed franchise and doing it justice that I’ve seen in quite some time.

Related reading: This game builds on the engine of Star Hammer: The Vanguard Prophecy. Matt reviews that one here.

Battlestar Galactica, the show, is a few years old now, so I guess it’s possible that some people wouldn’t even be aware of its existence these days. If you’re one of those and reading this review, please go out and watch the show right now, because as far as I’m concerned it’s the strongest science fiction television has seen this side of the very best Star Trek generations. It’s a series that deals with human frailty, corruption, politics, religion, existentialism, science fiction discussions like artificial intelligence, and plenty more themes besides, and it does all of that within the context of a very watchable mix between space faring science fiction and touches of the western genre.

Battlestar Galactica: Deadlock is more focused than that, and largely concentrates on the battles between the human fleets and the cylon robotic enemies. But, in addition to creating picture-perfect recreations of those battles and the ships that fight in them, Deadlock also offers a narrative, which is canon to the overall franchise, and gives players plenty of opportunities to make decisions that impact on the way the narrative plays out. So it has that element of moral conflict and the challenges of being an under-resourced commander squaring off against a far more powerful and disciplined enemy, and that is so important to the grim, gritty tone of the television show.


The challenge that some people will face in playing Battlestar Galactica is that it’s not the most accessible of games. Originally a PC title requiring a mouse and keyboard, the interface itself has been ported well enough to the PlayStation 4, but right from the outset you’re going to feel almost overwhelmed with the tactical decisions that you’re going to need to make. Each ship has different damage zones, and you’ll need to manoeuvre your ships around to protect damaged sides, lest the entire ship be broken apart by a lucky strike. While at the same time looking for weaknesses in the enemy ships, of course. You’ll also need to account for height, as battles play out in a full 360-degree environment (it’s space, not land battles). Each ship has numerous resources, including torpedoes, swarms of single-pilot fighters, hacking tools, defensive manoeuvres, and so on.

And then there’s the fact that you’ll not be able to react to your opponents as neatly as you would in most tactics games. Generally speaking a tactics game works on a “your turn, my turn” structure, where you’ll take a turn, then your opponent will; much like chess, really. This structure allows you to be highly reactive to your opponent’s strategies, and to a great extent removes the real-world strategy challenge of not being sure what, exactly, your opponent has in mind. But in Battlestar Galactica: Deadlock, you’ll issue commands to all your units at the same time that your opponent does, and then both sides will have their turns play out simultaneously. If you assume that an opponent is going to do something, but they zig, rather than zag, you can put your ships in a dangerous position indeed.

As a result, Deadlock requires more careful strategy than most tactics games, and the AI is quick to capitalise on any mistakes you might make. The game does a good enough job of easing you into its layers of strategy (I haven’t even mentioned that there’s also a top-level strategy layer where you need to direct fleets around a sector of the universe, build new ships, and so on, but it’s there), but it can still be overwhelming, even in the earliest battles, where you’ll be in control of a half dozen weaker ships, if that. 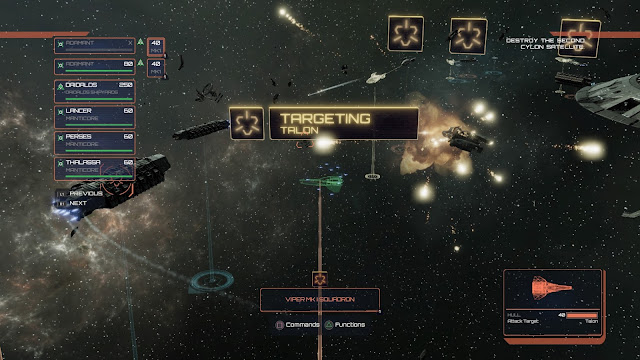 I don’t think there’s much that Black Lab Games could have done to make Deadlock more accessible, and I don’t necessarily think it’s a bad thing that this is a game that is specifically designed for people who like their strategy games. The nature of strategy means that the most committed fans want depth well beyond what a newcomer can handle, and Deadlock is for the former audience, but it does need to be noted that, good as it is, Deadlock will only ever appeal to a very small niche as a result.

It really is good, though. As you build up a fleet and develop ever more complex strategies, you’ll find yourself sitting back and looking at the tactical map, filled with lines, bars, data and statistics, and really feel like the commander of a fleet. There’s enough to the strategy that each player will be able to develop their own unique tactics, whether that be to send ships wide to flank around, or drive a wedge hard with the whole fleet and hope to overwhelm a position. Missions have a habit of throwing up new challenges and objectives mid-fight, and sometimes that will leave you in a difficult position indeed – particularly the first time you play a level and you can’t anticipate what’s coming up. That’s part of the thrill of it all.

And then there’s the reward of the replays at the end of a battle. Throughout a mission, the game collects all the data of all the movements of each ship, and at the end allows you to replay the entire thing, while the game’s engine renders it in a very cinematic fashion, dynamic camera angles and all. It’s in these replays that the Battlestar coat of paint is really driven home; the background music is authentic, each and every ship is detailed to a degree that you’d just never expect an indie developer to be capable of, and set against the vast reaches of space, the wordless narrative that these battles tell is nothing short of phenomenal. I’ve watched Battlestar Galactica through each season numerous times, and while I love the way the show depicts human drama, this game has given the space conflicts between human and cylon a level of drama that even the show isn’t able to achieve. 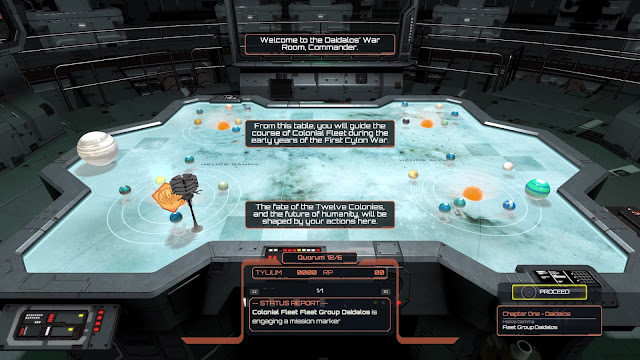 Battlestar Galactica: Deadlock serves a particular niche; it’s for people who are both strategy game fans and Battlestar Galactica fans. I don’t know how many of us are out there, but I hope there’s enough that the entire development team gets rewarded for the excellent work that they’ve done. Yes it’s a budget game and a really authentic Battlestar Galactic experience really should also have solo flight and ground missions, but as a complement to the overall franchise, I couldn’t ask for more. This game is brilliant.