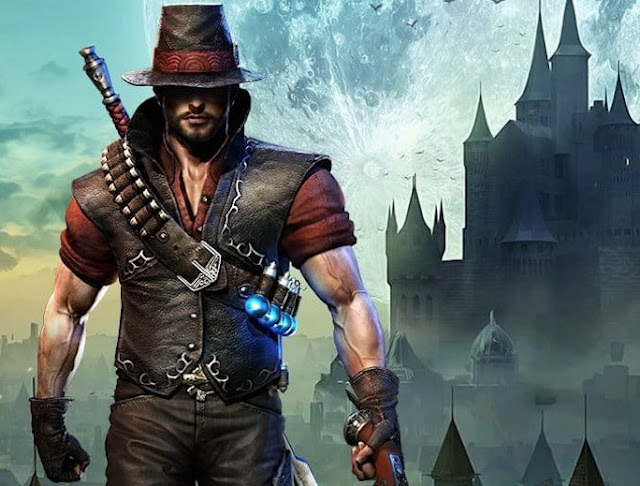 One of the problems that “Diablo clones” face is that their genre is named for competition that’s almost impossible to beat. Diablo has barely missed a step since its original release, so many years ago now, and with Diablo 3 going from strength to strength, it takes something really special to catch the eye of any but the most dedicated genre fan. Most players will be happy sticking to Diablo. With that in mind I do hope people give Victor Vran a shot, because it’s so much more than a staid clone.

Victor Vran is an interesting blend of homage and satire to the gothic nightmare that has been Diablo’s hallmark. Environments, enemies and structure will be immediately familiar to anyone who is familiar with classical gothic horror; there’s a city that has been over-run by hellspawn and undead, and it attracts bounty hunter heroes who attempt to stem the tide and save the few remaining citizens that hang on for dear life. Victor himself comes to town following the trail of a hunter friend who he lost contact with, and finds himself unwillingly embroiled in the desperate fight against evil.

The setting is so overbearingly cliched that it works. For me, it immediately reminded me of the old Dungeons & Dragons Ravenloft setting, which took every popular monster and gothic tale and turned it into a gameplay opportunity. One of my favourite adventures from Ravenloft had the party of heroes coming across a village that was besieged on all angles by a host of the dead, with only a tiny few people left, barricaded within the one tiny section of the village that still hadn’t been toppled. That grim fight against the odds (and the lack of friendly faces and help) made for a very different tone of adventure to most of what Dungeons & Dragons offers, and it’s this tone, setting and aesthetic that Victor Vran really plays up. 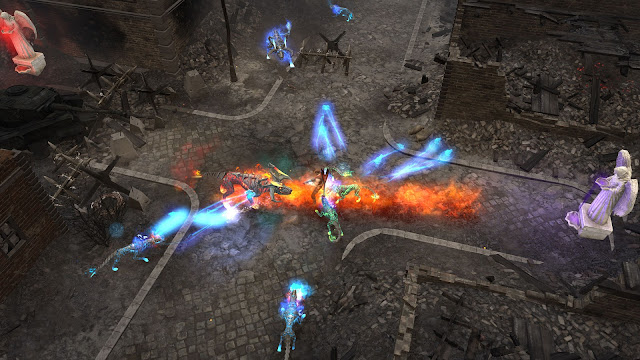 If there’s any doubt about whether it’s a satire or not, you’ll be set straight almost immediately a narrator’s voice kicks in. This mocking voice isn’t constant through the adventure – that would be maddening – but it kicks in at just the right points to offer a bit of sarcastic wisdom, through to outright mockery of Victor and his situation. It’s well written, often very funny, and is a narrative feature that does just enough to ensure that this game has a comedic tone that Diablo generally lacks; they might look the same, but Victor Vran has a personality all to itself.

Mechanically, this is an action RPG in the Diablo vein, through and through. Loot drops are frequent and scaled nicely, so with every new environment you wander into, you wander back out with all kinds of shiny new things to play with. Monsters tend to come in hordes. Even bosses are weaker than you might expect in themselves, but when they’re surrounded by plenty of little allies, they can be more than a headache.

Of course, the reason to have hordes is so that Victor’s special attacks can pack a visual punch. Just about every special attack is designed to do damage to everything within a perimeter, and there’s nothing quite like wading into the middle of a horde before unleashing a special attack that destroys a wide ring of enemies. You’ll also get to do that frequently, because the next horde of enemies is never far away, and the cooldowns for the special abilities are rapid to a generous degree. Even on the Nintendo Switch’s relatively small screen (relative to TV or PC monitor, I mean), the fireworks in annihilating 20 or 30 enemies at once is genuinely impressive. The only downside is that the Nintendo Switch seems to struggle with a critical mass of enemies ever so slightly, ever so rarely; I had a noticeable frame rate drop in a few places; not enough to inhibit the flow of the game, but something I don’t remember from a PlayStation 4 playthrough a year or so ago. 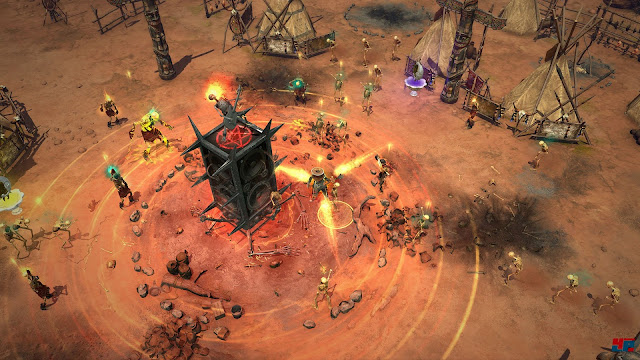 Playing on the Switch screen is also an exercise in making out tiny details. Because the camera is zoomed so far backward, it’s sometimes possible to lose Vran’s location as the enemies pile on and the fireworks start to build. Text and other elements remain readable enough, but some of the game’s enemies offer some really nice designs, and it’s unfortunate that it’s hard to make those designs out. Furthermore, the appeal of getting loot takes a bit of a hit when the prizes show up so small on screen. These issues, of course, don’t count when playing the Switch in docked mode, but it’s going to be interesting to see if Diablo 3 suffers from the same issue on its release, or whether the folk at Blizzard find a way around it.

As a complete edition, Victor Vran comes with a whole host of features and DLC packed in, and it really does offer players a lot. I tend to find Diablo clones last me longer than most other genres, because I find they work better in short bursts than long play sessions – an hour, rather than an evening – so being able to delve through the dungeons on the train is an ideal way to play. Some of the DLC included in the game is inspired by Motörhead too… just in case Victor Vran wasn’t ramming its sense of humour explicitly enough.

It’s that sense of humour that helps Victor Vran to step out of the shadow of its genre namesake. It’s a fully feature-rich example of the Diablo clone, is well balanced so that it never becomes tiresome to play, and offers plenty of shiny loot. The gameplay itself might not be breaking down any boundaries, but between this and Titan Quest, the Nintendo Switch is not lacking for quality horde slaughtering action.

Square Enix is bringing The Last Remnant to PlayStation 4