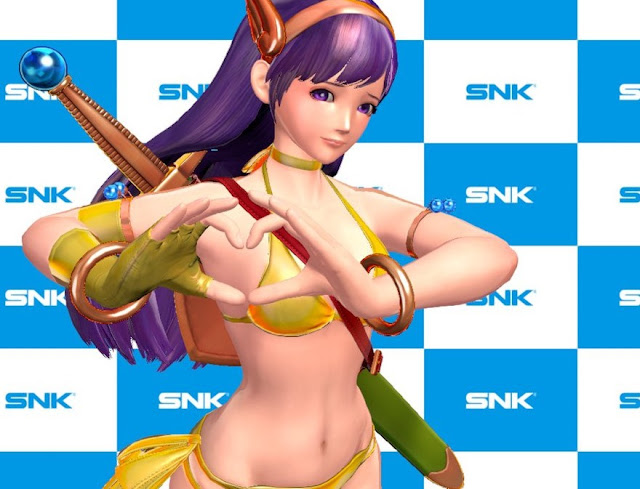 Wow does Athena look good in a bikini. I mean, there’s other good stuff in SNK Heroines, but let’s just cut right to the chase here. I was always going to love this game.

More seriously, SNK Heroines really is is my kind of fighting game. It’s well-presented, easy to get into, light in tone, and boasts plenty of fanservice. Featuring an all-female roster, pulled from a variety of SNK franchises, it might be a little lighter on content than some other fighters out there, but it makes up for it by being a game I actually want to play. Take that, Tekken, with its giant roster and cinematic story mode!

In a similar vein to last week’s Blade Strangers, instant accessibility is core to the SNK Heroines experience. There’s no need to remember thirty button combinations to launch into special attacks, and you don’t need to manage layer after layer of power bars and special meters. Instead, you pick whichever two girls take your fancy (Athena!), and then get kicking with the button smashing. 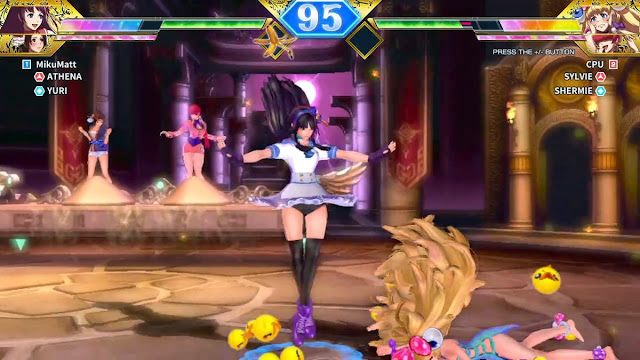 For the most part, you’ll be using the four face buttons on the controller. Two handle a range of normal attacks, and a third performs a grab. The fourth is for specials, and the use of those drains a power meter highlighted on the top of the screen. Once your opponents are down to a critical level of health, you perform one final special attack and, as long as it connects, you win the stage. The shoulder buttons are reserved for block and tagging characters in and out.

This system is actually a really neat way of keeping the tension high while playing. There’s no way to defeat your opponent by emptying their health; you need to perform a final special move, so when both sides are down to their “critical” health status SNK Heroines becomes a tense dance off with both sides tries to find an opening in their suddenly defensively-minded opponent, knowing that if they make a mistake their opponent will have the opening they need. This approach to health also opens up some truly spectacular come-from-behind wins.

There’s the odd moment where SNK Heroines can be frustrating. I am not a fan of combat systems that allow a player to juggle their opponent against a stage wall – it’s incredibly irritating to the player on the receiving end, and it’s a little too easy to do it here. Still, with the obvious intention of the game being to create something accessible but not without nuance, SNK Heroines is a resounding success, offering a learning curve that’s steady and enjoyable. Each character has a distinctive style, strengths and weaknesses, and so, while the health bar is actually shared between your two girls, you’ll find yourself switching between the two through a fight, looking for ways to disrupt your opponent’s rhythm, or counter their own attacks. 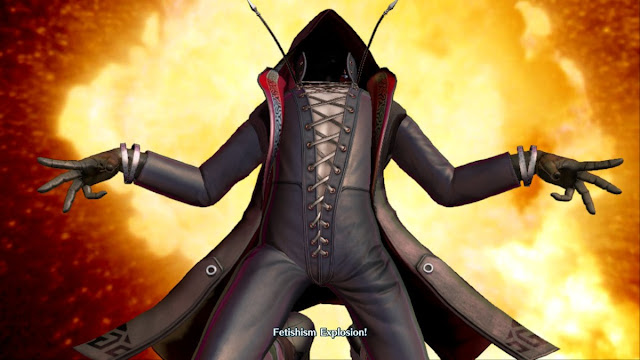 The other neat thing that helps to spice up SNK Heroines’ basic mechanics is items, which are dropped on the play field and can do everything from disrupting your opponent’s movement to dealing direct damage to them. The range of items and their impact isn’t anywhere near what something like Smash Bros. offers, of course, but that extra random element gives the game an extra dose of strategy and helps round out what is a clean and interesting combat system that never gets too bogged down in complexity.

The presentation in SNK Heroines does everything it can to convince you on how lighthearted it all  is. Looking beyond the obvious fanservice and the various costumes that each character can wear, the levels themselves are bright and colourful, and attacks come complete with a wide range of visual effects, such as flowers and sweets and the like. Because character models are in 3D (even though they fight on a 2D plane – think Mortal Kombat rather than BlazBlue), there’s a nice sense of solidity to the movement and action. The backgrounds themselves are static, but whichever girl is not currently in the fight can be spotted in the background, cheering you on while waiting for a chance to tag in, which helps add some energy to the environments.

Of course, the real focus of SNK Heroines is the girls, and they are absolutely gorgeous. Each has a distinct personality on the battlefield, and while their wardrobes are a bit limited at this stage (more on that in a moment), what is there is stunningly designed to suit their historic characterisation. Going in I had assumed that ultimately each character’s “best” costumes would be a variation on swimwear of lingerie, but that’s not the case at all. In fact, most characters to not have swimsuit options at all. Rather than head down the same route as Dead or Alive 5 DLC and give each character variations of the same costume (even when it didn’t always work for that character), SNK Heroines’ designers went to real effort to create fanservicesy costumes that were unique, and yet equally sexy, to each character. So, yes, the game is shameless, but it’s also executed perfectly. 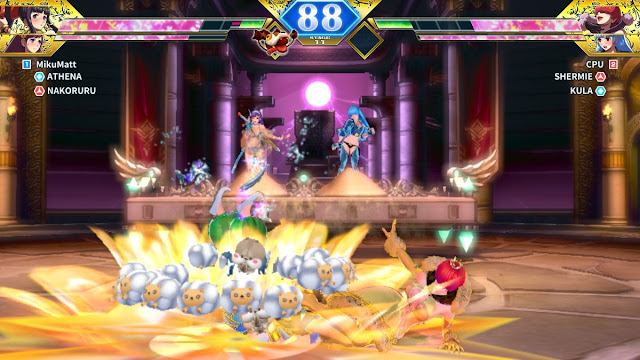 The only real problem in SNK Heroines is that there’s just not enough of it by modern fighting game standards. I do think the roster itself is fine, though. There are 12 characters, which I know some will find too few, but more than enough for me. However, each of those characters only has two alternative costumes, and given how hard SNK Heroines was sold on the fanservice, that’s a bit underdone. There’s almost certainly plenty of DLC on the way, but as it currently stands the process of unlocking all the stuff you like isn’t going to take very long.

The gameplay modes are thin, too. There are only four of note. The main feature is, of course, the story mode, which is genuinely funny, fanservicey stuff, and weirdly reminded me of how the plot in the each of  the Dead or Alive Xtreme titles plays out. It’s creepy, sure (the girls are all kidnapped and forced to fight for the benefit of a leery pervert with surveillance cameras everywhere), but it’s ridiculously silly. Outside of that story mode, the only “score attack” option is survival, which is in itself perfectly fine, but for someone like me, having time attacks and other “high score” single player options is important to the longevity of a fighting game, and survival mode in itself doesn’t cut it. Then there’s a bog-standard Vs. local multiplayer option, as well as online play. 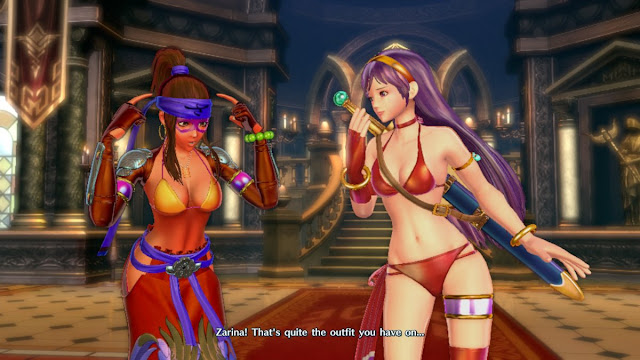 Then again, I can’t see myself ever removing SNK Heroines from my memory card, because it’s ideal for some quick bursts of highly entertaining action. Call it “casual” if you want, but this is the ideal fighting game for me… and who knows? It might well be the start of the new king of fanservicey fighters, what with Dead or Alive 6’s stated intention to ease back on that side of things. And Athena really does look stunning in her bikini. I’ve been waiting many King of Fighters games for that.

Langrisser I & II gets its first trailer, and is so very exciting