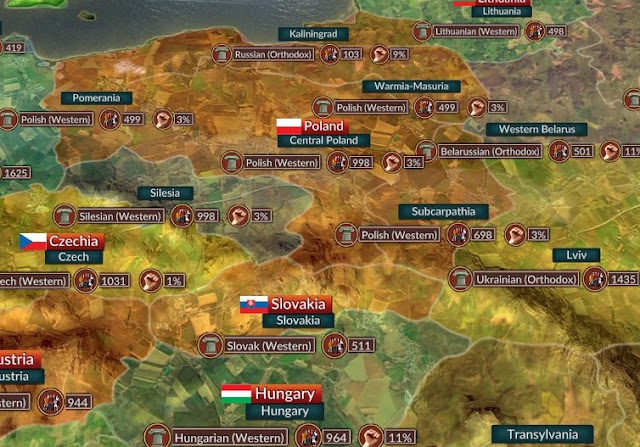 I would never have predicted that the Nintendo Switch would end up with a strategy game of the scale of Realpolitiks. World Conqueror X was pushing things far enough as a complete simulation of World War 2, but that was almost exclusively focused on the battlefield tactics of the war. Realpolitiks’ combat is just one tiny facet of the overall experience.

Realpolitiks is a genuine grand strategy experience, in which you need to manage military conflict, but also your chosen nation’s economy, its scientific and social development, and diplomacy with other nations. It’s a game that simulates the social, cultural, and political impact of the UN and nuclear weapons, of stock exchanges and the Olympic games, and the balance between democracy, authoritarian and totalitarian regimes. It’s a game that is only too happy to make it difficult to “win” if you play as a minnow, because let’s face it, nations such as the US, China, Japan, Brazil and those in Western Europe simply have so much of a head start they’ll never stop being global powers.

Mind you, it’s also possible to turn things around. By opening my borders and allowing the rapid influx if migrants, while also focusing on economic development so there were plenty of jobs and a robust welfare system, I was able to make Australia the most powerful nation in the world, and because I had formed a number of key alliances so that not once was I involved in a military conflict. It wasn’t easy, but I did it. 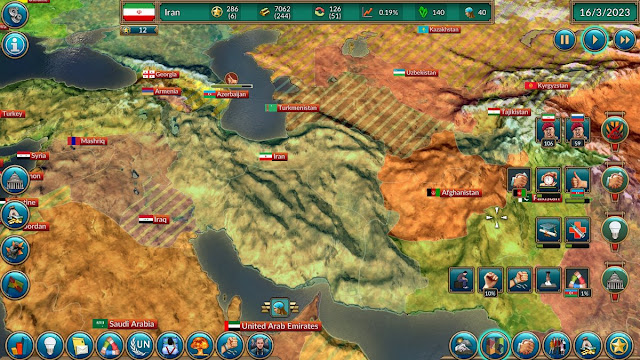 Of course, it took me a bit of work to get to that point. Realpolitiks has a fairly comprehensive tutorial, but even after playing through that, the array if icons around the screen and the influx of information means that the only way to become comfortable with its systems is to spend a lot of time playing it. This was true with greats of the genre, such as Europa Universalis IV, and it’s true of this one too.

In Europa Universalis IV, the steepest learning curve was the economic systems, which were pinpoint authentic, but unwieldy and never explained well. In Realpolitiks, the bigger challenge is the military side of things. At first, building armies is a confusing process (if you’re like me, you’ll spend ages trying to figure out what you need to do to raise the maximum unit numbers), and after that, if you do get stuck into a war, the way battles play out is really confusing. A menu with a wide range of different actions will pop up, and you’re meant to select which action that might be – be it ambush, attack enemy aircraft, advance on enemy positions, and so on – with little more indication about the impact that would have than a little bar that highlights a probability to success. But when there are three or four “best options” available, it would have helped to have more granular data to work with.

It really is possible to get through Realpolitiks with minimal military conflict if you so desire, but you’ll still need to build up the military forces, because one of the key mechanics in the game for ensuring your stability is establishing a “bloc” of nations. Much like the European Union in the real world, these blocs feature independent nations that provide one another with support and aid if needed. Having a couple of powerful allies is a good way of ensuring no one would be brave enough to attack you, but many of the nations won’t join a bloc until your forces have reached a certain size. 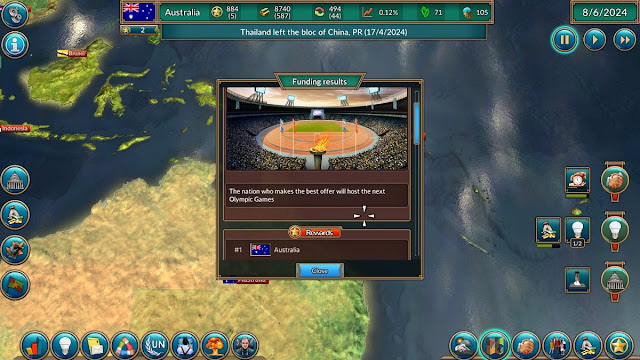 Which brings me to the core strategic considerations to make in Realpolitiks; just about every decision you make will have knock-on effects, which can cause your nation no end of problems. Military decisions you make can affect your nation’s economic health. Policy decisions might affect unemployment, which can lead to an unhappy nation, riots, and in extreme cases, bring down your entire bloc. Unhappy citizens are also likely to vote to throw you out (if your nation is a democracy), and while you might decide to ignore those results and shift your nation to become a totalitarian regime, this will reverberate through all of your international relations, and – oh look! – the UN only recently passed a resolution preventing totalitarian regimes from having armies that are too big, forcing you to reduce your force size, and priming you for an invasion.

Yes, running a nation is dealing with a ridiculously complex web of cause and effect. Realpolitiks still ends up modeling things on the side of “a touch too simple,” as it turns out, and after a couple of hours play a pattern of superior choices makes itself clear, but credit has got to go to the development team for taking a crack at something as complex as a complete political system.

Less credit should go to the AI, however, which is far too easy to exploit, and far (far) too passive. I appreciate that the developer didn’t want to turn the entire game into something bloodthirsty, and a bloodthirsty AI would have only encouraged bloodthirsty actions from the players, but it’s far too easy to leave yourself open to military invasion, knowing that it probably won’t happen, as long as you appease the world in other ways and keep a positive global reputation. The AI isn’t really aggressive in any other way, either; it’s content to make bad bloc-building decisions, leave its stock market underdeveloped, not big aggressively on the Olympics (a major boon to your economy and nation status), and leave the space race to others. This is why strategy games need difficulty options; because more advanced players need AI willing to make more aggressive decisions 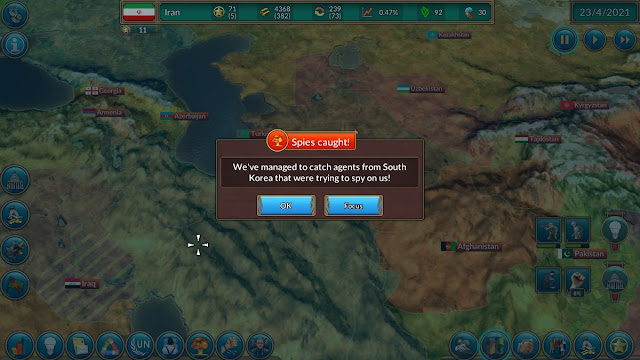 Perhaps the one other thing missing is the ability to apply soft diplomacy to the world. The truly powerful nations – such as the United States – has historically enjoyed success through the export of its culture and media; the fact there’s a MacDonald’s on every corner, and a Marvel film in every cinema, is as much of a reason that Australia has remained a firm ally of the US rather than shift support to the more geographically-appropriate China, Japan or Russia, as much as anything else. There’s some mild propaganda features in Realpolitiks, but the impact of them is downplayed too far for one of the most subtly powerful weapons a powerful nation has at its disposal.

You’re able to play as almost any nation in the world in Realpolitiks; including some “edgier” choices like Palestine, Taiwan (diplomatically named “Republic of China”), North Korea and Myanmar (incorrectly and un-diplomatically named “Burma”). The game’s difficulty is determined largely from your nation’s starting position in the world, and available resources. In other words, playing as decrepit Palestine is a sure-fire way to give yourself a difficult challenge, while playing as the US is effectively easy mode. Again, those starting states of each nation are fairly authentically modelled, though once the AI takes over there can be some weird results. Japan wouldn’t form a “bloc” with China before, now, or any time into the future, folks. 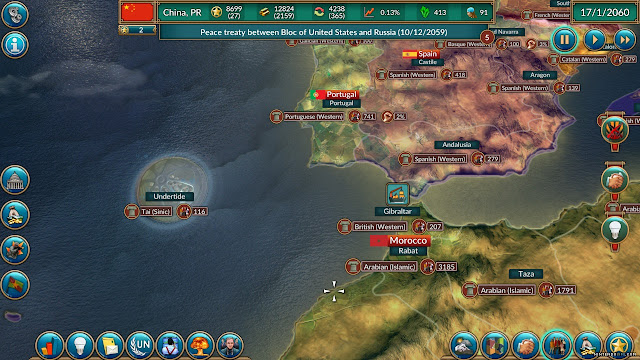 Realpolitiks is not the kind of game I would have ever expected on Nintendo Switch. It’s not the perfect grand strategy experience; Europa Universalis IV may have slightly less complex and interlocking systems, but it offers deeper AI and greater complexity in strategy, and that’s far more important to a grand strategy’s longevity. That being said, Realpolitiks is a really delightful game to have for on-the-go play, on a console that I would never have guessed would end up with something like this on it.