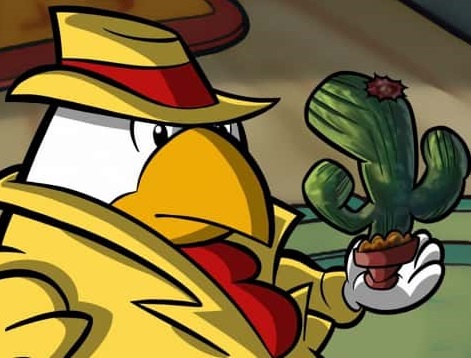 When I was in high school, much of my time was spent on the PC my parents bought me for Christmas. Their intentions were good, I would need a computer in order to do research and do assignments for high school. Little did they know, most of my time was spent sneaking in sessions with LucasArts and Sierra point-and-click adventures. Despite the two companies having very different approaches to point-and-clicks, the consistently good writing, relatable characters and bizarre worlds kept drawing me away from my Nintendo 64 and PlayStation for a good few years.

Detective Gallo looks to emulate some of the old classic point-and-click adventures from yesteryear. Unfortunately, it feels like a featherweight in comparison. Detective Gallo, as a game, is more like Detective Shallow, as the narrative and characters of this game are rather one-dimensional. Almost as if it was hatched overnight.

The world of Detective Gallo is filled with a number of anthropomorphic chickens and roosters. Detective Gallo (Gallo is Spanish for Rooster) is a detective that self-narrates his cases with a heavy noir style. He finds a client in his office, named Phil Cloro, and takes on the case to find the killer of Phil’s pot-plants. It is very silly, but much of the writing is too fowl, and ultimately lowers the standards of the game considerably. I found myself ready to crack as a result of the poultry one-liners being offered in the game. 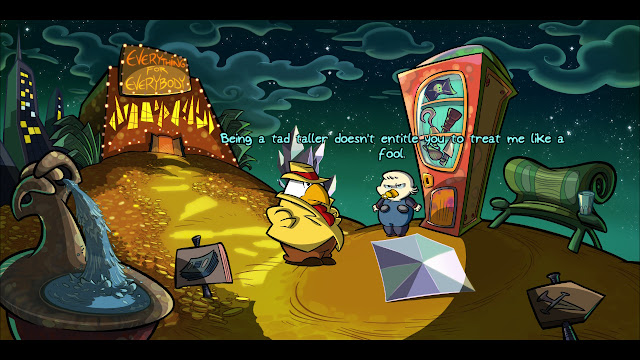 Aside from Detective Gallo and Phil Cloro, only one other character in the game has a name. The rest are known as “Taxi Driver”, “Construction Worker” and so on. Detective Gallo’s constant narrating as if he were David Attenborough on a duckumentary becomes grating after about five minutes. This is mostly due to Gallo seemingly needing to tell you all of his life rules. At one point he said, “Rule #304 of Gallo: If you have to collect something, start with your ideas”, and while this is certainly a good rule to follow, it would not be an eggsaggeration to say that he will tell you at least 304 Rules of Gallo during the course of the game.

The gameplay itself feels directly lifted out of a classic LucasArts game. The way Gallo moves around his surroundings and speaks to the NPCs has a very retro feel to it. As the game progresses, Gallo collects a number of items that can be used in different situations. Early on, Gallo can use an extendable hedge trimmer to retrieve a bullet casing from underneath a couch. Puzzles are mostly simple tasks like this, though sometimes the game requires the player to just try every item in the inventory on everything in the game as some moments seemingly have zero clues to assist in moving the plot along. I spent a good twenty minutes cooped up in Gallo’s office looking for his notes because I had no idea that he wrote one of his safe combination numbers on a bit of paper in invisible ink. To add insult to injury, Gallo lays an insult upon the player every time they experiment with something and get it wrong. It is almost as if trying to explore the world and work out the mechanics is a punishable offense. At least in the classic Sierra games, the game would blame the developers for not being as smart and sophisticated as the player when they try something out that didn’t quite work out.

Detective Gallo isn’t all terrible though. The hand-drawn artwork is simply marvellous, and the characters all look very much like something out of a 90’s Saturday Disney cartoon. As everyone in the game is a chicken or rooster, it feels very inspired by the original DuckTales cartoon. As I absolutely adore the aesthetic of the DuckTales TV show, so too do I love the art style of Detective Gallo, Footprints Games drawer/animator Maurizio De Angelis and background/colour artist Mauro Sorghienti should be very proud of themselves for how fantastic the game looks. The bright colours, sharp pen-lines and abstract shapes and sizes all meld together beautifully and stop the game from being a complete birden to play. 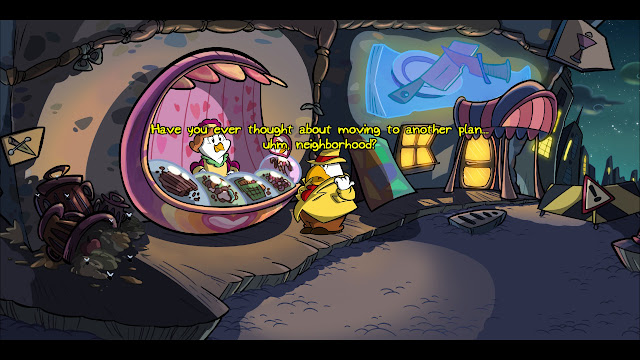 I admit that I could not find much information about the development team at Footprints Games, but as an Italian team, I do wonder if perhaps much of the game’s charm was lost in translation. Much like how many dubbed anime programs miss key moments such as mannerisms and jokes that the Japanese writers were making, I can’t help but think that perhaps the game may have been much better written in its native Italian. Despite some really good work being done within the game, and it is clearly a labour of love, there is just too much wrong with the game to ignore and give a pass to.

I began Detective Gallo feeling quite peckish for some good point-and-click action. Unfortunately, though, the game has me migrating elsewhere, as Detective Gallo’s cockiness as a character was very grating, and I found myself beginning to moult as a result. The visual artists for the game are absolutely no yolk and deserve high praise. Therefore, I will egg on the developers at Footprints Games, as there is some potential hidden within Detective Gallo that gives me hope for them to create an excellent game that will ruffle everyone’s feathers.