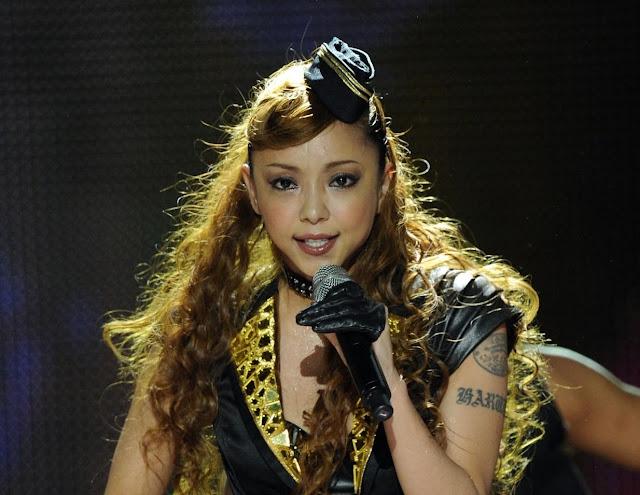 So I’m in Japan for my annual pilgrimage (for Tokyo Game Show and other things). In most years when I’ve been here I’ve also indulged in a bit of travel journalism and shared stories and photos of my travels. I’ll be doing some of that this year as well, but also thought I might share more general stories about what I see and observe while here.
The thing that’s absolutely dominated the media cycle for the couple of days that I’ve been here is Namie Amuro’s retirement. Amuro is quite possibly the most important musician that Japan has produced that very few people outside of Japan are even aware of.
The best way I can describe Amuro is that she looks a bit like a Japanese Jessica Alba, with Alba’s respect as a strong role model for women among Japanese, with Madonna’s talent for setting music and performance trends. For years now Amuro has been the standard for Japanese pop divas, and her decision to completely retire has shattered fans.
One of the fascinating things about this story is that Amuro decided to hold her farewell performance in Okinawa. This makes sense from the perspective that, as an Okinawan, she would naturally want to end where she started. On the other hand, Okinawa doesn’t have a concert venue anywhere near the capacity it needs for a performer that can fill Tokyo Dome – Japan’s mecca to baseball.
You might think that such a decision would disappoint a number of fans that missed out on tickets, but that would be the end of it. But that would be underestimating the respect that Namie Amuro has within Japan. A huge number of people got themselves on flights to Okinawa (and it’s not a cheap domestic flight from within Japan, I can tell you), just so they could stand outside of the stadium for that final concert.
That’s how popular Amuro is.
Amuro made her public performance debut at just 14. And, indeed, she never went to high school; she had a troubled youth and dropped out of school at the youngest age possible. She made that debut as part of an idol group (Super Monkey’s), and with most girls that would have been the end of her story, really. She would have spent a few years performing with that group before being deemed too old to appeal to the kind of people that buy into idol culture, and her career would have been finished there.
But Amuro was able to break away from that scene and establish herself as a solo performer. As such, she was also able to take a great deal of control over her music, image, and marketing, and was able to find a far broader audience. She would set fashion trends by being among the first to perform in certain kinds of clothing (famously, she made high boots popular). Additionally, her behind the scenes work to promote her idea of music and celebrity meant that over time, she was able to establish herself as an influential force for how the music industry itself worked, much as Madonna herself.
Amuro never really felt the need to target a market outside of Japan. She enjoyed popularity across the rest of Asia, and astronomical success in Japan itself, but the reason that she was a largely unknown name outside of Japan is because she – and the team behind her – never promoted her music to a wider audience. She toured Asia, in a limited capacity, but never performed in America, Europe, let alone “lesser” regions like Australia. As such, while some of her music is available on iTunes here, it sits there for people who have been able to “discover” her, rather than because there has been any effort to introduce her to us.
Amuro has a child, a tattoo, and paved her own sense of fashion and performance. For a female super-idol, what she was able to achieve, and what she was able to inspire for future generations of aspiring performers in Japan, should not be underestimated just because white people (for the most part) haven’t heard of her. Amuro is a genuine feminist icon, and her music is pretty damn good, to boot. Japan lost a true icon with her retirement this past week.
– Matt S.
Editor-in-Chief
Find me on Twitter: @digitallydownld