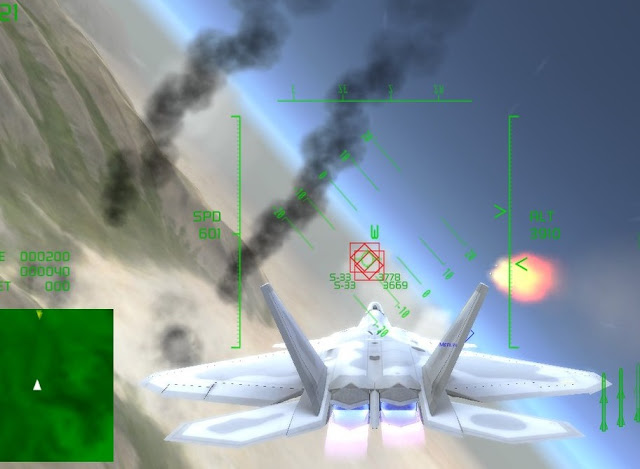 Aircraft dogfight simulators are a bit of a fun treat to me. Because dogfights take place in a full 360 degree arena (the sky) and at such speed, the intensity of skill required in accurately accounting for the speed and line of flight of enemy combatants to take one down provides a thrill the other military games simply can’t equal. Vertical Strike: Endless Challenge is such a tiny slice of that experience, but it’s enjoyable nonetheless.

If you play a military game that focuses on ground combat, technique isn’t much further advanced than aiming directly at an opponent and pulling the trigger. Sometimes, a tank-based game will also require that you take into account the trajectory of the projectile through the air, but that’s uncommon since the point-and-shoot method works well enough to still feel authentic in an abstract kind of way.

Military games set in the ocean do tend to have other considerations to take into account, such as the roll of the swell and trajectories, given how far ship guns can reach. But, really, it’s only in the air where you need to develop an intense understanding of movement, distance, and an intuitive understanding on how your opponents might behave. 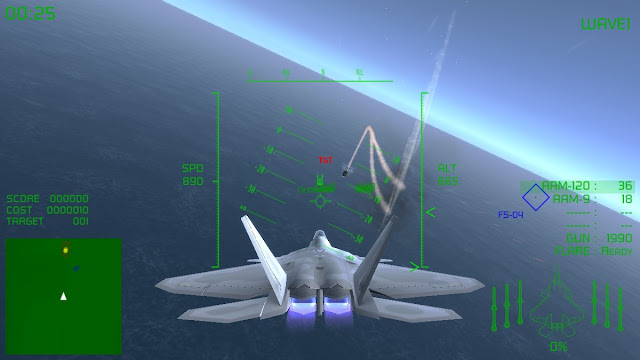 I’ve played a lot of these over the years, and I do tend to prefer a more realistic simulator, but as the Ace Combat series has demonstrated over the years, more arcade-focused experiences can be a lot of fun too. Vertical Strike is a bit like Ace Combat, only without the missions. Instead, you’ve got two endless modes to choose between. One focuses exclusively on air-to-air combat, while the other gives you ground targets to take out as well. You’ll defeat a wave, and then a new wave will start, broken up ever so often with boss battles (bosses being more difficult and tricky enemy planes). You repeat this over and over again until the increasingly-overwhelming waves of enemies get the better of you and it’s game over.

The early waves are too easy for their own good, because you’ll have plenty of homing missiles, and that stock gets replenished after each boss is defeated. Enemies also only come at you from one or two directions, making it easy to keep the enemies in front of you, and thus easy targets for the missiles.

Things do start to get more difficult, though. You’ll run out of missiles midway through a wave and need to rely on the backup machine gun, which is where your ability to aim at where a plane will be in a second’s time, rather than where it is at that moment, comes into play. Enemy patterns also become more complex, so you need to become more maneuverable in order to avoid incoming projectiles. This is the point where Vertical Strike hits its peak. It’s fast-paced game, but not overwhelmingly so, and there’s a great sense of intensity in knowing that there’s a very real chance that a single hit will mean game over. 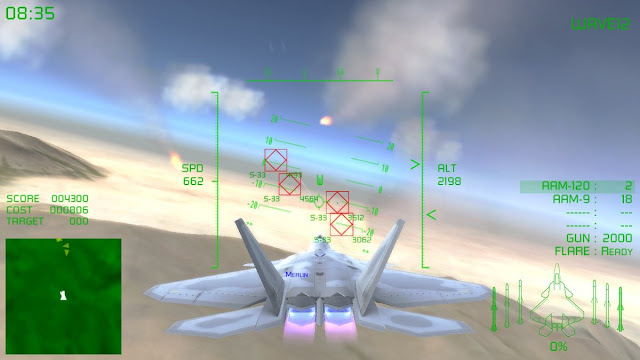 Unfortunately, Vertical Strike is also a little too feature-thin to really make the most of what it’s offering. You’re given a score at the end of each attempt, but with no online leaderboard to compare results, it’s hard to remain too motivated by the high score target. There’s also no progression systems in place, and only a tiny handful of planes and weapons to choose between. I’d be fine with that if there was that leaderboard, but coupled together this is more akin to what you’d expect from a demo sliced out of a full game.

It’s also not the prettiest game. The planes themselves look fine (though enemies are typically not more than dots in the distance, or a shape whooshing past your field of vision quickly), but the main bit of environment that you’ll be looking at – the ground – is a messy smattering of repetitive textures that do nothing to give the game a sense of place. Dogfighting games do generally have nice environments, interestingly enough, because it enhances the sense of space, speed, and soaring through the sky when you can see what you’re flying past (and how small and far away it is). The closest Vertical Strike here gets is giving you a tiny ground object to target in one of its gameplay modes.

Vertical Strike is a super low budget and cheap little game, designed to give fans of the occasional dogfight a quick rush. Thanks to its tight and efficient mechanics, and the steady and enjoyable approach that it has to difficulty escalation, it achieves what it sets out to. Nothing more, and nothing less.

Pathfinder: Kingmaker is going to be so awesome