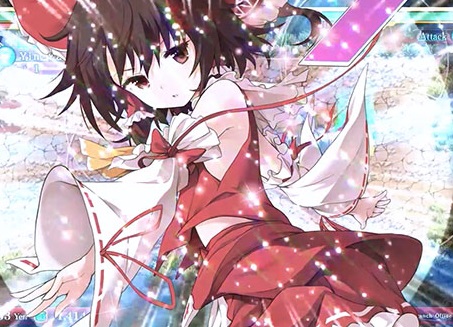 I really liked Touhou Genso Wanderer over on the PlayStation 4. As I’m a self-styled roguelike purist, the closer that developers get to Shiren the Wanderer (the game that provided us with the foundations for the Mystery Dungeon format) the better. When I play a roguelike, I want a seeming unending stream of randomly-structures dungeons, a ridiculous difficulty curve, and if my character is killed, I want to be thrown back to the start of the adventure. A good roguelike should be utterly Sisyphean in scope, and Touhou Genso Wanderer was that. With cute anime girls.

Related reading: Our review of the original Touhou Genso Wanderer on PlayStation 4.

I like Touhou Genso Wanderer Reloaded even more, even though I’m not convinced the “Reloaded” is more than a “Complete + Nintendo Switch port” edition. There’s some light touch improvements here and there, and the “Reloaded” edition offers more characters, story events, and all the DLC, but to suggest this is somehow a remaster or “improvement” on the original game is pushing the boundaries on the terminology a little. To make this more clear; if you’ve already played the original on PlayStation 4, you don’t need to play the Reloaded edition. Thankfully, I’m here reviewing the Nintendo Switch version, and it has been well worth the second dip.

Roguelikes – and I mean proper roguelikes, like Mystery Dungeon games, not the nonsense “roguelites” that every indie gave gets called these days if it has a random element in it – work better on handhelds. That’s just a simple fact of the matter. These games have relatively limited gameplay loops, and tend to move quite briskly. You’ll jump from one dungeon level to the next in a matter of minutes, and that makes it ideal as a pick-up-and-play experience. Touhou Genso Wanderer isn’t quite the perfect portable roguelike because it has ridiculously long story bits, but for the most part, when you’re on the train looking to kill 20 minutes, it’s much more tempting to reach for this game than, say, Octopath Traveler, also released this week. 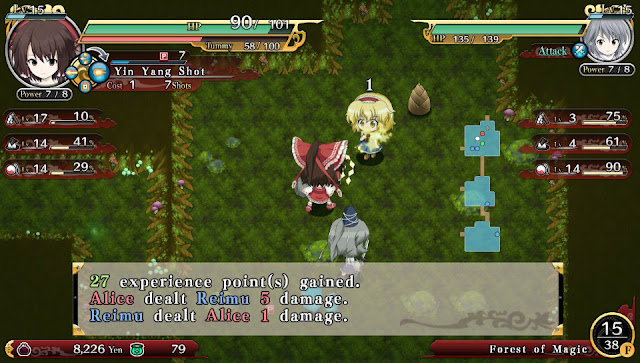 That narrative is the biggest crimp in Genso Wanderer’s style. If you’ve somehow managed to keep up with the loose affiliation of games under the “Touhou” banner, then you might be familiar enough with the characters and world to care when they start talking to one another for half an hour at a time. But, since the Touhou “series” has everything from weird platformers to bullet hells, and very little cohesion between them all, it’s not a series that 99 per cent of people will ever be that invested in. In short, it’s very hard to stay awake during the game’s narrative moments, even though the character design is quite gorgeous.

The amusing thing is that as a Roguelike of the Mystery Dungeon ilk, Genso Wanderer didn’t even need to try to have a narrative. Shrien the Wanderer has been getting by for decades with only the lightest of efforts at storytelling, and Rogue itself, from way back when, had virtually no story. Fans of this genre come to it for the challenge of staying ahead of the difficulty curve, and to make the most of the hands that fate deals them.

When the monsters, loot, and level designs are randomised, you quickly learn to be flexible in how you approach any given “run” at a dungeon in a Mystery Dungeon. You can’t ever be sure that you’ll find enough health items, powerful weapons, and so on to cope with the escalating threats, so you’ll start learning how to be creative with what you do have, and these games tend to be more strategic than they first appear as a result. You’ll remember your favourite runs, where you somehow manage to make progress against overwhelming odds, or escape a particularly disastrous dungeon floor, and that’s emergent narrative enough (I hate that term with a passion, but it fits here). There’s no need to layer a “story” on top of that, especially when the the writers are trying too hard with the characters, too frequently, to be funny. And largely falling flat. I didn’t expect that to be fixed in the “reloaded” version of Genso Wanderer, of course, but it only too me an hour to remember that I’m going to have to wade through so much of that in between the dungeon crawling bits. 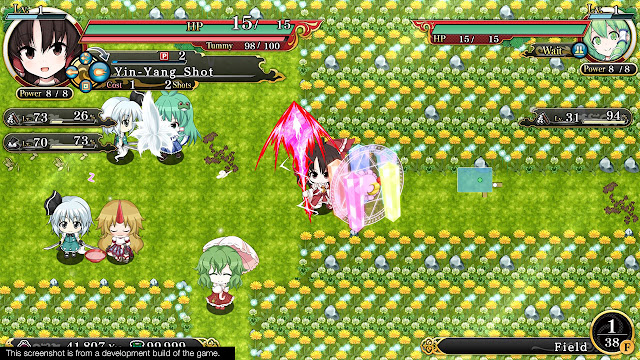 Thankfully, those dungeon crawling bits are a genuine joy. Environments are colourful, characters and enemies are adorable, and the levels themselves are large enough without becoming unwieldy. Of course, there’s no “level design” because it’s all randomised, but the randomisation doesn’t lead to any weird quirks that make progress impossible or unpleasant. The difficuly level spikes just as much as you’d hope for from a Roguelike to ensure that while you’ll slowly make progress, you will be “dying” and awful lot along the way, and each death does mean a return to the very start of level 1.

The grind is par for the course with a dungeon crawler, but, as I mentioned before, the game moves at a brisk pace that it’s never that hard to restart, and after each restart it doesn’t take long to get stuck into the flow, to the point that you’re flying through the levels without really registering how far in you are. This is, however, very much a game for the roguelike faithful, and as befitting the spirit of the Touhou franchise, it doesn’t always come across as the most professional of projects. The interface is an absolute mess, filled with information that all-but demands that you’re an existing fan of Roguelikes to interpret, and too much of the gameplay also assumes prior knowledge.

But if you are a roguelike fan, then this is a lovely, charming, colourful and traditional take on the genre, and it’s the first really good example of that on the Nintendo Switch to date. For that reason alone it’s the superior version of one of the more fundamentally enjoyable roguelikes I’ve played in quite a few years now.

Koei Tecmo has announced Nelke & the Legendary Alchemists: Ateliers of the New World in the west