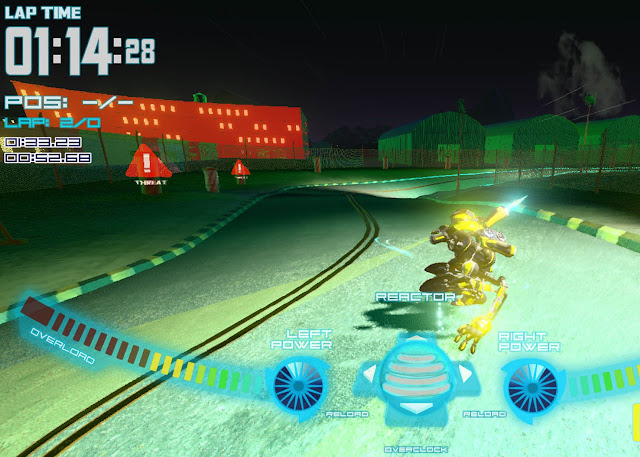 I genuinely feel bad reviewing this game – it embodies everything I love about the indie development scene: it’s a re-imagining of a well-known genre with imaginative mechanics that feels different to anything else you might play. It’s an uncompromised vision as well, featuring some excellent gameplay elements that make it feel unique and fresh, made by a little known developer with bright ideas for its first work. If you’ve grown exhausted of all racing games feeling kind of the same, TurbOT tries to shake things up. Unfortunately, in its current build it doesn’t quite work, and thus the experience is nowhere near as good as it deserves to be.

The premise is that you’re a participant in a robot racing league, where you build AI programs to go fast in simulated locations. Robot racing is a huge sport with tons of spectators and prize money, so you’re naturally looking to be the very best in order to earn that sweet digital glory. Robots race by running and yet they control very much like cars do – they accelerate with a heft and turn slowly, and feel like they’re affected by inertia too. At its core, TurbOT draws huge amounts of inspiration from retro-racing games like Daytona, relying on its arcade sensibilities and the intrinsic fun of simulated speed.

TurbOT’s strongest mechanic is its drift function, which adds a deep layer of strategy and planning to the race. You have left and right sub-engines which can be charged with power while you race, and this energy is what allows you to powerslide through corners. The sliding is tuned to absolute perfection, and it feels exhilarating to rocket through tight corners at full speed. Players will need to manage their energy levels while racing, as they won’t be able to constantly charge lest they overload their engine and temporarily disable their powerslides. It adds a level of active resource management to a tried-and-true racing formula which gives the game a unique sense of identity. 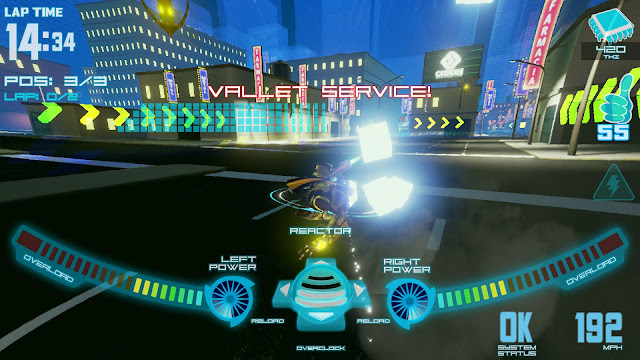 The problem is that these mechanics together require a complicated control system, and most keyboards have a 3-roll mechanism which means you can’t press more than three keys (or sometimes four) at the same time. Unfortunately for TurbOT, you’ll often want to be accelerating, charging and turning your robot, and in quick succession you’ll overload your keyboard and render the controls useless for a brief moment. It’s always terrifying to approach a corner at breakneck speed and hit the drift key, only for it to not do anything.

TurbOT also has controller support which fares mildly better – you can steer and charge your drift to your heart’s content now, but for some reason charging is mapped to the D-Pad while steering is mapped to the left stick. If you want to do both at the same time, you’ll need to adopt the dreaded claw manoeuvre that anyone who played the PSP Monster Hunter games would be well acquainted with – you’ll need to have your index finger on the D-pad and your thumb on the joystick while you try to stabilise your grip with your other three fingers. I would be more forgiving if this was the only control scheme available, but most controllers nowadays have both shoulder bumpers and triggers – the image in the game’s tutorial even has arrows pointing to the bumpers to tell the player that they don’t do anything.

These suboptimal control schemes only exacerbate problems with course design and collision detection, which together make the game near unplayable. The first course is simple enough, but the second takes place in a sprawling city where you can take a myriad of sidestreets and alleyways as long as you find the checkpoints before completing a lap. The waypoint indicators are messy and confusing, and I ran three laps around the city before realising that I’d made no progress in the race because I hadn’t found the checkpoint gates along the way. 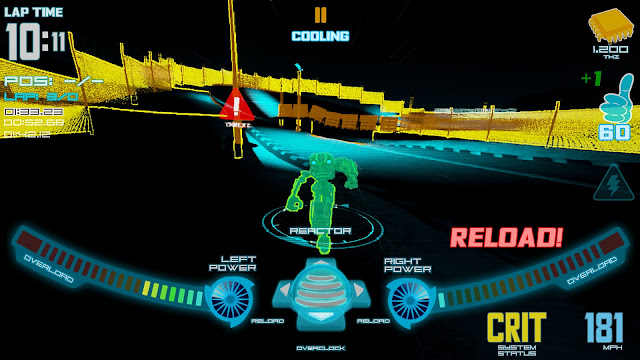 Collisions also tend to break the game. Hitting a wall head on is a near death sentence since there’s no way to reverse in this game, you just need to keep accelerating and turning until you’re free from your wall-ramming fate and that can take up to 15 seconds. Courses are also scattered with obstacles to ruin your day, and if you take too much damage you’ll need to reset back onto the course. Both of these situations will leave your current race all but forfeit. Sometimes the end race button also glitches out and doesn’t take you out of the race, leaving you stuck unless you force-quit the program entirely.

After each race, if you muster the patience to complete it, you’ll earn some money to upgrade your robot and some fans which unlock your progression to the harder races in the game. I never managed to earn any money because you’re penalised for crashing into stuff and causing property damage, in my first few attempts I would earn $50 of prize money for completing a race before losing $2600. I felt that the robots were plenty fast (almost uncontrollably so) without any upgrades so I didn’t see much purpose in that, and I was glad that with enough determination you could unlock later races without needing to win the early ones. There aren’t a lot of different tracks but because the game’s mechanics are a bit deeper than the average racer, it will take a while to figure out which routes are best and where to charge and conserve energy.

Ultimately, TurbOT is a game with interesting ideas held down by very poor execution. When the game works, it’s a lot of fun, letting players slide through complex tracks with ease. Unfortunately, the game only works when it’s being played perfectly – the player needs to know exactly where the turns are, never crash into anything and get used to one of two unwieldy control schemes. With some polish, there’s a good game here, but a slew of technical issues prevent it from being anything more than a frustration for now.