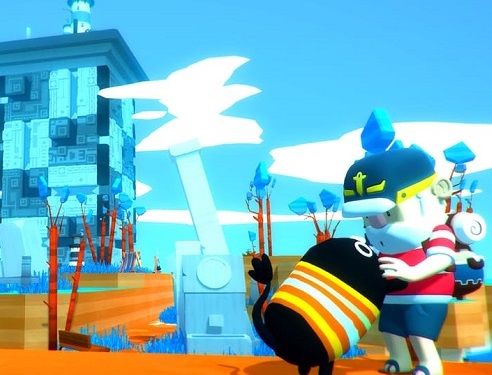 You might be easily fooled into thinking a game looking like Solo would draw inspiration from Wind Waker, but Team Gotham’s narrative puzzler has much more up its sleeve. Promising to take players on an introspective journey to find the meaning of love, the game pulls no punches with deep discussions of relationships, loneliness and identity, all while maintaining a peaceful and atmospheric tone. It’s an experience quite unlike anything else in its genre and nestles comfortably in your headspace to tell its quiet and contemplative story.

The game first draws you in with its art style – a wash of bright blues, greens and yellows conveying a pure, natural world. The cartoon protagonist and deformed critters populating the world suggests no hint of menace anywhere, and the player is free to let their thoughts roam as a result. The excellent presentation is backed with a gorgeous soundtrack which is wistful and emotive, complementing the game’s thoughtful tone at every step.

Solo’s introspective side shows through its pertinent writing and skillful questioning of the player. Across the game’s many levels you’ll be asked to give your opinion on love, what you think it is, and whether you think you have found it in its pure form. The game will also challenge you on your answers: it asks you to name the representation it gives to your loved one, and he or she will converse with you about your decisions. It’s particularly heartbreaking to have your partner ask if they are not good enough for you, if you answer that you’re not sure what love is yet – the first time I saw that outcome I had to stop for a bit and come back later.


The game is full of little moments like that which aren’t big and surprising and yet catch you unawares all the same. The writing shows a distinct humanity which understands the fears and anxieties which everyone is likely to have whether they’ve just entered a relationship, been happily committed for decades or have yet to find someone to love. These questions would be excruciatingly difficult to answer in any other scenario but in Solo, the delightful artwork and peaceful mood conjure honest answers out of you.

I find that the puzzle gameplay which is present is done to break up the questioning and give the player time to mull over their decisions. Puzzles are mostly about moving and stacking blocks in order to reach high up locations. The player gets a parachute so that they can traverse gaps and a magic wand which allows them to grab and reposition boxes to their whim. Despite the simple mechanics, Team Gotham manage to produce some clever puzzles, particularly later in the game in the optional segments. The developers also embrace a more open-ended nature, often giving the player more tools than they need to solve the problem at hand and allowing for multiple valid solutions whenever possible.

Later puzzles will introduce more complex blocks that behave in specific ways, and the player is always tasked with experimenting to find out how to get from Point A to Point B. Out of all the puzzles, I only found the last two to be quite hard, and by that time the end goal was well in reach and I was determined to see what the game had left in store for me. There were a few in the middle chapters of the game which dragged on even after I had worked out a solution, however. I did feel that perhaps a skip level button, or even just a hint system might have been helpful, though determined players should be able to figure out the solutions without much trouble. 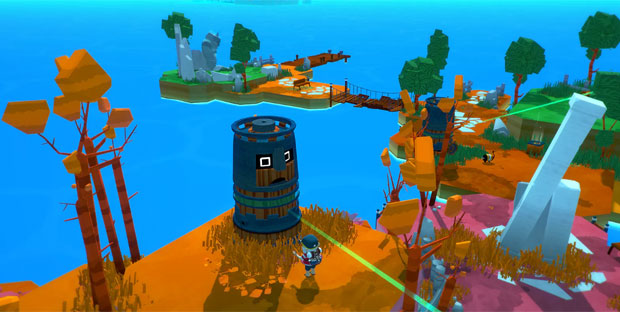 If there is any similarity to Zelda, it’s in the small details which makes the world feel alive, and which reward the player for experimenting. You’re able to pull out your guitar and play at any time, and there are certain songs which will affect the world around you in novel ways. You can also solve small puzzles to befriend wildlife, irrigate flowers and find notes scattered around the world, and it’s the sentiment that a puzzle is its own reward which led to the comparison with Nintendo’s franchise.

Ultimately though, my mind kept being drawn back to the questions the game asked of me. I realised that at many times I was unsure of my views on love, and I eventually looked back to find that the instinctive answers I gave to some questions belied problematic ways of thinking about myself and others. Not to say that the game intends to be confrontational, but I was surprised how much of an honest reaction I got from Solo compared to the many other narrative-focused games I had played before. Of those, very few make me doubt myself, and even less make me yearn to grow my experiences, and yet Solo managed to do so effortlessly.

I’m really glad that a game like Solo can exist – I can easily imagine the many different walks of people who would appreciate the opportunity to be open and honest about their understanding of love. By building upon universal human experiences, Team Gotham have created a poignant game which distills romance without being sappy, compassion without ulterior motive and self-reflection without the fear of others’ expectations. Perhaps it’s not the most exciting or enjoyable of games, but I’m sure Solo will find a core audience which will appreciate it for what it does best.