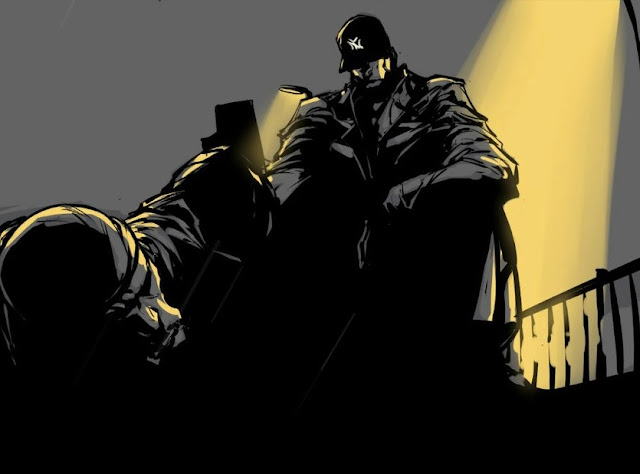 Metropolis: Lux Obscura is what happens when a game developer really likes Sin City, and decides to copy it, without really understanding why Sin City – or the broader noir genre – is so good. It does manage to get every common noir element into it, including the heavily morally-conflicted protagonist, femme fatales, and the high contrast black-and-white aesthetic that is metaphoric for a dark underbelly in society. So it’s all there, but in applying these elements without the slightest hint of genuine understanding of noir, all that’s left is a grotesque pastiche of the genre.

And perhaps the developers were aiming for “grotesque.” This is a game that proudly lists “sexism” as a feature and turns “mental illnesses and bad habits” into level-up unlocks. If I was actively looking to make something grotesque, those might have been go-tos I went to, too. Perhaps this is a game that is such a derivative pastiche of noir because the developers wanted to be so critical of the genre and expose its flaws as a genre. That’s what I might argue in the game’s defence if there was a sense of self-reflectivity within Metropolis. If there an awareness within the game itself, of the broader genre. But there’s none of that, and the developers couldn’t even manage to make the gameplay – simple match-3 puzzling – interesting. So rather than try and see the game as a postmodernist deconstruction, I’m instead going to go with the assumption that the team behind the game are simply talentless fans of Sin City and who have no understanding of any of the structural or textual functions of noir.

It looks the part, and that’s what kills me. I love noir. I took dedicated courses on the specific noir genre back when I was studying film at university. I’ve seen all of Humphrey Bogart’s noir thrillers a dozen times (if not more), read all of Raymond Chandler’s books multiple times, and while the genre’s one that has been on the wane for decades (principally because the societal context that underpinned the noir genre is simply not there any longer), those rare times a modern classic in the genre pops up, like Chinatown (gasp! Yes, I praised a Polanski film), Se7en, L.A Confidential, or Sin City, take a real pride of place in my film library. 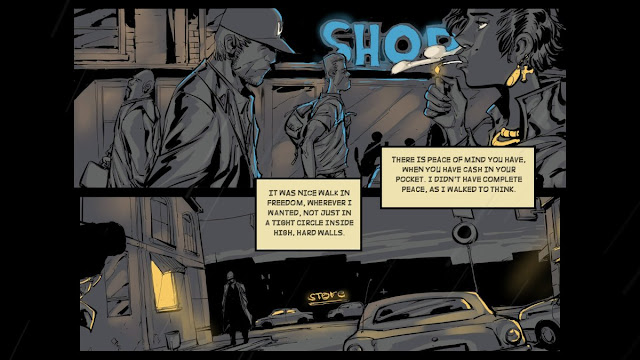 So when I saw the art of Metropolis in isolation, I was immediately keen on it. Right from the start the attempts to use colour as a highlight, much as Sin City uses rare bits of colour to draw focus to a particular object, seemed a little contrived, but otherwise, the heavily contrasted comic book aesthetic is vintage noir.

But then I started playing the game, and everything fell to bits.

I’ll start with the gameplay, since that’s the bit that’s most indicative of how broken this game is to people who aren’t familiar enough with noir to see how brutally poor the game’s treatment of the genre is. Metropolis is a simple match-3 puzzler. Throughout the adventure, the protagonist gets himself into fights with other people (and occasionally odder things), and when this happens, the game shifts to a standard match-3 play field, where each “match” will damage the enemy. After a couple of “turns” (it varies from enemy to enemy), they’ll attack back, only instead of matching up tiles themselves, they just do damage. So, essentially, it’s a time limit; defeat the enemy by playing bog-standard match-3 before you run out of turns (i.e. the enemy takes enough turns that your character runs out of health). 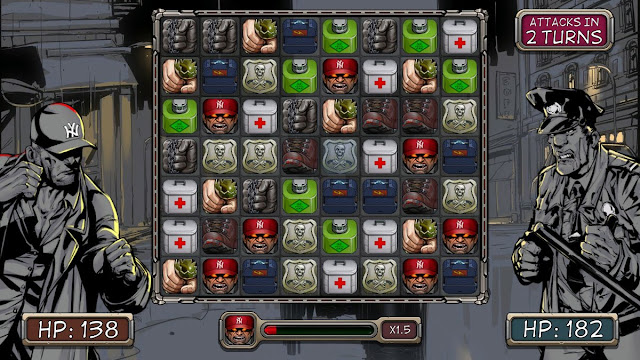 There’s a couple of things that can modify results; you can match up medical kits to restore your health, for example. And there are “police” icons on the play field that do additional damage. And, with every victory, you get to pick one “power up” (and in a classy touch, those power ups are actually “mental illnesses” – read the sarcasm there when I say that’s ‘classy’). These power ups give the protagonist additional health, a chance to do extra damage when matching specific icons, and so on.

Metropolis’ developers would have you believe that this power-up system makes the game a RPG, but anyone going in expecting the game to be like Puzzle Quest or other quality puzzle/ RPG hybrids will be sorely disappointed. It’s far, far too shallow for that. And because it is so shallow, success in levels relies far too heavily on a friendly play field. On numerous occasions I’d struggle mightily to defeat an enemy on the first attempt, only to knock them over in as few as two or three moves on the second attempt, because the second time around the playfield gave me a nice cluster of icons to link together to do a massive attack immediately.

We’ve all played match-3 games by now, and I really do mean everyone. Whether you’re deep into video games, or someone who busts out a phone when they have five minutes idle, you, and I, and we have all played Candy Crush, or Bejewelled, Puzzle & Dragons, or any of the more creative takes on the genre (Zuma!). So if Metropolis’ gameplay isn’t enough to compete with those other games (and it’s not. Candy Crush offers greater complexity, challenge, and variety, let alone a quality match-3 you pay for), then it needed to be the narrative and story that get it over the line. And as I’ve already outlined, it’s trash. 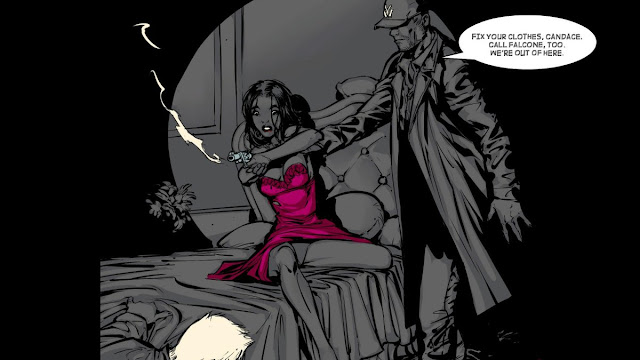 The game goes overboard on the hardboiled, and again it’s like the team working on the game loved Sin City so much that the writers just copied the tone wholesale without really understanding the nuances of Sin City. And as bombastic as that film is, there’s also a lot of nuance, particularly in the writing, that both calls back to, and subtly reworks the genre greats of the Bogart era. Strip that nuance out, as the developers have done here, and we’re left with morally-conflicted characters, which you’d expect from the noir genre, that are so impossibly unlikable that it’s impossible to care what happens to them. And that is very poor noir.

Then the game decides to throw in moments of utter stupidity, that I think are meant to pass as humour. Walking down the street, our protagonist runs into an Elvis impersonator (voiced by a really bad Elvis impersonator), that has a hidden blade in the neck of his guitar. If that scene wasn’t there to make me laugh then I don’t know why it was there, since it adds nothing to the overall plot. But, worse, if it was meant to be funny, I sure as heck wasn’t laughing.

And then there’s the game’s understanding of the femme fatale. The pinnacle of the noir genre. Oh Lord what did they do in this game? Every woman in Metropolis is an object to be groped or outright sexually assaulted (because they’re strippers and sex workers), and/or protected by the reluctant male protagonist, who’s going to get his way with her later on anyway. The developers were right – sexism most definitely is a feature in Metropolis, and its presented in such a grotesque and leering manner that the developers have missed the mark on the femme fatales completely. Those seductive, sharp-witted, and ultimately empowered woman that actually characterises the genre has been replaced by characterisation drawn from bad porn films. 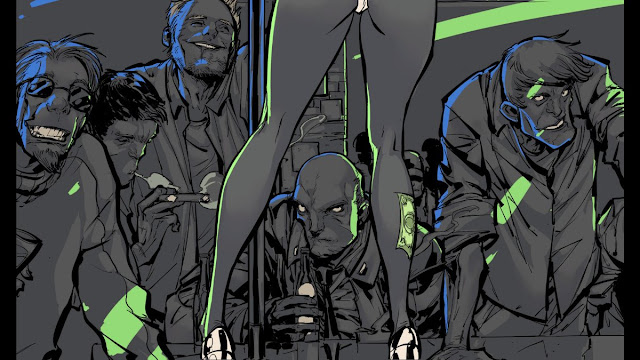 Even putting aside the actual pride the developers seem to have in the grotesque imagery, the insult done to the genre itself is irritating; unless you’re producing a satire, or something self-reflective (and we’ve already established that this game is neither funny nor reflective), then have some respect for the material that you’re working with.

Even if you don’t care about the poor storytelling and juvenile understanding of the noir genre, Metropolis is still a supremely bland and uninteresting match-3 game; one that doesn’t integrate the gameplay and narrative together in a particularly interesting way and yet somehow also wants people to play it four times to experience all the endings. That there is a severe over-estimation of just how interesting players will find the game, and perhaps the best symbol for how uncomprehendingly deluded the entire project is.

Hatsune Miku and SEGA: Are the good times fading?