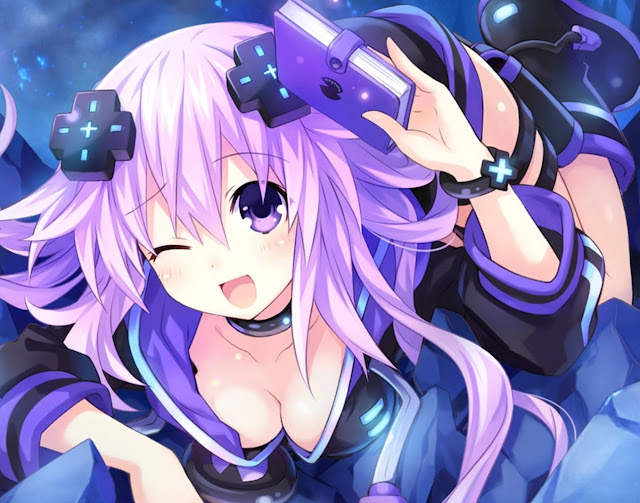 The only bit I got right in my assumptions was the VR bits were indeed tacked on. It almost seems like this game was seen by Compile Heart as an excuse to trial a new approach to the Hyperdimension series, using the VR stuff as the “in” that would allow it to revisit an existing narrative, rather than go to all the effort of writing a new one. And if that’s so, I’ve come away more convinced than ever that this franchise is blossoming into something better than those outside of its core fan base will ever care to admit.

And they really won’t ever admit these games are good, because no matter how well they play, they are still heavy on the fan service. With the way certain corners of the industry behave you’d think the world would spontaneously combust if any of them admitted a game with some upskirts, striped panties and risqué humour was good. So that’s where Megadimension Neptunia VIIR finds itself; a game that plays every bit as well as any beloved JRPG out there, and will be instantly dismissed because the girls skirts aren’t measured to an inch below the knees. 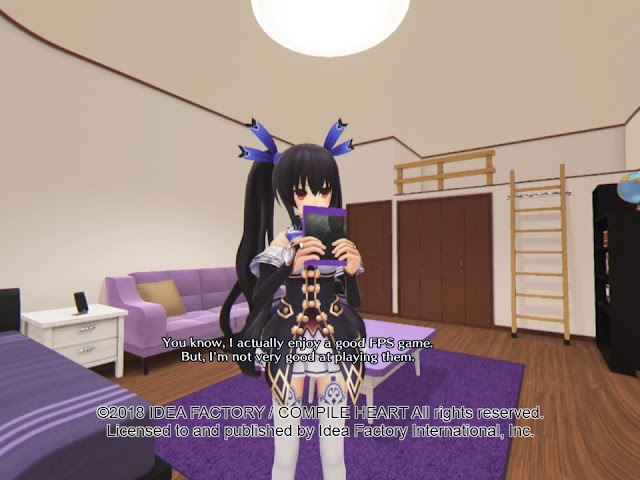 I’ve already covered a lot of the narrative context of this game in my previous review of Megadimension Neptunia VII, which is nice for me, because it saves me from having to do it again (just read my previous review). The base plot is the same, and kicks off with Neptune and Nepgear getting sucked into an alternate dimension that is facing an apocalypse, and yet somehow things manage to take a turn for the even more extreme from there, as old enemies and friends show up in ever more ridiculous ways. If you’re looking for an example of what self-aware, fourth wall-breaking humour looks like, you can’t really go wrong with this game and franchise.

What is new, however, are the VR scenes, which can be played with or without a VR headset (so, yes, you don’t actually need the PlayStation 4 VR unit to play). In these scenes one of the girls will show up in a bedroom which is meant to represent the room that you, the player, are sitting in. There they take the opportunity to have a good heart-to-heart with you (oddly, not about events going on in Megadimension Neptunia itself), before disappearing off to where they came from and leaving you, presumably, reaching for the tissues.

I jest, I jest. I’m actually surprised at how restrained those scenes were for the most part. To the point where I started to get worried that Compile Heart was actually in danger of taking it all far too seriously. Aside from the fact the girls all wear super short skirts, which doesn’t work to their benefit when they sit down opposite you (or bend over to pick something up), there’s something oddly earnest about what Compile Heart seems to be trying to do with these scenes. In fact, in the overwhelming majority of cases, these scenes are designed in such a way that even when a girl is leaning over or sitting down, they do so in such a way that preserves their modesty. Which is fine, of course. Just, given the track record of the series, surprisingly timid. It’s like Compile Heart is trying to establish the girls as something more thoughtful than the nonsense caricatures of pure fan service that they once were. That’s not to say these scenes are serious in tone either, but rather surprisingly modest, restrained, and earnest in character building. 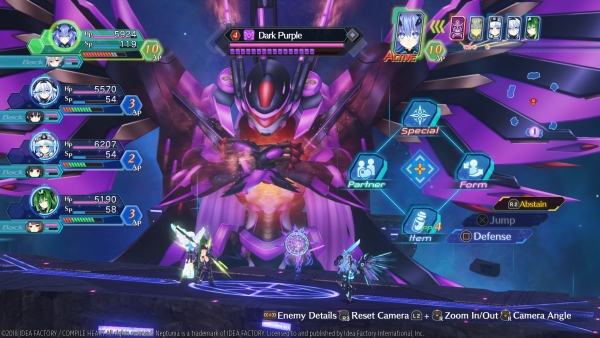 It’s worth noting that though you can play Megadimension Neptunia VIIR’s VR scenes without a headset, if you do have one, don’t skip the opportunity to use it. It is a pain constantly putting it on and off (because the base game itself doesn’t support VR at all, and therefore game regularly switches between VR and no VR), but it’s worth it. Compile Heart’s done a really excellent job of rendering these characters in VR for the first time, and while I might have preferred a full game featuring them (a remaster of Producing Perfection, perhaps), or just being able to interact with them in any way beyond occasionally nodding my head in agreement or shaking my head in disagreement, this is a good start for the company and its VR efforts.

As I wrote earlier, the base game has also been substantially upgraded on what the original offered. It’s still a turn-based combat system that takes place in arenas that you have the ability to move your characters around to strategically position them. Combat is so smooth and streamlined now; characters heal between battles, so buying dozens of excess healing potions just to get through is no longer necessary. Strategically placing characters around the battle area allows you to create “links” which can deal out massive damage via special attacks, incentivising you to really make good use of the battlefield. There are changes to how special attacks are earned and used, combos and special attacks all make sense and, finally, Compile Heart has managed to get players into the game without drowning them in unending tutorial screens that you need a degree in JRPGs to understand in the first place. Oh, and an aggressive auto-save also means that save points are a thing of the past and should you ever be wiped out, you won’t lose much progress because you’ve accidentally forgotten to save.

This is just a fraction of what’s been done to the game, and while much of Megadimension will be familiar to returning players (mostly because the enemies remain as ridiculous as ever, and the plot hasn’t changed), there’s not a single part of the actual gameplay that hasn’t been improved substantially, to the point that it feels like a complete overhaul. Truly, if you’re able to put the series’ reputation aside and overcome the surrealism of fighting enemies that are often actual screenshots or Mario Bros. – style pipes, then you’ll probably find yourself genuinely surprised at how proficient and enjoyable the combat system is. 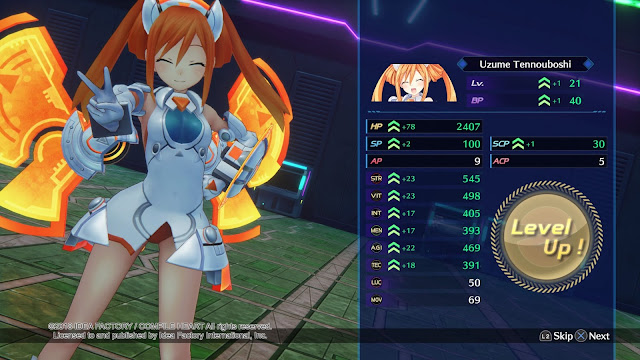 That’s not to say it’s perfect. Most critically, it is a little too easy now. There are prolonged boss battles where you get to fight absolutely giant monstrosities well beyond the size of a standard screen, and slowly get to chip away at their health, but even then, the threat posed by those enemies to your characters (assuming you’ve been reasonably diligent in fighting the common enemies along the way) is nothing that can’t be very easily managed by keeping a good stock of healing items on board. Regular enemies are barely a diversion. And, it is worth noting, that there are a few skills that characters can learn that are immediately obvious as near-broken to anyone with even a basic understanding of JRPGs, in that they are so poorly balanced that you’ll want to put a soft ban on yourself from using them in order to preserve some sense of challenge.

If Megadimension Neptunia VIIR really is an experiment to establish the new gameplay structures for future titles in the series, my feedback to Compile Heart would be to lessen the rate of enemy encounters and really ramp up their difficulty. See, traditionally in JRPGs enemies between boss battles were attritional forces. Each battle would chip away a little health, or make you use some potions, or cast some magic. It was never enough to be a credible threat in itself, but over the course of an entire dungeon, it would be just enough to add to the threat posed by the boss at the end, because you were less likely to go in with the full weight of your resources available to you.

In Megadimension Neptunia VIIR, however, enemies can’t chip away at your squad’s health, because it returns to full after every battle. So frequent battling becomes pointless. Instead, it would have made sense to have fewer battles, but more purpose to each of them, so that each battle would threaten defeat for the unwary players. Increase the experience earned from battles in kind, so that the experience curve remains the same, but get rid of the mindless grind. 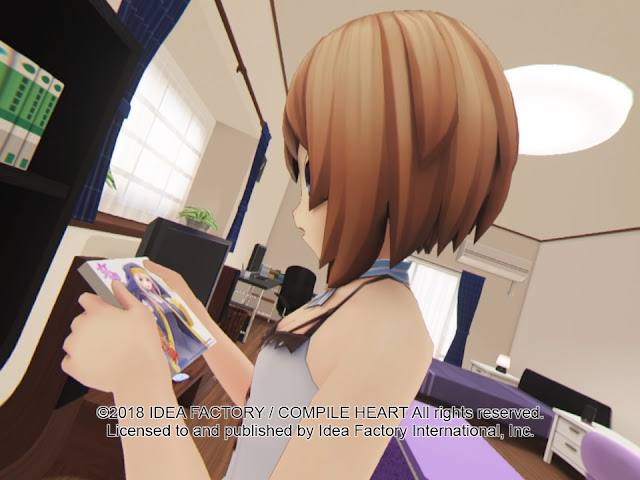 With that being said, I never got sick of the battles in Megadimension Neptunia VIIR. Part of it is because the battles are so visually impressive, from the effects of special attacks through to those monster designs, and the other part of it is all those changes that have made the game so eminently playable, that, as easy as it all was, it was always enjoyable. The third part of it, of course, is that I’m so in love with the satirical storytelling of the Hyperdimension Neptunia series, and so firmly invested in the characters (especially now that I know them in VR), that, to use Neptune’s own turn of phrase “I don’t sweat the small stuff.”

It would be nice to see the Hyperdimension franchise start to find a new audience beyond those who are already enamoured with the satire and fan service. Sadly, I don’t think that will happen, no matter how well the game plays. Megadimension Neptunia VIIR is an odd duck, being sold heavily on the VR features, even though they are so overtly tacked-on, but whatever the development story behind that, Compile Heart has gone back and substantially improved the gameplay engine, to the point that this is genuinely one of the better JRPGs out there. Making it all the more pity that a lot of people won’t see past the low budget these games are made on, and their love of underwear.