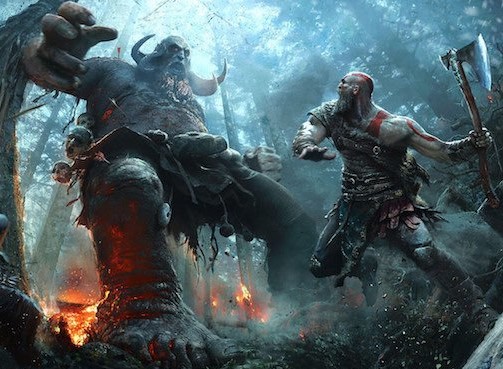 But that’s completely okay. It’s good, even. It’s okay for a game to be pure-blooded, dumb-as-a-lobotomised-chimpanzee, visceral fun. It’s okay for a game to be a blockbuster. Having now finished the game myself, I happen to completely agree with Brad’s review on DDNet that it’s one heck of a wild ride, and almost impossible to put down. In fact, I’d go as far as to say that God of War is the best blockbuster game in many, many years.

While it’s a word thrown around a little too frequently to mean “best thing ever” by hyperbolic and over-enthusiastic people ten minutes after playing a game, the general consensus among people that care about the meaning of words is that “masterpiece” should refer to something a bit more substantial than that. Broadly speaking, it’s meant to be not just a rollicking good time, but also a work of great profundity. Something that will be remembered – and studied – into the ages. Of course, it’s difficult to really understand whether something will be held up and lauded to the same extent as a work by Shakespeare or Austin, Eisenstein or Kubrick, when it’s only been on the market for a weekend, but at the same time there are certainly markers that we can look out for.

No masterpiece, ever, has been shallow, for example. “Shallow” doesn’t mean “lazy” or “poor,” but if rather, “shallow” as in lacking in the stuff that people tend to groan about when they’re asked to study Shakespeare or Austin, Eisenstein or Kubrick. The layers of metaphor, the symbolism, motifs and thematic depth, the subtexts and contexts; all these really drive a masterpiece to give it that extra power such that it transcends being something pleasurable to experience, to become something that has a broader social and cultural value. It’s that value that makes it a masterpiece.

I don’t see God of War as offering that, beyond being the latest in the conveyor belt that prove just how hyper-real a game can look, and how visceral gameplay can be. But beyond the incredible effort that has gone into the technical elements, God of War is a very simple game that takes very few creative risks. God of War tells a very popcorn-friendly, and ultimately safe story. It’s easy to understand, easy to follow, and it was easy for the developers to push out of the way every time it was time to up the action. And it was cleverly written to pull some emotional strings, and cleverly cast and performed such that it’s impossible to actually find flaws with it. Hence the Metacritic rating of 101 per cent or thereabouts.

So, again, this is not criticism. Quite the opposite. It’s a big compliment to give to a blockbuster game to say that when the economics and value of the game is tied up in it being massively popular, that it is successful in not offending anyone, while also being emotionally engaging just about everyone.

But beyond offering a solid slice of research into Norse mythology (to the point where I even believe that the developers actually went one or two steps beyond Wikipedia), what, exactly, is the depth in God of War? You want a crushingly potent and deep story about father and son, you look at something like Bicycle Thieves and the discussion that is has regarding morality in post-war Italy. Or the haunting power of The Road (the book. The film was amazing in its own right, but that book…). In comparison to texts like these, God of War is a slick package of relatable parent-child dynamics and is highly enjoyable, but it’s not the most insightful narrative. And this is the game’s sole driving point.

And again (I feel like I need to clarify this again, because I just know some will take it the wrong way); I am by no means suggesting that God of War’s narrative is poor, or that the game is inferior. It is everything that the developers wanted to deliver; a roller coaster of action and adventure, a new vision for Kratos, and an enjoyable relationship dynamic between father and son. It’s as technically brilliant as any other game currently out there. It’ll be superseded eventually, but for now God of War is what happens when a development project is intelligently managed and the budget spent wisely. This is what the developer wanted to deliver. That the team had done so with such masterful precision is not something to be critical of.

But will it have the longevity and cultural relevance of Citizen Kane, Tolkien, the Mona Lisa? No. Not really. I’m fairly confident, sitting here right now, making the prediction that God of War won’t be a major subject of study within the context of game development or storytelling ten years down the track, much less a hundred. There are games out there right now that will enjoy that kind of permanency, but it won’t include God of War. To find those games, you’ll need to look below the major blockbusters, and indeed that’s where most masterpieces end up coming from in all creative mediums. In a lot (if not most) cases, the “masterpieces” that we laud today tended not to be the major commercial successes of their time, because they tended to be risky or polarising projects, and you don’t tend to make money from people who don’t like your stuff.

All of this brings me to another, related point, and this goes for entertainment industries in general. Over the weekend, James Cameron (the guy that made Avatar and Titanic, Aliens and Terminator), was out there being quoted about how he wished that people would get over the Marvel films because, and I quote “there are other stories to be told.” Never mind that Cameron himself is busy producing Avatar sequels and therefore not going to be telling these “different stories” himself, and putting aside that obvious issue in his musings there, what the hell does Cameron think is made outside of Hollywood? The independent films and the “foreign films”?

(God I hate that term. Why is it “foreign” if they’re not speaking English? Hey-ho western imperialism!).

Over and over and over again, in all media but especially with regards to film and games, there’s a propensity to forget that everything that isn’t ridiculously expensive to make doesn’t exist. The PlayStation Vita “had no games” because Activision and EA basically ignored it. Any month where a “TRIPLE A” game isn’t release is a month where people complain about “no releases” and how bored they are. Because Hollywood’s exclusive interest is in churning out comic book films there are, apparently, no other stories being told outside of comic book films.

Even if we give these people the benefit of the doubt and say that they know about the existence of mid-tier, independent and foreign games or films or whatever, it’s still hard to see them as anything but a bunch of oxygen-starved baboons. Because then the strong implication is that they believe that if it’s not AAA, its somehow less valid as a work as the big budget game. That it can’t possibly be a masterpiece.

And yet, when you look back at what a masterpiece actually means, it’s not the baby-pool shallow story about a dad and his son rampaging across the frozen north. It’s also not about something being popular. Stuff is popular and exciting for a reason, sure, but if we’re going to talk about masterpieces, we need to broaden our criteria further than that. That’s not to say a masterpiece is inherently elevated beyond the value of what the God of Wars of our world offer. You look at the masterpieces of literature, film, music and whatever, and chances are you need to be in a very specific mood for that stuff, while you look elsewhere for something to relax with after a day of work. So it’s not so much a discussion about quality as entertainment here. But the masterpieces of literature, film, music and whatever are considered masterpieces against a criteria beyond being entertaining, and if we’re going to take this “games really are art, promise” argument seriously, the same one people still love to get passionately angry about every time Roger Ebert’s “games aren’t art” comment is brought up, even though the guy is long dead now, we need to stop and think about whether God of War really is the shining proof of everything the medium can offer.

Because if it is, we need to rethink whether we ask people to take this medium as seriously as literature and film as an art form. God of War doesn’t stretch past being entertaining, and there’s more to art than entertaining its audience. But I’d like to think that, much like with film (aside from people like James Cameron), we can draw our masterpieces in games from that space sitting beneath those wildly entertaining blockbusters.