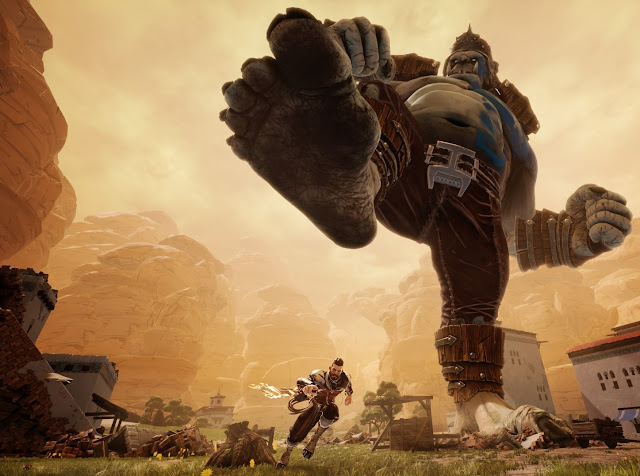 Extinction represents some of the unfortunate problems of mid-tier development: its scattered focus and cut corners lands it firmly in the good-but-not-great category, and thus it fails to either achieve the immersive spectacle of the AAA sphere, nor the affordable ingenuity of the indie space. It comes developed from new studio Modus Games with help from Iron Galaxy, the latter a studio known for everything from publishing, porting and session work for other developers, as well as a few of its own games here and there.

Extinction is a giant-slaying game akin to something like Shadow of the Colossus or Attack on Titan, and I would prefer to compare it to the latter because it feels like a lot of effort went into emulating the feel of taking down an enormous enemy. There’s also some similarities with the Monster Hunter approach to design. Unfortunately, Extinction tries to get by on passable individual mechanics while cutting corners on narrative, world-building and game feel, resulting in a finish product which is marred with blandness.

The game opens with some excellent comic-style art, reminiscent of Avatar: The Last Airbender. It introduces the audience to a world ravaged by the existence of giants called the Ravenii, a monarchical bureaucracy with no means to combat the giants and a hidden race of Sentinels who use ancient magic powers to keep the monsters at bay. The plot centres around taciturn swordsmaster Avil and his enchantress partner Xandra as they try to work together with the local authorities to save as many lives as possible. 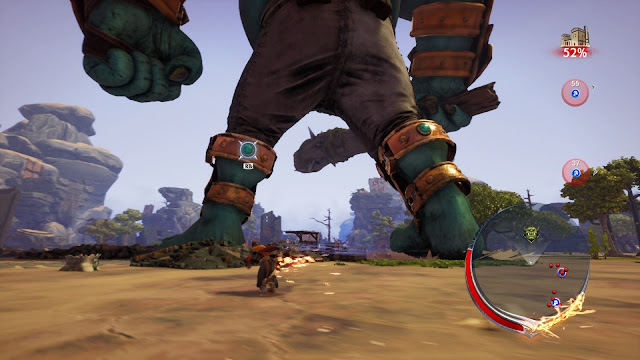 The story could have been spiced up a little with more plot twists or interesting characters, but it’s passable for what it is. The main flaw is that it’s very unspecific: for example, the Ravenii seems to be a Latin term, the town and NPC’s are more Babylonian, and the main characters are more Elvish fantasy. There’s no through-line or consistency that sucks the audience into the world or makes them interested, and the lack of cohesiveness in the plot leaves the main story missions feeling arbitrary. Modus Games has clearly sprung for high quality art assets and voice acting on nearly every line of dialogue, which is all the more tragic because so much of the dialogue is comprised of throwaway lines telling the player what to do without adding at all to the world or lore of the game. These problems are compounded by the game constantly short-changing its own story to push its gameplay loop.

On a positive note though, the mechanics do set Extinction apart from other games of its ilk. Avil plays like any third-person action game protagonist: he runs fast, jumps high, strings attack combos together effortlessly and has access to a dashing rune-slash that can sever limbs off giants. Before you can go and kill a giant you need to build up “rune energy” by dispatching little enemies called Jackals or saving civilians gathered around safety stones which are scattered around the map. If left alone, giants will smash buildings and generally make a mess, and once they’ve reduced enough infrastructure to rubble you’ll fail the level. The player needs to manage their priorities, saving civilians to build energy and killing giants as soon as they get the chance, all while preventing too much damage being done to the town. When it works, it’s a stressful situation which effectively conveys the difficulty of being a protector like Avil, and rewards players who are able to prioritise enemies and plan ahead.

Unfortunately, when the game mechanics aren’t working as intended, the narrative suffers as well. Killing jackals and defending the populace isn’t always the most efficient way to build rune energy; for the most part, you’ll want to build it by using your rune slash breaking armour off the giants and hacking off their limbs to temporarily stop them from doing damage to the town. Despite what the tutorial might make you assume, using the rune slash doesn’t cost any energy unless it’s for the kill shot. Giant Ravenii all have multiple pieces of armour which give a little energy upon being broken, and their arms and legs grow back allowing you to farm more energy off severing them over and over. In some of the harder levels I emerged victorious by letting all my civilians die to Jackal attacks and just focusing on killing the giants. 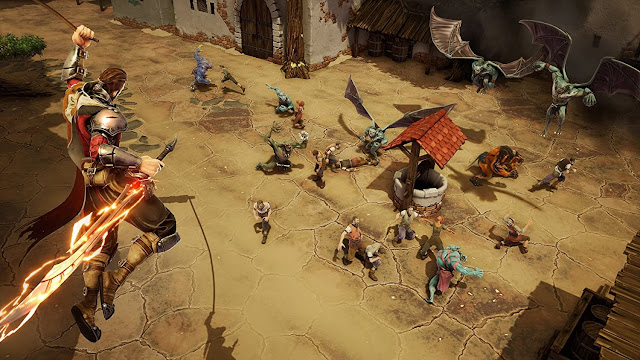 Combat also feels stiff and doesn’t compare favourably to other games of a similar genre. Avil has access to a combo system reminiscent of a beat-em-up, where hitting the square button in quick succession will keep most Jackals stunned as long as it takes for you to deliver the killing blow. Instead of light and heavy attacks mapped to different buttons however, heavy attacks are performed by waiting briefly after landing a light attack before pressing the attack button again. The player can also perform a dodge roll and can unlock the ability to launch attacks while dodge-rolling to open up more complex combo strings. It’s not an exciting or inventive system, but to make matters worse it’s only effective against small enemies like Jackals: the big enemies which most people would have bought the game to fight are only vulnerable to rune slashes. The two systems are, functionally speaking, completely disparate.

Related reading: Shadow of the Colossus is the giant monster killing game for people who want to get thinky. Our review

Fighting giants is arguably worse. They’re so big that the game’s camera can’t show their whole body on screen, and their attacks are likely to kill the player in one hit every time. While their motions are telegraphed, it almost feels like Modus Games didn’t account for how big they would be, as by the time they lift their hand in the air to telegraph a ground slam, not even your dodge roll will put you far enough away from the area of impact. Too many enemies are defeated in the exact same way: cutting off a leg so they fall over, clambering up their back, dodging their hand slap when you’re halfway up and then delivering a rune slash to the back of their neck. Compare this to a game like Monster Hunter or Toukiden, which feature inventive monsters with creative attack patterns that can be learned and internalised by the player. Ravenii, on the other hand, attack erratically without letting the player dodge, and yet fighting each one still feels like an identical affair.

Ultimately, Extinction is a game which just feels bad to play. It’s technically proficient, looks good and has everything it needs to be a functional game, but it never goes beyond that and assumes the player will be engaged just by the act of killing big monsters. I feel like the game’s shortcomings could have been rectified with some of the luxuries afforded to AAA development: more playtesting, quality-assurance and top-down management would have seen the game’s component works together in a cohesive way. In its current state, this is a game somehow less than the sum of its parts: unsure of what it wants to be, and unlikely to be appealing to any player base.