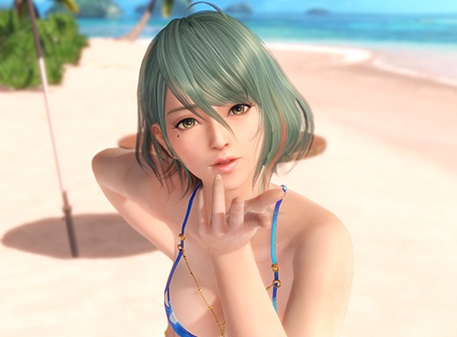 Related reading: Our review of Dead or Alive Xtreme 3

Yes, while fans of some of the other Dead or Alive women (Lei Fang, in particular) are still waiting for them to appear in Dead or Alive Xtreme, Koei Tecmo is busily producing other characters.

What’s perhaps most amusing about this though is that Koei’s new habit for Dead or Alive seems to be taking virtual idols and making “Dead or Alive”-style replicas of them in its games. Honoka, of Dead or Alive 5: Last Round fame onwards (she also appears in Xtreme 3 and Venus Vacation) is explicitly based on Love Live’s Honoka. Tamaki, meanwhile, is pretty obviously Kaede from the Idolm@ster series. It’s the hair that gives it away.

Anyhow, you can grab Venus Vacation from the DMM Game Portal in Japan. Don’t expect Tamaki to come to the PlayStation 4 version of Xtreme 3… but perhaps she’ll show up in the next “proper” Dead or Alive game, whenever that happens.