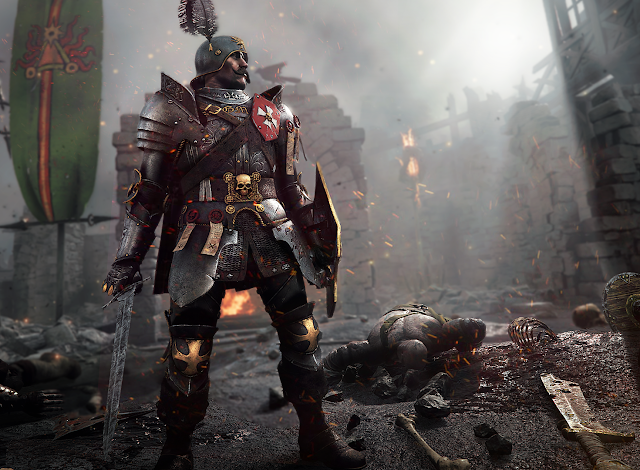 Violence in video games is a hot button topic nowadays. Whether it’s a gory decapitation or a continuous slaughterfest of screaming enemies, gratuitous murder is the order of the day for a lot of titles, both old and new. I don’t have a problem with the nature of violence, but I’m of the mind that very few games relying on violence’s extremities are better off for it. Warhammer: Vermintide II is a lucky exception in that its fantastical gore and complete disregard for a comprehensive narrative actually make it that much more entertaining.

For those who have played its predecessor, Vermintide II feels like the series has found its feet. The original was undeniably refreshing in its medieval take on the hordebreaking combat that made Left 4 Dead immensely popular, and this latest addition cranks that up to the next level. Whether it’s the chittering ratmen that want to shred your characters limb from limb or the tattooed Northmen of incomprehensible size who scream incomprehensible threats, there’s no shortage of foes who want your head on a stake. In fact, the real draw here is that you constantly feel like you’re one misstep away from said stake.

Unlike the first Vermintide title, you’re given the courtesy of a brief, but savage tutorial that explains who your compatriots are, what you’re doing, and why you’re having to embark on a murder spree across the land. You get to practice using different weapons and you’re taught the basics of survival, whether it’s healing others or using the environment to do the killing for you. The game’s cinematic introduction isn’t anything to write home about, but it does the job and gives you just enough information about your foes to encourage you to go to town on their faces with sharp objects. There’s no real justification for the slaughter, but you won’t find yourself needing it. However, the tutorial feels almost deceptively simple given the pacing of the combat that you’ll be tormented with after. 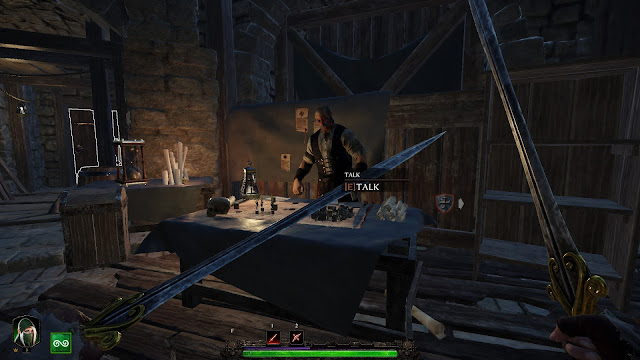 Sure, Vermintide had multiple difficulty options, but it was more than manageable on Normal difficulty. Combined with the interchangeability of the various stages in a multiplayer setting, you could jump into any mission on any map without too much struggling, even ones which seemed further along in the relatively arbitrary narrative. On the contrary, Vermintide II benefits from slightly more structure by splitting up maps into various Acts. While you can access the Acts in any order, it definitely felt like they were designed to be experienced chronologically. I learned this the hard way when I picked what was described as a fairly straightforward mission at a farm in Act 3, only to be subjected to something out of Children of the Corn.

It’s in moments like that where Vermintide II really shines. You could be enjoying some friendly banter with your mates in a beautiful field and feeling victorious after dispatching some stragglers. However, you’re only ever really a few tense seconds away from a rampaging horde of Skaven, and you’ll frequently come away from such encounters worse for wear as you get acclimatised to the variety of foes that the game throws at you. The strength of Vermintide II is not ever being able to accurately predict what sort of nightmare creature will come at you next, and the detailed environments make the abnormal look even more grotesque. You could be wandering around Victorian ruins or skulking through a field of wheat painted golden by the sunset, all to the tune of your wailing foes as you cleave limbs from bodies and incinerate the evidence.

In order to facilitate that degree of carnage without losing momentum, the levels have to be designed incredibly well. There may be a few issues with pathing into walls, getting stuck in hay bales, or being unable to hoist myself up a crucial ledge. However, there are plenty of choreographed moments and events that make player claustrophobia and frustration all part of the fun. Vermintide II takes known enemies from its predecessor and makes them twice as deadly with a crucial upgrade in AI intelligence. You’d previously have party members alert you to elite or special foes before you saw them, which would often give you time to regroup. Now, Hook Rats and Globadiers lurk on the edges when their brethrens form packs, ready to pick off anyone that breaks from the fray momentarily to regroup. 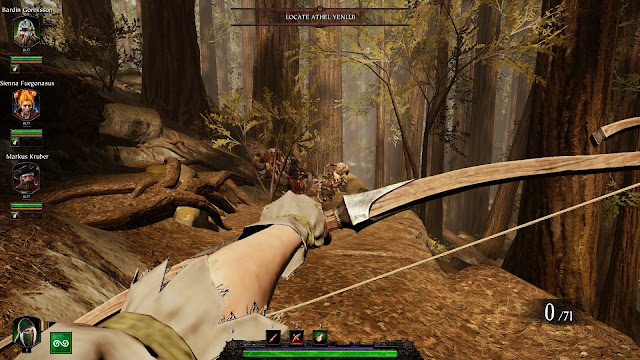 Elite enemies in particular appear with startling frequency, and the introduction of these hulking enemies at random spawn points (most often at inopportune moments) really raises the stakes. Maybe it’s bad luck or cosmic misfortune, but I often found myself staring down the toothed end of a Spawn of Chaos after I’d been backed up against a shed and was spitting out enough blood to feed a starving vampire. Another terrifying map takes place almost entirely in a darkened mine shaft, where oppressive silence is almost as daunting as facing down an angry elite mob. The magic of Vermintide II is that you’re not given any chance to get comfortable; just as soon as you think you’ve got one type of enemy figured out, you’ll find yourself facing off against something else entirely in an area of the map that was previously safe.

That being said, you’re never really going to feel helpless. The game prides itself on creating moments of incredible tension and drama, but it stops just short of making defeat feel like an endless, punishing cycle. One aspect that goes a long way in player engagement here is how distinct the player characters are from one another, and how they each have their own individual skill trees. Vermintide II utilises the same merry band of protagonists from its predecessor, and while the party dialogues are grating in their repetitiveness, party combat could never be accused of the same.

Each character has the ability to level up, and with this leveling up comes a variety of skill choices. You’re given the option of different builds for your characters, and while weapons play some part of this, Vermintide II goes whole hog and actually allows you to play a dwarven ranger as an angry ball of unstoppable chainmail instead. You can pick from different playstyles per character: my personal favourite, Sienna, can be a powerful magical sniper or a walking, talking time bomb. The key to success here is mastering the playstyle that works best for you – any build is feasible given the right stats and weapons. My only gripe is that I wish there was more clarity around the display of in-game statistics, especially when playing builds that rely on critical chance or attack speed. 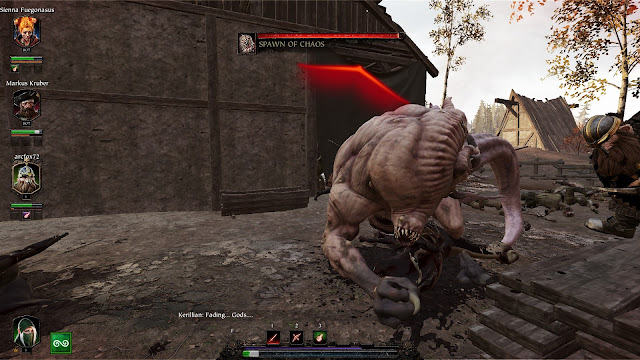 That being said, min-maxing on your own and treating this like a singleplayer game isn’t where the real meat of the game lies. Yes, it’s all very well and good to crack into Vermintide II by yourself; the AI is more than serviceable, your party members will always have your back, and it’s probably valuable to get some solo play in to familiarise yourself with the game. However, it truly comes alive when you’re in a group with other players who are just as terrified as you are. The game’s focus on character customisation with these new builds feels the most satisfying when you’re actually out there on the battlefield and being exposed to the variety of ways that different classes can be used. I rarely came away from a multiplayer skirmish without some sort of new idea or attack strategy, and nothing is truly as satisfying as being knee-deep in corpses after minutes of intense back-to-back combat with a stranger that used up all your health packs and potions.

The game has gone one step further this time by integrating itself with the largest public proponent of online play out there right now – Twitch. Those who are streaming the game in Twitch mode as they play will find themselves confronted with prompts directed at those viewing their stream. A particularly malevolent audience could make or break a party as they’re given the power to choose what sort of elites will spawn, what items to give to certain party members, and they can even choose to inflict damage over time debuffs on everyone in the group. This has already been used to much aplomb on popular streams, and the public reception so far has been good, even if it all feels a little gimmicky. Vermintide II is its own best marketing campaign, and it’s quickly capitalising on content creators to get the word out.

Vermintide II feels like a predictable step in a fantastic direction. It’s retained all of the bits of its predecessor that felt novel, and its gone the extra mile creating an ocean of foes that feel trickier and deadlier than ever before. While it suffers from some of the usual gripes that plague modern multiplayer adventures (in-game randomised loot as a compulsory progression mechanic and matchmaking troubles being the worst of them), it’s fundamentally enjoyable in its madcap approach to murder and mayhem. While you and your party members are unquestionably the arbiters of violence, you never ever feel like you’re in control of the situation. Vermintide II’s gameplay loop involves desperately clawing yourself back from the brink of annihilation each time but boy, does it feel amazing to be chewed up and spit back out.