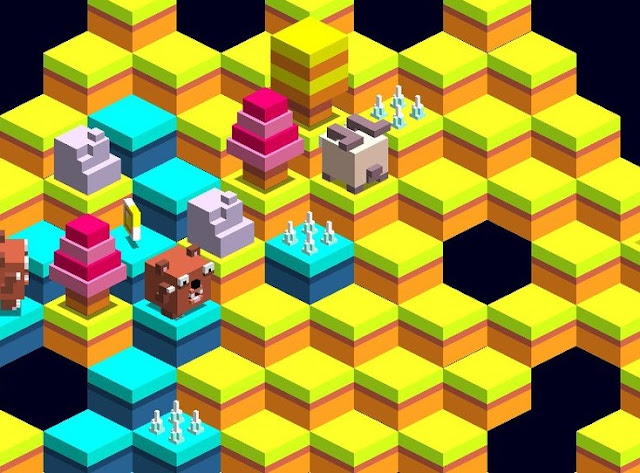 Totes The Goat is good. It’s nothing memorable, nor innovative, not particularly creative, but it’s good. It’s clean. It’s a huge sight better than that last effort to “modernise” the Q*Bert formula. Q*Bert is up there with Pac-Man and Space Invaders as my favourite classic game of all time, but unlike those franchises, poor old Q*Bert has been left to largely languish in the pages of gaming history. Totes The Goat isn’t an official Q*Bert game, but takes the same gameplay formula, throws some Crossy Road aesthetics and structure over it, and then lets people get their retro on. And it’s good. Nothing memorable. But good.

Related reading: Pac-Man 256 is another great effort to “mobile modernise” a classic. We review here.

For those who haven’t played Q*Bert before, the basic idea of that game is to bounce across an isometric playing field that has been split up into “boxes.” Each time you land on a box lid, it changes colour. Once all the boxes have had their colour changed, the level is over. Of course, levels are also filled with enemies to dodge out of the way of. One of the most amusing things about Q*Bert was when his little swear, “@!#?@!” pops up on screen. As a kid, that kind of stuff is endearing, and I’ve remained a big fan of the formula ever since.

Totes The Goat doesn’t break from that formula too much, but it does lose the swear, and as silly as that sounds, it loses a bit of personality immediately thanks to that. Random elements don’t help, either. The placement of obstacles and appearance of enemies is more randomised than in “proper” Q*Bert, and then, just to cap the “mobile modernisation” of the formula off, there’s those little coins placed around the environment to pick up as you play. Otherwise you’re doing the same basic thing level after level. Totes trades away some of the more difficult enemies (Q*Bert had all kinds of enemies that would drive you mad; including a snake that would chase you incessantly), but instead places some traps on the ground for you to avoid. These work like stationary enemies that you can bounce past if you time it right, basically. 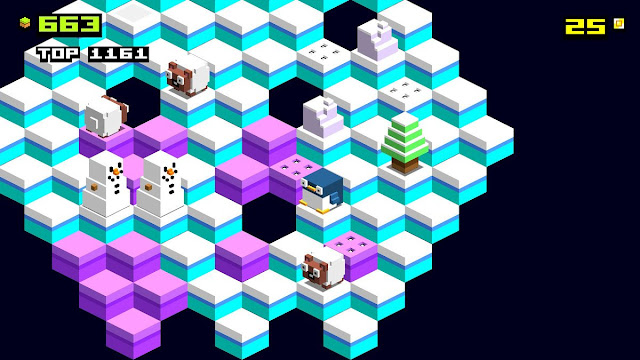 In itself it’s not a difficult game. Enemies are nowhere near as challenging as anyone who remembers this formula will remember. For the most part they stand around for a while, and then decide to jump in a random direction. You’ll generally have a split second to jump out of the way if the enemy jumps in your character’s direction, as the character will swivel on their square to face you before making the jump. The game fills up with more of these enemies, and as they’re the only real way to “die”, they will eventually get you, but there’s nothing intelligent about the way they move around the place, and the randomisation means that there’s never any design to how they appear on the level, meaning that the developer wasn’t able to use the enemies to create interesting level design either.

What does up the challenge level is the scoring system. You’re rewarded with multipliers the more boxes that you change colour in a row. If at any point you jump back to a box that you had already coloured, then the score multipliers reset. This is both a brilliant idea and maddingly irritating. It’s brilliant because it forces you to carefully plan your routes through the level in order to get a top score. It’s maddening since levels are often quite “thin” in design, meaning there isn’t much room to move, and that in turn means it’s quite easy for an incoming enemy to force you to escape to an already-visited box, ruining your multiplier run.

Still, it’s good fun to try and beat previous best scores and Totes The Goat has that “just one more go” appeal down pat. With no online leaderboards, though, the only way to really show off your best efforts is take a screenshot and share it online. I know that’s how both Crossy Road and Pac-Man 256 work, but I don’t agree with an omission of a leaderboard with those games either, and given that Totes The Goat doesn’t play as cleanly at those two games in the first place, a leaderboard would have been helpful in establishing some kind of point of difference here. 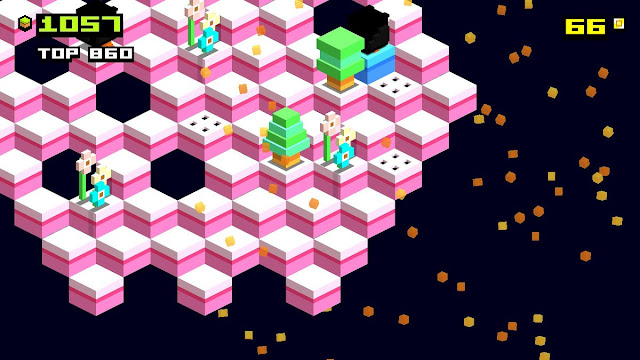 I reference Crossy Road because Totes borrows its visual aesthetic from that game. And when I say “borrowed” I do mean “all but stole it”. Characters in Totes are chunky whereas in Crossy Road they’re skinny, but otherwise they are the same ilk as 3D “pixel” figures that get around the place with an appealingly limited and stiff “bounce” action. In Totes, the chunkiness of the characters is so that those characters “stack” nearly on the boxes in the play field, but despite that slight chance in design, the end result is still a very (very) derivative looking game. And, remember, this is a very Q*bert-style game with not a hint of the orange blob-monster-hero to be seen. Coins that you earn while playing can be used to unlock additional characters, but even though this game does away with the loot box system of Crossy Road, and that’s good, I wasn’t overly excited to unlock many other characters once I had a favourite (I do love penguins), so I was right back to being left with nothing to do by try and better my score.

Totes The Goat takes one of my favourite retro games, and does a decent job of modernising it. The developer would have benefited from the actual Q*Bert license, and some creativity of their own so that the game didn’t seem like such an earnest attempt to cash in on one of the biggest and most influential mobile titles, but yes, Totes is genuine good fun, and I imagine I’ll get many months of play out of this one. For the cost of a cup of coffee, I can’t complain about that.