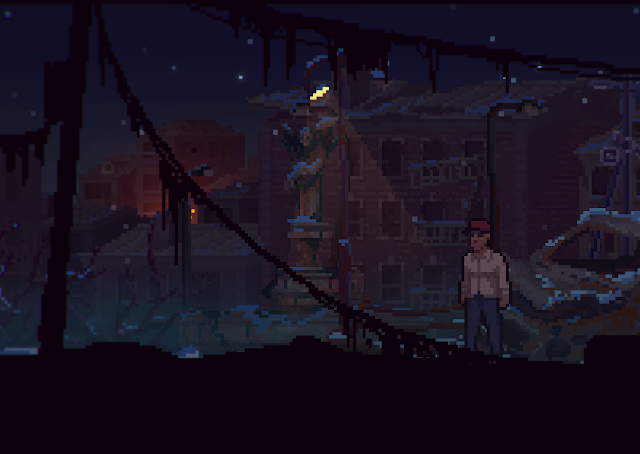 I don’t want to be too hard on Black Painted Games – it’s a four-person team from Ukraine with a love of cats that decided to push a pulpy science-horror sidescroller out into the world: there’s something so lovely and earnest about that. The game in question is The Long Reach, a tale of a psychological experiment gone wrong. Its design pulls from games like Lone Survivor and Claire: narrative driven games which proved that good sprite art and atmosphere can trump poor lighting and jump scares in the indie horror scene. The Long Reach manages to shine in some regards, but unfortunately never quite reaches the heights of the games it takes inspiration from.

The premise is that there is a malevolent signal causing people to hallucinate nightmares into real life. You must navigate a variety of locales on a 2D plane, solving puzzles and advancing forwards to solve the mystery at the core of the game. The Long Reach is a more narrative focused game, eschewing combat scenarios for dialogue trees, environmental storytelling and cinematic setpieces. I appreciated that the scariest parts of the game weren’t from jumps or outright gore (although The Long Reach has both those things), but instead from the discomforting tone set by the narrative.

This is backed up by a foreboding atmosphere built by phenomenal art and sound assets. The Long Reach has gorgeous sprite art bolstered by eye-catching lighting effects which set it apart from other games of its kind. For the first few moments the game is properly unnerving. There are also a few gimmicks to make the player doubt their own perceptions – I won’t spoil, but there are lots of blink-and-you’ll-miss-it animations, soundbites and details which ramp up the game’s paranoia factor. 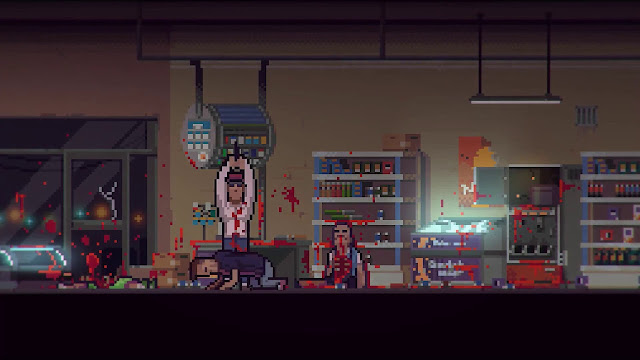 The story hits some interesting marks, hovering around a fear of corporate science and never letting the player feel entirely comfortable or safe. This is done through a swathe of plot twists which are genuinely unpredictable, as well as a dense lore that far exceeds the game’s short runtime. It’s hard to understand the narrative’s scope on a single playthrough, and there are lots of moments which can be missed. While I did enjoy the plot for what it was, I felt that the narrative’s execution came up lacking. The main problem is a tonal inconsistency which runs throughout. The characters tend to make jokes at the worst possible times, and the dialogue suffers from an overuse of profanity that ultimately robs it of any proper gravitas. There are dialogue trees but many of them amount to a choice between blind agreement and sarcastic hostility, with no actual impact on the game’s plot.

For some reason, the game’s puzzles feel inspired by old LucasArts adventure games that required you to use items in absurd ways, complete with sardonic quips when you don’t do exactly what the game wants you to. So many times, I’ve picked up an item only to think to myself, “I have no idea how this could be useful.” For example, early in the game you’ll need to flood a kitchen to melt an industrial freezer two floors below, to access two chemical samples that you then need to mix in a centrifuge (affectionately dubbed a “smoothy maker” by our scientifically challenged protagonist). The various “keys” to this puzzle are scattered across the floors and aren’t intuitive, and that’s not even mentioning the fact that centrifuges don’t mix things together but instead spin substances rapidly to separate mixtures into their base components; and the most amazing thing of all is that this puzzle doesn’t even advance the plot in any significant way!

Compare this game to something like Detention, which also uses the sidescrolling horror template: Detention has easy puzzles which anyone can solve, but it links each one to a narrative or emotional hook in the story. The Long Reach has difficult, confusing puzzles designed to break up chunks of exposition, leading to poor pacing and an overall lack of cohesiveness. 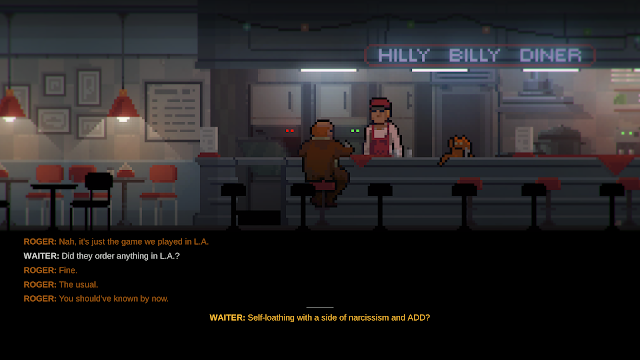 There’s also the odd glitch or inconsistency which can turn some puzzles into an ordeal. The most egregious are the ones which require you to exploit enemy behaviours: the enemies don’t behave consistently enough for this to be a compelling mechanic, and so you usually won’t pass the scene without dying a dozen times to the same enemy before “getting lucky” and then cruising through on the next attempt. There’s also the odd freeze or crash, which I’d be more willing to forgive in any other game, but The Long Reach tended to stop working while I wasn’t sure where I was supposed to go, and so having to boot the game up again just added to my disorientation. It’s possible to complete the game in two hours if you know what you’re doing, but most peoples’ first playthrough will be more akin to five or six, after factoring in time spent lost.

I left the game feeling frustrated more than anything else. With arbitrary, esoteric puzzles and a wildly inconsistent tone exacerbated by technical issues, I found it hard to get sucked into the game’s atmosphere. The clever plot twists and unique setting were all but drowned out by errant jokes about office politics. Your co-worker is demanding blood sacrifice to an eldritch abomination named Alan, and you’re still going to make a quip about your coffee cup going missing?! Get your act together, Stewart.