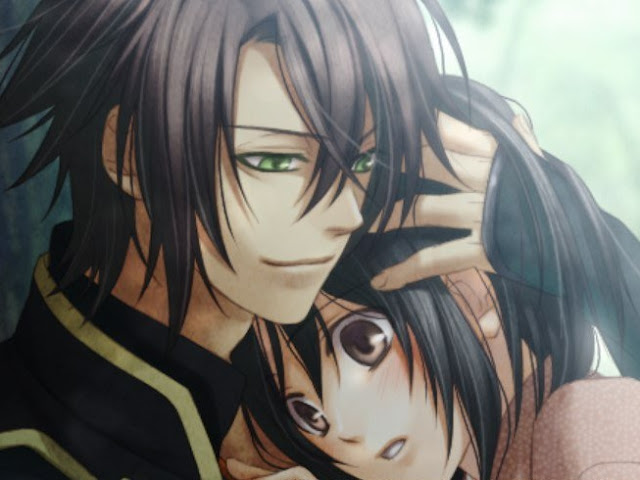 Just to get this out of the way first; if you haven’t played the first Hakuoki (Kyoto Winds – my review here) first, don’t think about jumping in with Edo Blossoms. This sequel does give you the briefest of introductions and background as a refresher, so people who haven’t played the first in a while can have their memories jolted, but Edo Blossoms is a direct continuation of the narrative from the first game, and really, the two behave together as one, so jumping in halfway is like tearing a book in two and starting in the second half. Looking beyond the fact that damaging a book should be criminal, you’re just not going to properly understand what’s going on.

Related reading: An excellent article by Matt C. about the real history behind the Shinsengumi.

With that in mind, given that I consider Kyoto Winds to be my favourite visual novel of all, it should come as no surprise that I also love the sequel. It’s not unreserved love, and we’ll get to that, but right upfront, this is a genuinely lovely game.

Edo Blossoms takes place immediately after the battle of Toba-Fushimi – a historical and decisive battle to the history of the Shinsengumi. If you’ve played Kyoto Winds you’ll know who the Shinsengumi are, but for everyone else, this was a military police force under the command of Japan’s shogun, at a point in time where the shogun was losing his power, and Japan was opening up to the rest of the world. In addition to being a period of military strife, it was a time of social upheaval, from fashions and food right through to the way of thinking, and those that stood to resist that change – including the Shinsengumi – were being steamrolled by the inevitable march of progress. So it’s not a spoiler to say the Shinsengumi lost the battle of Toba-Fushimi, and did so badly. Following the loss they retreated to Edo (Tokyo, today), and after a short period of recovery soon found themselves again embroiled in political, military, and mystical intrigue. This is where Edo Blossoms begins. 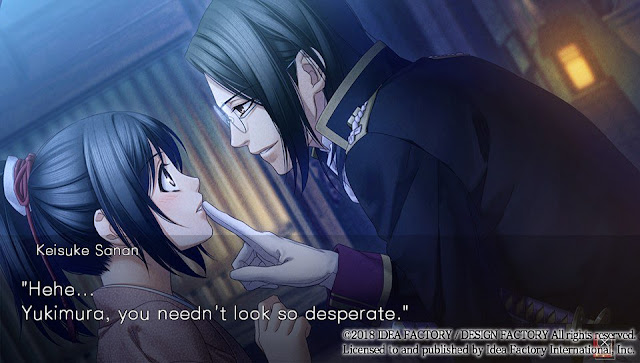 Interestingly, though the Shinsengumi are a major part of popular history in Japan, and most Japanese have at least a foundational understanding of them, in the west there’s very little substantial information on them. The books about the Shinsengumi tend to be poor in quality, and while there’s Wikipedia and other online resources, the basic reality is that where you can find dozens of deep, comprehensive accounts and analysis on the Sengoku warlords in English (which is great for Samurai Warriors fans like myself), it’s relatively hard to learn much about the Shinsengumi in the west. These are controversial people, too, with some believing them to be little more than thuggish violence personified, while others seeing them as quite heroic, so ideally you’d want to read accounts from a number of different sources to start to piece together a true picture of these people and their organisations. Hakuoki might be a fictionalisation, but it’s generally a good one, and while it most definitely prefers to present the “good guy” image of the Shinsengumi, it’s a good starting point for anyone who wants to learn about this particular chapter of Japan’s long, and rich, history.

For anyone thinking it’ll be a “realistic” history, though, note that I did say ‘mystical’ before. Though Hakuoki is based in real world events featuring real people, the game world also has people who double as demons, and others that are, effectively, vampires, complete with an aversion to silver and light, and an incurable bloodlust. This includes the Shinsengumi. The game vaguely chalks the cause of these things up as “science,” and “medicine,” but really, we’re looking at magic potions and beings pulled directly from Dungeons & Dragons here. Tonally, somehow, this actually all fits together well, and it’s a believable fantasy that does a remarkable job of mixing real history and the more fantastic elements. I will say that where Kyoto Winds slowly eases players into the more fantastic side of the world, Edo Blossoms goes all-in from the start, and I’m not sure that’s to the game’s benefit. The gentler pace of Kyoto Winds offers greater pacing and gives the story greater cohesion, but again, Edo Blossoms is really a continuation of the first game, so it’s not surprising that the “introduction” is minimalist and the pacing kicks off at a breakneck pace. The game is assuming that you know that you’re in the middle of the overall story.

Further driving the game away from being a piece of historical fiction is that you play as a completely fictitious female character, who got involved with the Shinsengumi at the start of events in Kyoto Winds. This game continues her story and, particularly, her deepening relationships and romance with whichever Shinsengumi warrior you care to follow. And, of course, as an otome game, that is ultimately the point; you’re meant to fall in love with one character or another. To this end, all the Shinsengumi are ridiculously attractive and charismatic men, and as a dating game, every so often you’ll be asked to make a decision from a couple of options, and the choices that you make will lead towards a number of endings that range from the romantic through to the horrific. 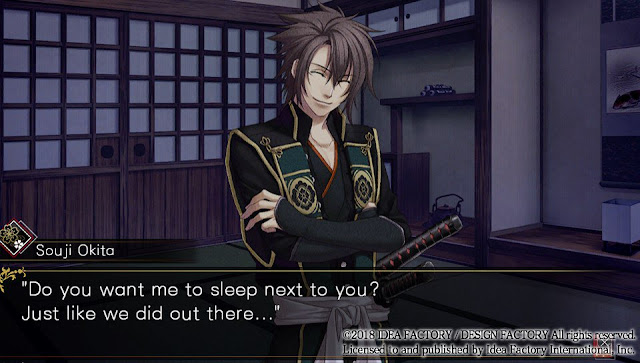 One extra bit of “gameplay” that has been added into Edo Blossoms is the ability to give the vampiric Shinsengumi your blood as their bloodlust starts to awaken. Alternatively you can provide them with medicine to help suppress the urges, or leave them to suffer through the pain. You decisions here have the effect of altering your man’s “corruption” rating, and the ending that you get will depend on just how high that rating gets. It’s a very simple system, but it adds just enough management to the game to keep you thinking as you play, and certainly adds a depth beyond the simple “romance meter” of most visual novels. At the same time, it doesn’t detract or distract from the core visual novel experience, which is important given that’s what people who enjoyed Kyoto Winds will be expecting.

Related reading: Another excellent otome visual novel based on a part of Japan’s history is The Men of Yoshiwara. Matt’s review of that on Nintendo Switch.

One concern I do have is that Edo Blossoms seems to have been localised by a different person – or people – and tonally it doesn’t feel quite the same. It’s hard to really nail down specific examples, but it seems like this translation is more inclined to modernisms, swearing, and slang, where Kyoto Winds came across as a more classical, elegant piece of writing and translation. I haven’t played the Japanese originals of either game. I don’t know if there was a tonal shift from one to the next in their native Japanese, or, if there wasn’t, whether Edo Blossoms or Kyoto Winds has the more literal translation. I do know that I found the writing in Kyoto Winds to be more appropriate and authentic to the image I have of the Shinsengumi and that period of history. These changes are subtle, and I certainly don’t think Edo Blossoms is written poorly in English. I just found the writing this time around to be surprising at times.

Edo Blossoms also struggles with the same issues that most books or films have when a sequel is a direct continuation of its predecessor; there’s not the same sense of fun about it. Generally speaking in literature, film, or any other storytelling medium, when a creator splits a narrative across a number of “volumes” they spend a lot of time in the first volume getting to know characters, the setting, and the narrative context. There’s more room to be playful, and the drama is more muted. With the second release, however, the story kicks off right in the heart of the narrative, and therefore sets a cracking pace that’s generally much more serious in tone. It’s the time that the main conflict is being established and the characters are being shouldered with ever more responsibility. Edo Blossoms is no different, and out of the gate doesn’t have the same sense of fun about it. There are plenty of moments of levity and periods of “down time” through the game, but it’s certainly a more sombre part of the story, which does sometimes feel at odds with the cute boys you’re meant to be flirting with. 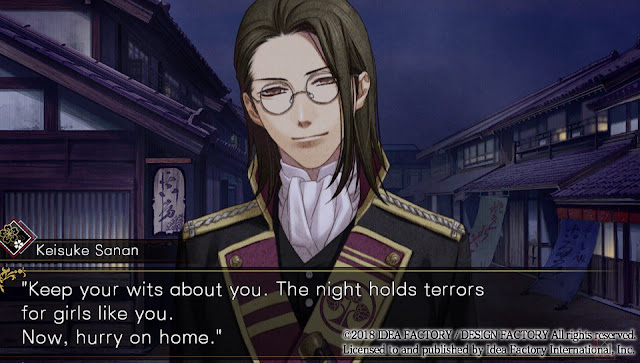 Edo Blossoms is utterly beautiful on every level though, just as its predecessor is. The soundtrack is divine, and the hand-drawn and traditional aesthetic in both character and environment designs shows a lot of love and respect for the history. Visual novels are hugely competitive around aesthetics, because players spend a lot of time looking at static backgrounds an minimally-animated characters, to the artists need to pack in a lot of detail to compensate, and this does mean there are a lot of beautiful visual novels out there. As far as I’m concerned both Kyoto Winds and Edo Blossoms are the very cream of the crop. You just won’t find better art direction anywhere.

The tiniest of oddities and issues keep me from loving Edo Blossoms quite as much as I love Kyoto Winds. But then, the latter is a game I would have played a half dozen times by now, if not more. Being a slightly weaker sequel to that by the tiniest of margins still means that Edo Blossoms is one of the best visual novels out there. And you can’t really play one without the other, anyway. Just as you can’t really read Fellowship of the Ring by Tolkien and not also read The Two Towers and Return of the King, so too do you need to play Edo Blossoms if you’ve played Kyoto Winds at some point.

Learning history through Dynasty Warriors! The women of the Three Kingdoms