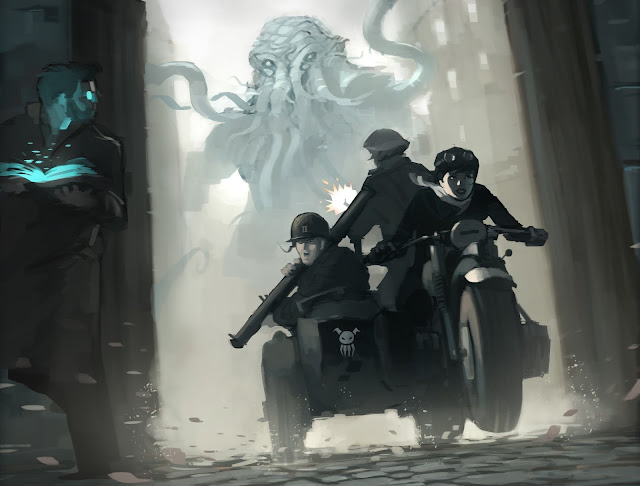 Way, way, way back when DDNet was a very different publication to what it is today, we were absolutely in love with a tactics strategy game that was effectively Final Fantasy Tactics, Cthulhu, and Nazis all brought together into something that just worked as a horror-themed strategy game. That game was Call of Cthulhu: Wasted Land. If you want to see how terrible my writing was from way back then, here’s the review I wrote on it.

Putting aside how old I feel now (has it really been over six years of DDNet? Wow), the creative drive behind that game, Tomas Rawlings, is back with Achtung! Cthulhu. We wrote about this game a few weeks ago, as its Kickstarter was underway, and the good news is that the Kickstarter was a resounding success. The game is happening, and as a nice bonus, it’s coming both to console and PC.

So I took the opportunity to catch up with Tomas, get a feel for how this new game will build on the wealth of experience and clear passion he has for Lovecraft’s material.

Matt S: Given that you’ve already produced a WW2/Cthulhu tactics game in the past, what made you want to come back for a second bite?
Tomas R: My interest in Lovecraftian works and turn based strategies has never ended! Plus there were things I’d wanted to do in Wasted Land that for time reasons we were not able to. Now I’m able to both add the learning from Wasted Land and also draw in elements of Achtung! Cthulhu Tactics to make something better.

I’m super proud of Wasted Land and so really excited about this new take on Cthulhu-gaming. We’ve run play tests (as pen and paper) which worked out really well, so I’m confident we’ve got something special here.

Matt S: What were your key takeaways from The Wasted Land, and how have you looked to build on your experience from that game for Cthulhu Tactics?
Tomas R: We targeted Wasted Land as a wide range of devices, which means the graphics were not as good as they could have been had we have focused more on higher end. I’m really pleased to say that Stuart Griffin, the artist on Wasted Land has joined the project along with the rest of Auroch’s art team and as we’re aiming PC/console – the game is going to look so much better.

Other areas; the character development is much more developed and gives many more options. The base combat system with our ‘Light and Dark’ and Momentum systems makes the gameplay really, really tactical and enjoyable. We’ve made a short video here of it…

Matt S: I was so happy to see the announcement that this would be coming to console as well – miniatures-based games and consoles aren’t generally known to mix. How do you think this game will hold up as a console experience?
Tomas R: Its perfect for console; I think the excellent XCOM games have set a standard for turn-based strategy games on console over the last few years that shows how good that experience can be. I’m playing . I’m no stranger to strategy games on console – I was the designer of Savage Moon on PS3 for example, so I’ve been itching to get back on console and huge thanks to Ripstone, they have made this happen. We’ve been working though the UI and are confident we’ve got a solid control system that will make it a smooth experience and focus the player on gameplay above all else.

Matt S: We’ve seen so many developers tackle Lovecraft and his mythos. Over and over again we’ve also so seen attempts to capture the unique aesthetics and tone of Lovecraft fail. What does “Lovecraft” mean to you, and what kind of emotions and thoughts do you try and encourage from players with your own work on Lovecraft?
Tomas R: Lovecraft and the small group of people who interacted with him (such as Robert E. Howard — who would become famous for Conan the Barbarian , and Robert Bloch — who would go on to write the famous novel Psycho, to name but a couple) in effect created an ‘open source’ world building setting with the Mythos. What we’ve seen over last decade as the Cthulhu Mythos has gone mainstream is that it has undergone a constant set of reinvention, renewal and evolution. In fiction it’s great to see we’ve moved away from just copy/pastiche to full on reinterpretation; I’m a huge fan of all of Laird Barron’s weird fiction works, and other highlights for me include Victor VaValle’s The Ballad of Black Tom and Kij Johnson’s The Dream-Quest of Vellitt Boe.

For me what all these have in common is that sense of the vulnerability of humanity, the removal of us from being the apex predator, to being way, way down the food chain. That’s the cosmic horror of Lovecraft’s work and that is central to what we’re creating, that there are powers we just don’t understand and yet we think we do…

Matt S: Across film, games, and other media, the Nazis are constantly associated with Lovecraft’s mythos. Is that just a consequence of the legends around the Nazis loving the occult, or are there other reasons that creators like matching the two, do you think?
Tomas R: What makes Achtung! Cthulhu so interesting (and add some existential horror too) is that it’s based on truth. Many top Nazis were indeed into the occult; they were sending out expeditions to look for lost ‘races’. So when you posit the idea that there was something out there to find, something that answered their calls… that’s a scary proposition.

War is also a powerful setting for horror, as it has so much horror anyhow. That extra layer, done well, just grows the fear more. There is also the fact that the Nazis had all the future-tech projects – I mean they were making plans for a space station while they were building rockets so again for fiction you only need to take that a step further and the war’s outcome starts to look very different.

Matt S: I’ve always felt that Lovecraft’s creations weren’t intended on being “evil”, as such. What they do to humanity might be evil from our perspective as humans, but I’ve always seen the Elder Gods as distant and beyond such mundane ideas as morality. How do you look to rationalise that with the Nazis, which is as good of a symbol of irredeemable evil as we have?
Tomas R: You’re right on Lovecraft’s creations. Notions of ‘good’ and ‘evil’ no more apply to them than they apply to nature itself. They just are. One of Lovecraft’s favorite of his own works was The Color Out of Space, which (spoilers ahead!) depicts an alien life form arriving on earth. It corrupts and destroys the land and people around it as it moves from one stage in its life cycle to the next. It cares as much as bout that death and destruction as we do when mowing the lawn (as we slice and dice the grass and destroy the micro-habitats of many insects).

That said in stories like Reanimator or The Case of Charles Dexter Ward we see protagonists who are villains, in that they are human (sort of in the latter case) and so understand the morality of their actions and do them anyway. Achtung! Cthulhu has a mix of these motivations blended into its narrative – so evil by design and just evil by nature.


Matt S: Just how complex are you looking to make this game? Is the plan to make it accessible, or a hardcore fan’s dream?
Tomas R: Both, it will be easy to learn to play, yet has depths of tactical complexity.

Matt S: Have you ever wanted to explore Lovecraft through other genres?
Tomas R: I’ve had a bash at fiction many years ago. I’d like to try again some time. I’d also like to try some non-fiction on the meaning of the Mythos works, as I’d like to explore that area too. Bust as a games designer my first and most natural way to express my ideas is via games.

Matt S: Is there any chance that we might see a return of The Wasted Land as well, on modern platforms?
Tomas R: I doubt it. Best thing to do is back us for Achtung! Cthulhu!

Matt S: Finally, what games are you personally playing at the moment?
Tomas R: I’m on XCOM 2 on Xbox One, which is really good. I’ve also been playing Bloodbowl 2 there too. On PC I’m about to get Into The Breach, so looking forward to loosing hours to that. I also still use my PSVita a lot too. Playing Darkest Dungeon on that.