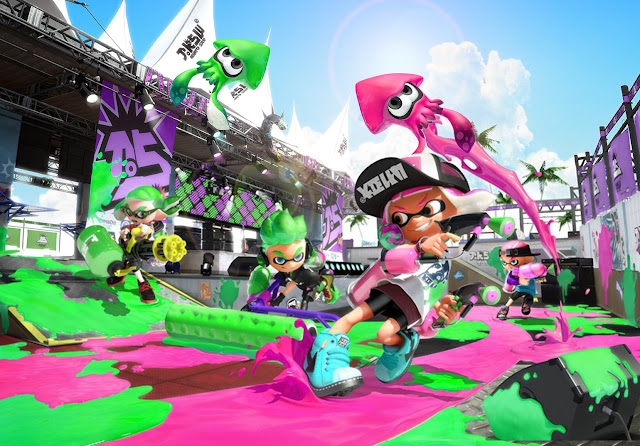 One of the buzzwords that’s cropped up on the industry side of game development in recent years is the idea of ‘games as a service’ or ‘games as a platform’. Often when people talk about it they mean it in terms of a game that’s got microtransactions and DLC up the wazoo, but that doesn’t necessarily need to be the case, as per the tweets below from one of the industry’s analysts, Daniel Ahmad:

Just like every publisher, Nintendo is embracing the Game as a Service model.

(Note, Games as Service =/= microtransactions. It just means a game with ongoing support, like Splatoon 2 or Rainbow Six Siege for example). pic.twitter.com/C13J8c6ywM

The aim here is two fold.

2. To encourage additional spend on software titles after the launch of the game. E.g. Zelda season pass.

In theory, this is a good thing, right? A developer releases a game and then continues to support it by adding more stuff into it for months and years afterwards. It means that if you love a game it continues on into something becomes part of your daily routine, and your go-to for entertainment for hundreds, if not thousands of hours.

Just look at Overwatch, or League of Legends, or Destiny 2. Look at the promise of Final Fantasy Dissidia and its roadmap that will nearly double the number of characters in the game (and that’s just a start). It’s what Street Fighter V did and that game’s been enduring enough that Capcom’s just re-released it. Look at most of the mobile games – look at Clash of Clans. These are games designed so that you’ll never actually stop playing them. And, again, that sounds like it can only be a very good thing for people that like these games.

But it’s not a good thing at all for the health and sustainability of the games industry, nor its creativity. And that, ultimately, is a bad thing for consumers.

I’ll address those points in sequence:

1) It’s not good for the health and sustainability of the games industry.

Here’s the thing: we, as players, fundamentally benefit when the games industry is profitable. When developers make money from their games, they stay open. When there’s a lot of different game developers staying open, there’s competition, which drives everyone to be better and helps keep costs (both of making games and buying them) down.

Here’s another basic reality: People have more money than they do time. For all the complaints about how expensive games can be (they’re not, but that’s a discussion for another time), most people have more games than they have time to play them. That’s why we joke about backlogs and unfinished games – we have bought more than we have the time to play. Steam sales and Humble Bundle keep people with limited means in an excess of games. It is time that is the precious resource game developers are really competing for. Money comes from convincing a player to invest their time – the more time they invest, the more loot boxes or DLC they can be encouraged to buy.

But when I say that time is a limited resource, it is really limited. Each person has 24 hours in a day. At least four to six of those hours is occupied with sleep (assuming the person is healthy), and at least eight to ten of those hours are occupied with work, education, and travel (assuming the person lives to a standard work or school day). Most people have further study, domestic, or social commitments, which occupy another block of time, so in the end the typical person might have a couple of hours to dedicate to gaming. If not less. Occasionally they’ll treat themselves to a marathon over the weekend.

When games were finite – even when they were long (such as in RPGs or strategy games), a person would use that limited time to work through a game before moving on to the next one. You’d finish a Final Fantasy and move on to Chrono Trigger. You’d achieve global domination in Civilization and, knowing that the “content” of the game would be the same (albeit arranged differently) if you played it again, you’d move on to a game of Sim City. In other words, the entire industry was structured around keeping people’s time flowing from one game to the next. Even the most time poor person would get through at least two or three games in a year this way.

But the emergence of ‘games as a service’ has upended this. Now you’re being actively encouraged to remain with one game into perpetuity, and the more time poor you are, the more exasperated this effect becomes. Because there’s stuff constantly being added into the game, there’s never the sense that you’re “done” with it, so it becomes habit forming, and then, so far as every other game is concerned, another block of your limited time is no longer accessible – it may as well be time added on to the work day or sleep for the access that other developers will have to it.

This isn’t good for the industry. This concentrates the player time into an ever-shrinking pool of developers and publishers. The ones that can afford to heavily market their games and rapidly churn out more content to keep the players the marketing hooked in on the game. That consolidation, in effect, creates monopoly effects within the industry, and there is proof of this – as any smaller developer what it’s like to try and compete on the app store now. With giant corporations now dominating the app store with free-to-play games that trade in people’s time, it’s by far the most hostile market to break into as a startup.

And, ultimately, that makes it hard for the smaller developers and publishers to build sustainable business models. They’re forced to try and compete with the “unlimited content” products that the dominant forces are creating, because that’s where audience expectations are being tuned. Try anything else and they’re left scrambling for the scraps – again, not in regards to the dollars, but the time of players. There just isn’t much left, and if you can’t occupy a player’s time, you’re not going to get them to spend money on your game.

2) It’s not good for the creativity of the industry.

‘Games as a service’ models require that the game is built in a very specific way, and that limits the creative opportunities available to developers. Games as a service need to be so open-ended to the point that narrative and storytelling becomes a secondary concern; there’ll be some of it squished in there, but often it’s used as the introduction to the game before players get to the ‘endgame’ where the game becomes an endless grind and repetitive actions like difficult boss battles or competitive play between players becomes the dominant experience. As long as developers provide players with new maps, weapons, costumes or the like, they’re providing the kind of content that resonates in this end-game experience.

The problem with working within a finite game – anything story driven – is that it does indeed end, and while you can add extra side-stories in the like to the game via DLC, these require substantially more work than pulling together a new map or rolling out new weapons or playable characters. And those side stories themselves are finite, so once the player has finished they are again left without much to do. New randomised loot or battle maps is content that can keep players playing until the next update.

And so any developer that wants to occupy a player’s time is being pushed into certain design directions, and we’re seeing that clash with what the game should be about in a very ugly way. Look at the recent Lord of the Rings title, which adopted loot boxes and other unending content principles in order to maintain its audience, or look at the way that Dissidia Final Fantasy all but dropped the single player experience in order to focus on where the on-going play would be in online multiplayer. Developers feel the pressure to target a player’s time (and money secondary to that), and it’s affecting the creative design of the games that they’re making.

3) It’s not good for the consumer.

Game developers and publishers don’t really lose out in this – aside from the ones that fail to create that ‘games as a service’ experience and therefore struggle to retain a player base. The successful game developers find themselves making games that don’t quite meet their creative and artistic ambitions, but make good money and they get to keep their jobs.

It’s the consumer that misses out, with ever-more formulaic games displaying ever less creativity. They’re stuck with loot boxes and DLC and other nonsense. Those games that don’t have that stuff tend to become unnecessarily bloated, because game developers still feel the need to compete to provide ‘value for money’. Persona 5 was twice as long as Persona 4, and didn’t need to be. Ultimately it wasn’t nearly of the same standard, either, precisely because it felt bloated. But because people are now used to spending hundreds of hours in the grind – even with “free” games like League of Legends, any title that doesn’t get players into three figures with play time is almost instantly forgotten.

There are rare exceptions that buck the trend. Last year’s Wolfenstein release was a highly prominent and lauded FPS that didn’t degenerate into an endless content ‘games as a service’ mess. Yoko Taro proved that “short” JRPGs at “just” 50 hours of length could resonate with NieR: Automata.

But those are the exception to the rule. Outside of the really indie space, where some amazing creativity is involved, this push towards ‘games as a service’ has led to an unsustainable level of bloat in the industry – pushing players to play fewer games and become less aware of, let alone interested in, anything that breaks the mould. So as bad as the aggressive capitalist exploitation that we see in lootboxes is, the real problem this industry faces is very idea of ‘games as a service.’ It is something that sounds great on paper for players – and is indeed used as a marketing term – but is actually transforming the games industry in a way that none of us should be looking forward to.