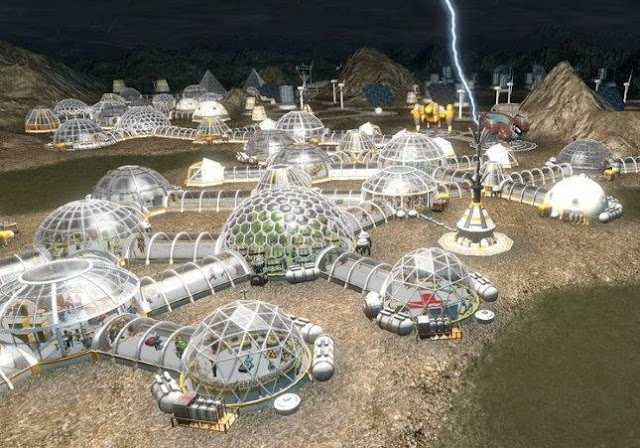 There’s a natural synergy between the city builder, and space colonisation. The entire appeal of a city builder is taking a wide, empty space of land and then building it up by adding buildings and people so that it that nothingness can become a thriving metropolis. Space colonisation, in turn, is about finding a piece of wide, empty space of land and then taming it to support a thriving population of settlers. Planetbase capitalises beautifully on that synergy.

Related reading: Another city builder with a similar theme on PlayStation 4 is Aven Colony. Matt’s review.

You start out with a tiny population of the bravest colonists of all. That tiny handful of people are responsible for landing on a desolate hunk of rock, and immediately getting to work building the foundations of a base. They’ll need to build power generators (solar or wind), and storage batteries as a backup, so that once the sun goes down and the wind eases, the base’s critical life support functions can continue to operate. The colonists will need to build water extractors, living quarters, mines and farms, so that they can then continue to build and feed themselves once the initial supplies they landed with have run out.

Then – and only then – can they start to think about building a landing pad and encouraging more colonists and traders from off world to land.


Planetbase’s best moments are in the early days of your colony, when survival is a real challenge. When the sun goes down and you just haven’t had the time to build a power storage battery to get you through the night, or morale among the colonists starts to dip below healthy because the only relief they have from the monotony of work is a tiny TV screen in the tiny communal living quarters.

As you’d expect, the further you get into the game, the easier basic survival becomes. Once you’ve got large farms churning out food of a wide range of different flavours, and a substantial manufacturing space churning out materials that you can sell to traders for extra cash, it all starts to feel comfortable. You’ve got bars for colonists to chill out at, a medical facility to reduce the risk of deadly injuries, and a steady stream of intrepid colonists to help spread the workload out. Sure the larger bases also have an increased risk of a wayward meteor or two crashing into buildings and causing some havoc, but as a whole, as a colony starts to thrive, there remains lots to do, but it all starts to feel good. As it should, too. There should be that sense of satisfaction and reward for hitting major milestones and achieving a self-sustaining colony. The developers have done well in capturing that sense of progress.

There are a lot of buildings to construct, too, but unfortunately the visual variety between them isn’t up to standard. Of course, it’s realistic that a colony on an otherwise inhospitable planet would indeed look like an endless stretch of domes, but it doesn’t make for the most inspired visual experience. It is possible to press a button to make the domes disappear, revealing the content of each facility, but even then the variety between them is minimal. Another colony city builder that released on the PlayStation 4 last year, Aven Colony, had a far better understanding on how to visually distinguish buildings from one another to that the end result was a glistening, majestic city. It wasn’t realistic, but it was beautiful to behold. Planetbase’s budget was probably far less, but it does show, particularly over the longer term, when the entire landscape starts to look like a sheet of bubble wrap. 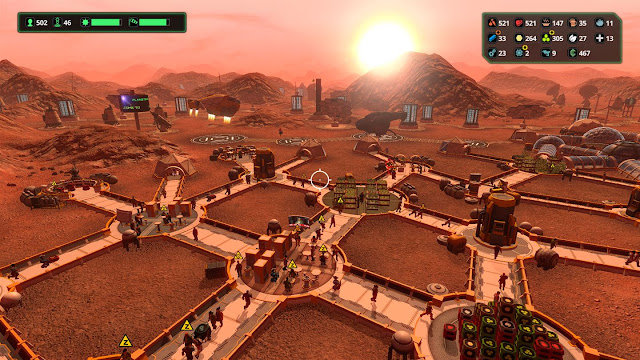 There are also moments where the game lacks the refinement that you would expect for something that’s been in ongoing development for a couple of years now. For one example, I had a critical worker drone get itself “boxed in” after constructing a “square” of buildings, each connected by the tunnels that Planetbase mandate. The little robot thing was left in the middle with no way out. I had forgotten that it was possible to recycle buildings, and as a result, there was a big block of construction that wasn’t being undertaken because the robot was “stuck” and the colonists themselves weren’t going that far to do the work themselves. As a result the game wasn’t actually going to make any further progress, so I restarted. I kicked myself when I remembered that buildings could be recycled so there was an easy solution to the problem I restarted the game over, but it would have been far more efficient and easy on the player if the engine could recognise when a character is “stuck” and subtly teleport them back to somewhere where they’re again able to move around.

Related reading: It might not be set in space, but Cities: Skylines is THE simulator that fans of the genre should play. Matt’s review of the PS4 port.

Planetbase is also generally more streamlined and simplified than the aforementioned Aven Colony. With the latter game I would spend so much time pouring over the data and graphs to try and identify where problems might lie, or how to address issues in my colony. Planetbase’s feedback tends to be more visual; you see issues on screen, and solutions for them are far more straightforward – usually involving building something to compensate for whatever’s in too short supply. There are a lot of buildings to put up, but the interconnectedness between them, and the impact that buildings have on one another, is more limited than you see in more complex city builders, and over the longer term it means Planetbase feels like it lacks the depth of some other games.

Planetbase is good, and I’ll never complain about having more simulators to play on my PlayStation. That said, it’s not up with the best examples of the genre. Cities: Skylines and Aven Colony are games you could easily lose months to, while this one is more of a temporary distraction. Given January’s quiet in terms of big releases, though, the developer did pick the perfect time to get this particular game out there.

Ys VIII: Lacrimosa of DANA is finally coming out on PC