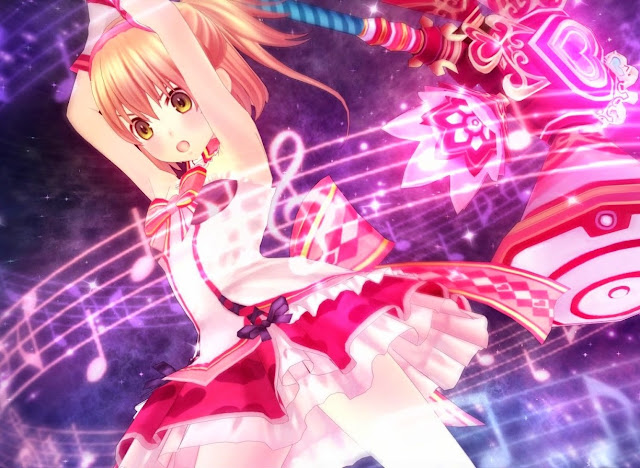 I went through a brief period of wanting to be an idol when I was a child. For the uninitiated, or if you didn’t grow up participating in Asian culture, an idol is someone who captures the heart of a nation through song and dance. That sounds overdramatic, but it’s true for the most part. Japan, Korea, and China all have fanatical idol cultures, and it was rare for someone of my age group at my primary school to not wistfully aspire to that sort of stardom.

Related reading: For another take on the game here’s Matt’s review of the original on PlayStation 4.

Idols occupy a strange space. They never grow old, they’re always upbeat and innocent, and they thrive in a relentlessly competitive environment. All those are traits that are prized by all entertainment industries regardless of geographical location, but the companies who manufacture and produce these idols take it to the next level. Idols are born through auditions, dance practices, training, dieting, restrictive employment contracts, four-chord songs, and the fickle adoration of obsessive fans. They’re also not meant to date (because they’re meant to be aspirational for their fans who dream of dating them), they’re forcibly retired out the moment they start to “age” and very few of them go on to obtain respect as artists, actors or models post-idol career. It’s not a world that’s above criticism, in other words, for all the adoration that it draws from people that get lost in the world.

As a kid, I knew about all of those things and yet it didn’t deter me at all. As an adult, I can see how idol culture has its toxicity and I know I wasn’t nearly strong or talented enough to ever survive that career path. As a consumer of Omega Quintet, I was surprised by the critical tone that the game had even as it was dressed up like an idol fan’s dream. 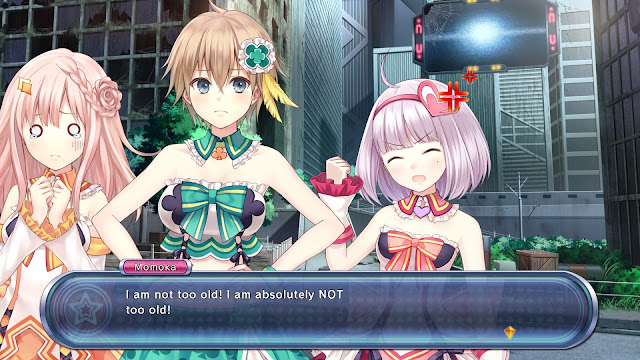 Omega Quintet is a Compile Heart game. It’s worth noting that because it has many of the staples of Compile Heart games – young, leggy protagonists who err a little on the side of ditzy, a rather dense combat system, and anime tropes out the wazoo. (And the panties. Let’s not forget about that – ed). If none of those appeal to you at all, then the game is going to be a hard sell, even if its original premise is ridiculous and amazing in equal measure.

Fast-forward to apocalyptic Japan, which looks about the same as it does now apart from an infestation of oversized dark monsters (called Blare) that appear out of warps in the fabric of space and time. The elite force dispatched to take out these monsters are a group of idols, also known as Verse Maidens, who bring peace back to the land through the power of music and heavy weaponry. They draw their strength from their fans, and their battles are broadcast live around the city like true concerts. The protagonist, Takt, gets dragged into all of this when one of Japan’s idols ages out (despite looking about 18), and the jabs at idol culture just keep coming.

You have to guide a rookie Verse Maiden and your childhood friend, Otoha, into defending the world from Blare. However, because she’s an idol, the job is never just one-dimensional. Acting as her quasi-manager and confidant, you’re tasked with making sure that she sings when she has to, and that she maintains her strength by playing to the whims of fans. The presence of fans and their endless demands for trivial things are a huge contrast to the otherwise deadly manifestation of the Blare, but that duality only serves to drive home how fans contribute to the stress generated by idol culture. 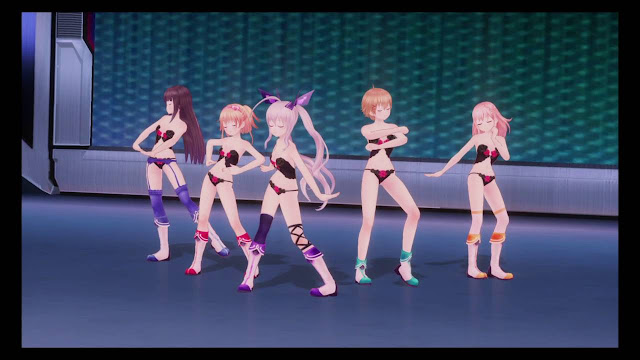 There are plenty of other signifiers as well that make fun of traditional idol culture and its obsession with people like Otoha. All the characters look preternaturally fresh-faced, their personalities embody various tropes to the point of feeling manufactured at times, and for those who want to fully indulge in idol management, there’s a PVS mode which allows you to choreograph your own music videos of the girls. With all this stuffed into its adorable, impractically-clothed package, you may be wondering if Omega Quintet stretches itself a bit too thin. Happily, it manages to juggle its various modes with aplomb, though some elements such as relationship bonds are shallower than I’d like for a game that outwardly focuses a lot on concepts like friendship and being there for one another.

However, where Omega Quintet’s density really makes itself known is in the combat system. It takes its idol fixation one step further than the rather morbid “battles as a stage” concept by laying out zones in combat that look like a stave. Depending on the range of your idol’s chosen weapon and skills, you’ll receive either a penalty or a buff to your hit chance and to the effectiveness of your offensive capabilities. It’s very abstract, but it’s very musical in design.

To put it simply, everything is turn-based. This is essentially the first layer of knowing how to fight. You then have the second layer of turn order and positioning; you can make sure that your idols are arranged on the field to maximise their weapon potential, and you can also use certain attacks as Takt to delay the turns of enemies to stall out deadly moves. You then have to consider the skills and weapons that your Verse Maidens bring into battle, which you unlock via analysing disks and spending points. Each Maiden comes with their own default weapon and quirks, and victory is about using their proficiencies intelligently. The skill trees are almost impossibly deep, and the stakes get higher in battle once you realise that taking damage affects not only the idols’ HP but also their dignity. Hint: it’s got to do with their clothes taking damage too. 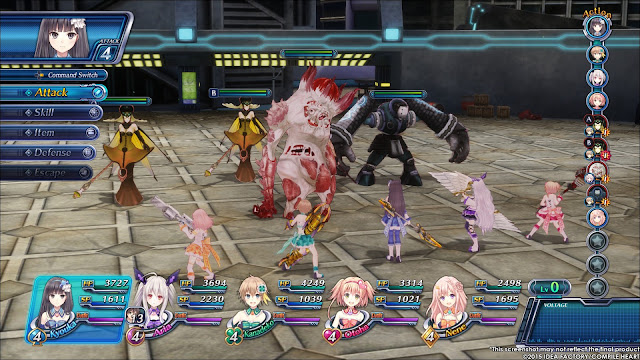 One of my complaints is that the tutorial mode frontloads a lot of information very quickly. While I enjoyed how meaty the crafting, weapon, and combat systems were, a lot of my time was spent reading and absorbing textual information about mechanics which I didn’t have the access to yet during the tutorial. Another small issue was that better tutorial pacing would have also made for better narrative pacing in the early chapters, and the gating of certain areas in levels early on served as a warning that Omega Quintet could very easily turn into an exercise of repetition in old environments. Don’t get me wrong; it’s not a blight against level design, but the bulk of the design work for this game clearly went into the idols and their music, and not their surrounding environs. This serves to help the Verse Maidens stand out more in an otherwise bleak universe, but if you’re comparing it to other titles in this day and age, the graphics can seem quite rudimentary.

Overall, Omega Quintet is a game that good-naturedly tries to punch above its weight. You’ll find yourself gravitating towards a particular Verse Maiden over the course of the title, and there’s just something incredibly uplifting about defeating an unknowable evil with the power of friendship. I never got sick of the way that the music would crescendo during a boss fight, timed almost perfectly with the use of do-or-die skills by the party, and the combat maintained its novel feel much longer than I thought it would. Don’t let the fact that it was panned by most critics put you off; it isn’t the prettiest game (although the pesence of my personal favourite Verse Maiden Nene would disagree), but it’s a satirical goodie bag of knowing winks and magical girls that has done its best to capitalise on idol culture. Lucky for us, it’s succeeded and it looks adorable doing so.