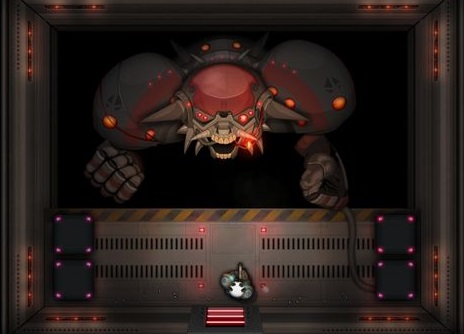 Feral Fury is a violent top down shooter featuring militaristic pandas in a post-apocalyptic environment, and it’s a pretty good game. I feel like that’s all the description a game like this needs – it’s made by Skandivania Games out of Norway, a two person team whose company logo is an eviscerated teddy bear with anatomically correct organs. The gameplay is reminiscent of arena shooters like The Binding of Isaac, drawing earliest influence from NES Zelda dungeons and the more action-based Mysterious Murasame Castle. Aside from some violence and a dark, oppressive aesthetic, Feral Fury is ultimately a very agreeable game which succeeds in ticking most of the boxes it goes for.

People who have played The Binding of Isaac will know exactly what to expect here: top down, twin stick shooting, randomly generated rooms, powerups and a slow grindy unlock system you access after every death. The levels are fairly nondescript and while enemy placements are challenging, I never faced one that made me marvel at its design. There’s a lot of emphasis placed on a combat roll: your default walk is quite slow, and enemy projectiles are big, but also slow and arc predictably. It all comes together to create a much more skill focused game, downplaying the rogue-lite influence: powerups are useful but they wear off quickly, and if you can’t dodge a bullet then you won’t get far.

Feral Fury’s mechanics also set the game apart by being far more goal orientated. The rooms are kept small and usually contain all the necessary information (the enemies, the hazards, the explosives, the powerups) at a glance so the player knows exactly what they need to do. There’s also a clearer sense of progression – it’s possible to get through lots of stages without worrying about the rogue-lite elements, and it plays more like an arcade style shooter than things like The Binding of Isaac or Enter the Gungeon. There are even bonus stages with different gameplay mechanics which hark back to the design philosophy of old 90’s arcade games. The result is a game which doesn’t waste your time as much with RPG-elements and is far more focused on providing a consistent challenge. 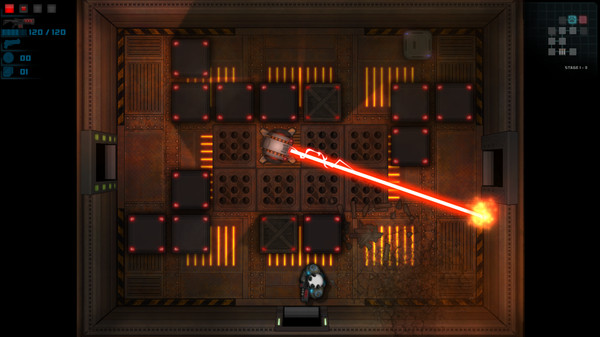 The most disappointing aspect of the game would have to be the boss battles. The room-to-room feedback loop is great: it keeps the player moving and provides new challenges at every turn. The bosses, however, seem to show the logical extreme of the game’s maximalist design. The bosses have enormous sprites so that aiming at them is never a challenge, and because their bodies take up so much space, not much is left for their attacks or for the player to move around in. Thus, boss fights are the most lethargic moments: players can shoot without worry about their aim, and strafe gently left and right to avoid most of the fire.

The leap from PC to PS4 has been very kind to the game. The atmospheric lighting looks great on the big screen, and there have been little graphical updates to make everything look more dynamic. The addition of controller rumble also gives the explosions even more juice, and the result is a game which feels great in your hands. My only complaint is that the sound balancing can occasionally be subpar – sometimes explosions upon explosions become far too loud – and the music is often drowned out by the punchiness of the gunfire.

For what it is, Feral Fury is a lot of fun, building upon established arena shooter conventions with high production values and vibrant, kinetic gameplay. While I admit more could have been done with the game’s interesting story and setting, I found every other facet to be immediately enjoyable. If you don’t mind some things feeling like a retread of prior games, Feral Fury is a competent entry in a universally enjoyable genre.