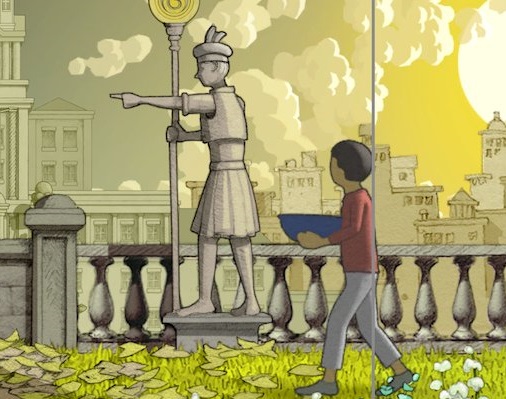 Gorogoa is one of the most beautiful puzzle games ever made, and it’s an experience which would enrich the lives of anyone who played it. It’s part picture book, part adventure game, reminiscent of Loveshack’s Framed and Nyamyam’s Tengami, and yet predating both those games. Developed by Jason Roberts and published by prolific art-game-collective Annapurna Interactive, Gorogoa is a work of art unlike anything before it.

Related reading: Another puzzle game that relies on being beautiful is Tengami. Matt’s full review of the game.

Gorogoa arrives through a long and arduous development process, taking over five years of idea revisions and rewrites until it reached a state which developer Jason Roberts was satisfied with. It’s a game drawing inspiration not from other games, but rather different mediums such as comics, physical card games and paintings, and as a result it feels like playing a work of art. It’s helped by the Switch’s touch screen which, while a little too small to display every detail in the game’s graphics, allows a more tactile control scheme which allows the player to touch, feel and move the game’s various pieces as they see fit.

Gorogoa’s puzzles largely task the player with recognising patterns and making connections between two otherwise unrelated pictures. Since the world can interlink and fold onto itself depending on how you move your individual frames, the puzzles are quite purely playful – moving pictures around to see how they fit together will eventually unlock your passage further into the game. Levels appear intuitive at first: the goal is always to guide your main character to a coloured orb, so he can add it to his collection. Getting to the orb, however, is where the joy is found: by picking up and moving each image the player can manipulate the world and build impossible passageways through space and time – and the answer is never what you’d expect. The puzzles are also heavily laden in symbolism, adding an extra layer of meaning to every action. 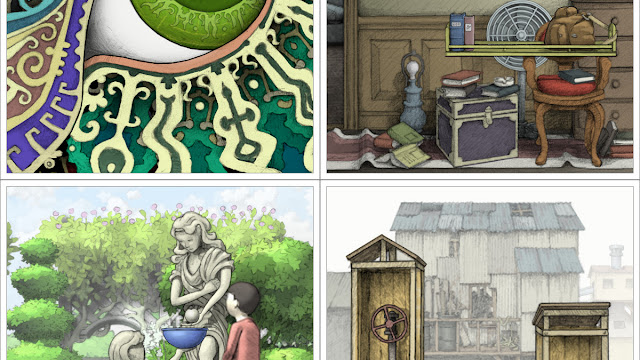 The story can seem nebulous to some, but it’s more a tale of emotions and feelings rather than plot and structure. I interpreted it as a metaphor for uncovering a family history – understanding that the narrative of ancestry does not always occur in a linear fashion, but rather learning one fact can unlock the door to learning another, shedding more and more information until a beautiful, complete tapestry appears. Other writers have played Gorogoa and found themes of religion and spirituality, war, trauma and coming of age: it’s one of the most open-ended narratives available on the Switch. Gorogoa’s narrative is extremely non-linear, taking every opportunity to surprise players by throwing them into the past, into the future, and then back to where they were half an hour ago. It’s an experience best undertaken in one three-hour sitting, so that no important information is forgotten and every symbol gets to have its lasting effect.

That being said, the story is absolutely crucial to the enjoyment of the puzzles. Gorogoa lacks the cool, mysterious style of Framed and the zen-like exploration of Tengami – its graphics are elegant but simple and the puzzles are mindblowing but not necessarily challenging. It’s not a game you play to test your puzzle solving ability. The value lies solely in the journey, and the way the puzzles integrate into the story. If you’re not one to appreciate a more surreal, expressionistic story, the game is going to seem confusing and messy, but those with more patience will uncover a complex and heartfelt narrative.

Gorogoa is quaint, expressive and beautiful, delivering a lush narrative full of different potential interpretations carried by game mechanics which challenge players to think in unfamiliar and creative ways. Even in its quieter moments, Jason Roberts finds a way to make every moment feel poignant, and every movement seem otherworldly. Despite simple puzzles, the solutions always manage to conjure the kind of childlike magic that deep down we are all familiar with, that we are all still searching for on some level. It’s a lovely game to be explored, to be shared, to be discussed, and to be revisited later down the line.