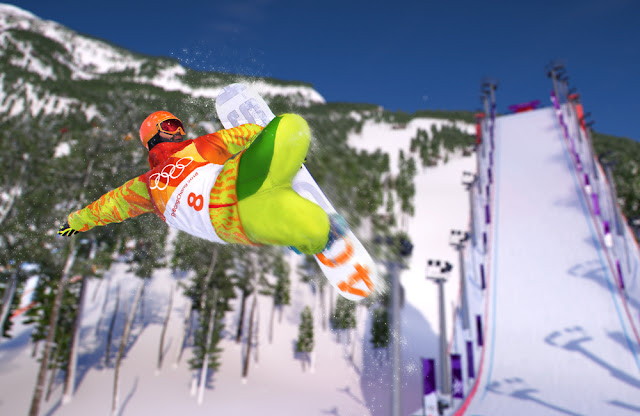 It used to be that every Olympic Games would come with a slew of tie-in video games. Before “licensed” became a dirty word, before Mario and Sonic were the only game characters still religiously attending every competition, you could set your clock by hastily put-together games thing to cash in on the worldwide Olympic fervour.

I’m some ways, Steep: Road to the Olympics feels like a more accomplished take on those licensed games of old. With Steep as its base, the DLC is far more polished and well-designed than many an Olympic tie-in video game. With the underlying ski and snowboard systems already in place, Ubisoft were able to focus their efforts on making the new events and locations as rich as possible.

Road to the Olympics adds two new maps to the game, one of which is based on the venues for the PyeongChang 2018 games. Here, you get to take part in a handful of different official Olympic events: Big Air, Downhill, Giant Slalom, Parallel Giant Slalom, Half-pipe, Cross, Slalom, Slopestyle, and Super-G. A lot of these mirror the sorts of ski and snowboard challenges in the base game—there are plenty of big jumps and snow parks in vanilla Steep, for example—while others, like Super-G, offer an experience quite unlike anything else in the game. Even for the ones that aren’t entirely new, the Olympic dressing certainly makes them feel distinct. 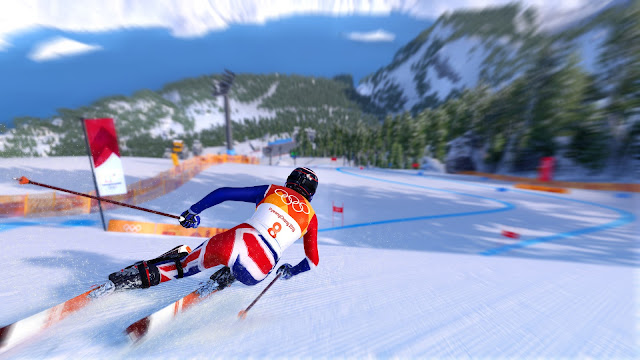 Big Air is definitely the highlight for me, and not just because it’s a new event making its debut at PyeongChang. The complexity of building high-scoring runs in Slopestyle and Half-pipe is well and good, but there’s something beautiful and elegant in the simplicity of Big Air: one jump, one chance to pull off the biggest, most impressive trick you can.

The race events also offer something a bit different, putting emphasis on speed and technical precision. I tend to prefer freestyle disciplines in games like this, but slowly mastering a Downhill or Super G course through trial and error is an oddly compelling experience. It makes me wish that bobsleigh had been included as well, just to take that rush to its extreme.

All of this comes in a framework that’s a lot more structured and challenge-driven than the base Steep experience. You can’t free-roam in PyeongChang, as far as I can tell; instead, all the events are present on the map and you just select them to take part. It’s odd, because this is one continuous map like the others, and you can stray off your chosen event’s path for a bit if you so desire, but if you’re away for too long you’ll end up being cut short with a “did not finish” score. The maps itself is based loosely in the real-life Winter Olympics venue, and though it’s not a direct re-creation (as far as I know), it certainly shows a similar design sense in things like its slopestyle course. That just makes the desire to explore all the more pressing. 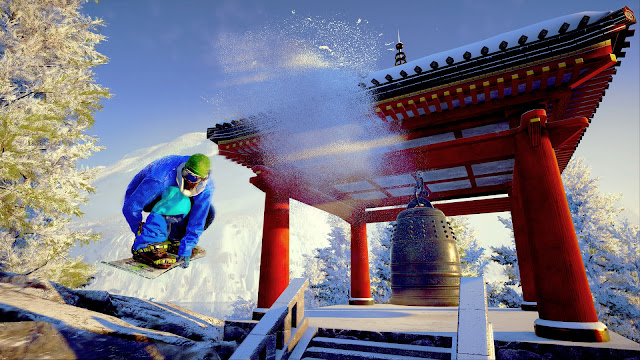 Fortunately, Road to the Olympics does appeal to the more freeform, open-ended, exploration-driven elements of vanilla Steep with the inclusion of a Japan map. This is a big, open playground that’s yours to explore, with four different areas based on places like Sapporo and Yamagata. Like the base game, you start off with a handful of drop points available, from which you can snowboard, ski, and glide to your heart’s content, uncovering new drop points, challenges, and points of interest along the way.

Japan offers up its own unique landscape, with plenty of big cliffs, deep ravines, and a few volcanoes—one of which has a frozen-over crater lake that you can walk on. Depending on where in the Japan map you go, you’ll see autumnal cherry blossoms, shrines, onsen, and Yamagata’s famous juhyo “snow monsters”. That’s all accompanied by a rather soothing score consisting of traditional Japanese instruments, adding up to a particularly serene experience when you just ignore all the challenge icons and carve your way through the thick, powdery snowdrifts. Steep is at its best when it lets you just chill and free-ride your way down the mountainside, and that’s never been better than on the Japan map.

Finally, there’s a new story mode of sorts that casts you as an Olympic hopeful with dreams of being the first person in the world to win gold across all three freestyle snowboard events: Slopestyle, Big Air, and Half-pipe. The story actually starts a couple of years before the PyeongChang games, showing your journey to the top as you train and compete in a variety of other competitions across Japan and Korea in preparation. As you might expect, it all builds up to the 2018 Winter Olympics, where—if you succeed—you’ll walk away with three gold medals. 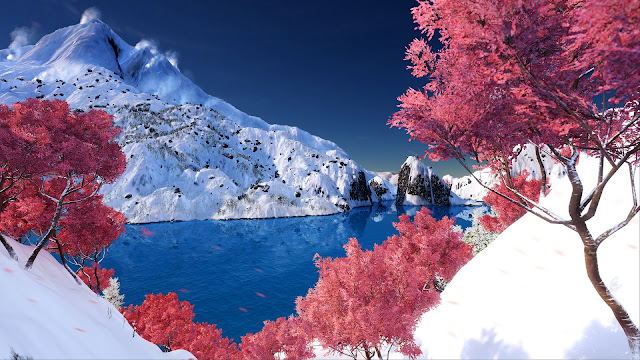 It’s not the most original story nor the most compelling, and the dry narration certainly doesn’t help. In between different chapters, there are short interviews with real-life Olympic athletes talking about their experiences. They’re mildly interesting, but to be honest, I found myself skipping most of them so I could get onto the snow quicker. This story mode is arguably the “main” part of Road to the Olympics, but I also found it to be the weakest part. It seems to be trying to emulate a sports film or sports anime, but it lacks the heart that makes those things tick.

I also have to say that I find it very odd that there isn’t a standalone version of this DLC—at least the PyeongChang part. It’s a very different sort of experience to Steep, being more goal-oriented and structured the way the real-life Olympics are, and I could see it appealing to people who otherwise have no interest in Steep. As it is, it feels quite divorced from the rest of the game anyway, so I don’t think anything at all would be lost by playing it in isolation. Perhaps closer to the games themselves?

Regardless, Road to the Olympics is a solid addition to Steep. Even if the story mode is lacking, the Olympic events and new Japan-based massif are more than enough to make this worth your time, especially with the PyeongChang games on the horizon. It might look like one of those weary licensed games of the PS1 and PS2 days, but fret not, because Road to the Olympics is the real deal.

On the final chapter of Life is Strange: Before the Storm