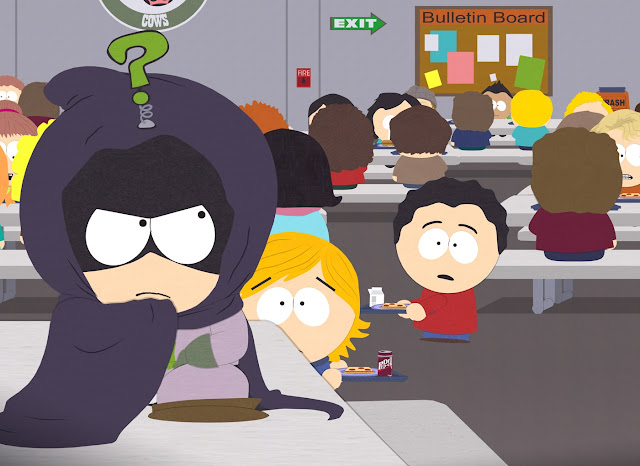 Love it or hate it, South Park has been around for over twenty years now. Matt Stone and Trey Parker have, along the way, explored a lot of current events through a satirical lens with a lot of mixed results. South Park has explored many topics from successfully calling out parents blaming the media instead of themselves as the reason why their children are exposed to profanity, to depicting the Islamic prophet Muhammad, something that is deeply offensive to Islam, and in very poor taste. So, yes, as we all know well by now, South Park tackles the issues it decides are worthwhile head-on and without pulling back any punches.

Related reading: Nick’s review of this game’s predecessor, The Stick Of Truth.

This brings us forward to South Park: The Fractured But Whole (ha!). The sequel to the critically acclaimed videogame, Stick of Truth. The conundrum facing South Park is that it’s a show that makes its money on being relevant to what is happening right now, and it is much harder to stay relevant when development cycles for games tends to go for much longer than an episode of a television show (as of this writing, the current episode of South Park has already dropped a Harvey Weinstein reference). So, in order for the game to remain cohesive with the original game and the overall franchise itself, the majority of The Fractured but Whole is a satirical take on Marvel’s Captain America: Civil War; a film that will remain relevant, as long as the Marvel films themselves continue to break box office records.

The main reason this works in the first place is because the game takes place directly after the last game. Here the kids of South Park have ditched the idea of playing in a Dungeons and Dragons-inspired universe, instead deciding that super heroes are much cooler. This leads to Cartman leading his super hero team against Kenny’s super hero team in a contest for who can get the most Instagram followers. 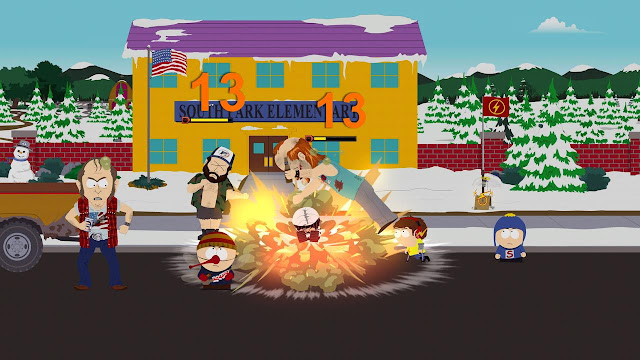 Of course, the game is more than likely only going to be bearable to those who can sit down and enjoy the show. As mentioned before, the humour is crude and in your face and covers a variety of topics. Chances are that if you are religious in any kind of way, the show has probably attacked your religion at some point. The game’s not above toilet humour, either. There’s a lot of defecating in toilets to create fecal matter to use in crafting items. If this kind of stuff isn’t to your liking, I’d stay well clear of this. As a special note for Australians, this is completely uncut as well, so there is no cute Koala or statues this time around to “censor” the content that the local Classification Board wasn’t going to let through.

Once again, the player takes on the role of “The New Kid” who starts the game as the King, about to get the Stick of Truth. Right before reaching it, however, the kids decide the Stick of Truth is no longer important as the pressing matter of losing Instagram followers becomes more important to them. The New Kid then begins his new quest at the bottom of the rung and has to adopt a new persona. It’s a ridiculous way of explaining how the characters can be in a sequel, and yet back to level one, but again, South Park isn’t above the ridiculous when it’ll get a cheap laugh. Initially there are three classes that your character can choose between; Speedster, Brutalist and Blaster. More unlock along the way to keep things interesting.

It is the role of the New Kid to gather followers for Cartman’s “Coonstagram”. He (or she, as you can now create a female character) does this by taking selfies with the townsfolk. It works much like the friendship system from the first game, where some people are more than happy to take a selfie straight away, while others need you to do a job or prove your worthiness for a selfie first. In one instance, I had to assist Stan’s father Randy in discovering who was constantly keying his car and forcing him to buff out the scratches on a daily basis. He proclaims that he’s pretty high up in the social media hierarchy, and gaining a selfie with Randy made it easier to get selfies with other townsfolk. 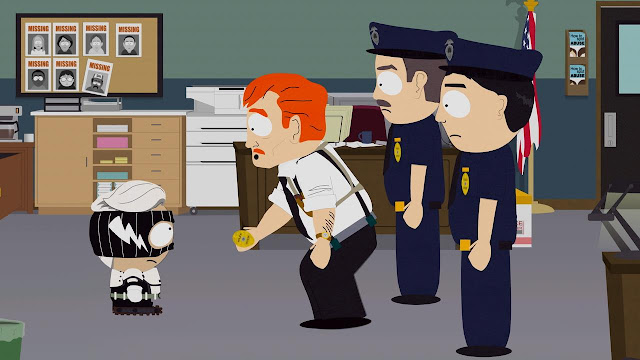 The RPG-inspired battle system is like a grid-based Paper Mario situation. Each person in combat takes turns to perform an action, and those actions can be improved upon by following an on-screen command with the right timing. The battle-party can have a maximum of four characters, which leads to some strategy in mixing up an ideal party. One character can punch an enemy into another character, who then attacks them from behind in a combo attack. The battling seems to be much deeper than the original game, simply from the range of moves and combos that can be done with up to four characters in battle at once.

Building the character is an effort that takes place through the course of the game. Initially, all that is known about The New Kid’s character is his or her class. As time goes on, Cartman helps The New Kid develop his back story, race, religion, his/her weaknesses and more. It’s kind of fun to learn how this child’s pretend character builds over time and is a nice way to put some character development in a protagonist without dumping the entire character’s history in one sitting.

The Fractured But Whole has a completely different developer this time around (Obsidian didn’t take the helm for this one, instead Ubisoft handled it internally by giving it to Ubisoft San Francisco, known for the Rocksmith franchise). Despite that, there has clearly been a lot of work put in to making the game an iteration on the first, and the development team worked closely with Matt Stone and Trey Parker, which really shows in-game. 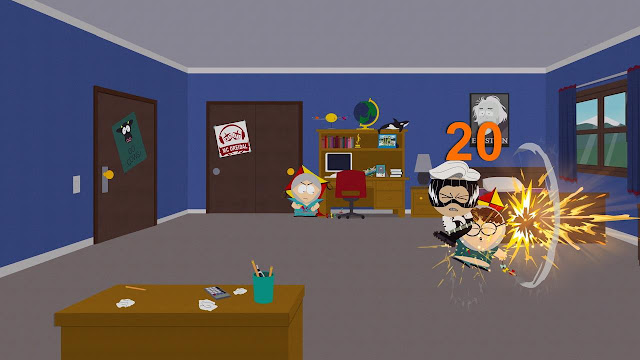 Aside from the potential that someone playing this game just isn’t going to enjoy its style of humour, and the fact that some people are just inevitably going to be insulted by this game in one form or another, there is very little to criticise about The Fractured but Whole. The game plays well, and it perfectly represents its source material. It is honestly very difficult to fault the game for portraying something so well when television and movies rarely make a successful transition to video games.

It’s been a long time since I’ve watched South Park, it would have to be almost ten years at the time of writing. I had an absolute ball with The Fractured but Whole. The story of a superhero civil war, coupled with fighting for Instagram followers is likely going to resonate with a lot of people in 2017. The social commentary in this game is pretty spot on and I got more than my own fair share of laughs, even at my own expense at times as some jokes hit close to home. The fact that this is an RPG that plays really well and has a solid and surprisingly deep battle system is just the icing on the cake.