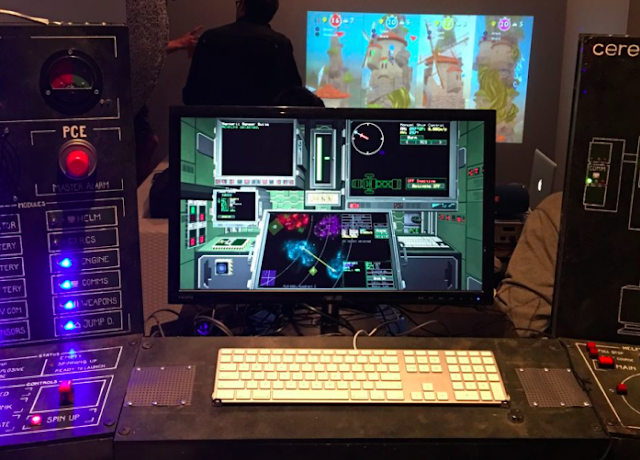 Objects in Space is a remarkably ambitious game, and one that has been in development for some five years now. It’s a space trading game, with plenty of stealth mechanics, but most noteworthy of all is that it has been designed around a very unique control system; you’re actually encouraged to build your own cockpit, complete with flashing lights and buttons to press, to give you that full immersive experience. This idea has been so popular that 505 Games has picked it up for publication.

This week for our fast five, we’ve interviewed one of the leads on the Objects in Space project; Leigh Harris. Leigh’s been a champion for the local games industry for many years now, having produced smaller hits like Towncraft and Metrocide before moving on to Objects in Space. He’s even found time to give back to the games industry, by being a teacher at one of the local colleges for game development even as he’s been working on his games. Leigh’s pure commitment to video games is genuinely inspiring.

Matt S: What are you working on at the moment, and how’s it going?
Leigh H: We’re working on Objects in Space, an open world space trading game with a top-down 2D representation of space and point-and-click stealth mechanics. We’ve just signed a partnership with 505 Games to help bring the game to market early next year, so I’ve literally just quit my other part time job teaching game design at the Academy of Interactive Entertainment in order to join my sister in working on the game full time. It’s great being able to spend a full five days per week on something I truly love, and we’re just currently adjusting to our new working pattern.

It’s been tricky making this game up until now, because open world games tend to sink or swim based on whether or not they’re more than the sum of their parts. And you need a lot of moving parts to get an open world working properly – vertical slices are nigh on impossible. So we’ve been building it based on believing in ourselves rather than on a proof of concept from early on. I mean sure, we were able to make a short combat scenario and see if the shooty-bang aspects of the game were fun or not, but in terms of the large-scale meta game of the open world itself and the trading/upgrade economies… well we’re still finding out how well that’s working now. For a game we’ve been working on here and there since late 2013, that’s a long time to wait before really knowing if your ideas hold water.

Matt S: What do you think about the state of the Australian game development industry at the moment?
Leigh H: We’re still lacking in the same government support other sectors of the arts enjoy right now, and it seems a little futile to expect our current federal government to increase arts spending any time soon. That doesn’t mean that organisations like the Game Developers Association of Australia or the Interactive Games and Entertainment Association shouldn’t still be pushing and making waves where they can – building and maintaining relationships for whenever the next mob take power – but still, yeah, it can be a little disheartening.

What’s not disheartening, however, is the stunning and continued prevalence of indie game developers!

I just went to Beer and Pixels last night (Sydney’s monthly game developer meet up) where I hung out with countless other folks who make great things and push envelopes in a bunch of different ways. From hugely commercially successful games to those breaking new ground in terms of covering topics and gameplay styles not seen before in games, our scene continues to impress and inspire me. And that’s in Sydney of all places, widely considered to be the poor cousin to Melbourne’s thriving scene, where there are an even larger number of active and creative works being undertaken.

Matt S: What recent game would you recommend to people at the moment, and why?
Leigh H: Tacoma – has to be Tacoma. This is the second big game from Fullbright, the creators of Gone Home. I’m obsessed with finding developers who are showing me something I’ve never seen before. I’m 33 (wow, am I really that old now?) and I’m bored to death of seeing the same damn game wrapped in different packaging again and again. So I’ll shout from the rooftops about any game where people try and do something genuinely new.

So in 2013, Gone Home stripped away reflex-based mechanics and relied entirely on the strength of its narrative. I know it wasn’t the first walking simulator, but it was *my* first. Short two to three hour experience which packed a powerful punch – great stuff.

With Tacoma, Fullbright are building upon that and trying something new. Similar in tone, it’s also a game with earnest characters but the game drips with foreboding. It’s again a two to three hour game with limited mechanics (a time-manipulation aspect is involved, but again there’s no reflex-based pressure).

What excites me (other than another strong and punchy narrative experience) is that I get to look at what the people at Fullbright thought made Gone Home so great. By seeing what they chose to expand on and embellish and what they didn’t, I get to see if they themselves understand what made the original such a wild success.

I never tend to give others that opportunity, since we keep on making games which are vastly different than our last one(s) – sorry about that.

I love and hate at the same time that it’s so easy for people to make games now and get themselves onto the key app stores. I love it because the opportunities for self-expression and the bottomless well of creativity means there’s always something new out there and people are able to take massive risks. I hate it because finding out which games are doing that and which are me-too clones of existing things is tedious. Oh and of course it makes it way harder to stand out from the crowd. Doesn’t bother me too much though, since Objects in Space is such a weird game, but I can totally see potentially great games sinking in the noise, which irks me when a lot of that noise is opportunistic market-driven releases rather than works from the developers’ hearts.

And I’m really enjoying the increased diversity of developers, players and games out there. Part of my wanting to not see the same damn thing every time I play a game is that I don’t want our medium to stagnate. Allowing new voices and people from different backgrounds time in the spotlight is a great way to keep things fresh and keep on evolving. The more the merrier, in short!

What I wish I could change about that would be to hasten the drowning out of naysayers who continue to play gatekeeper and try and keep gaming by and for one particular demographic. It’s painful to watch, genuinely hurts people, and exposes an ugly side of people which I just can’t stand. If I could change one thing about the games industry, it’d be the multitude of large and small factors which keep minority voices out and maintain a status quo. A greater diversity of voices means a greater diversity of games, and I’ll never understand how people can be opposed to letting creativity flourish in this way.

Matt S: Hatsune Miku; yes/no?
Leigh H: Haha! I have to admit, I had to Google that one (sorry Bing). Seems like my kind of ridiculous. Sometimes art has a purpose, other times you need dada bizarreness when the world doesn’t make sense. 2017 is one of those times. I approve.

Films from Asia that you should watch: Red Cliff